Braun Strowman: Bray Wyatt is a unique talent and I'd love to work with him 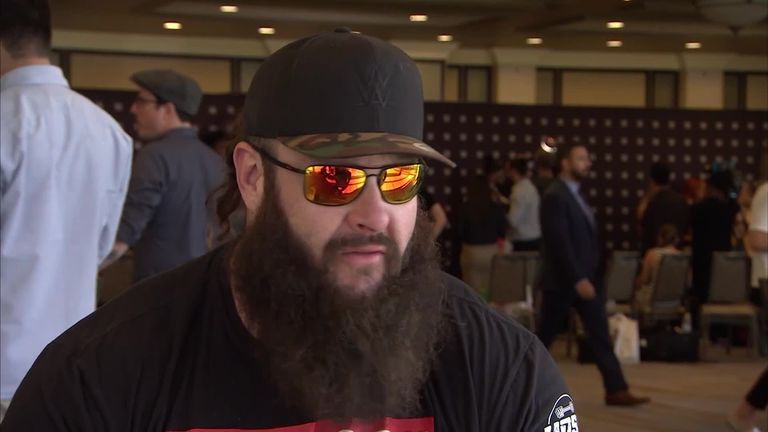 Braun Strowman has praised Bray Wyatt's unique abilities and says he would love to be involved in a program with The Fiend.

Wyatt has recently undergone an overhaul, played a split-personality character with a children's television-style side and a much darker one, in which he wears a mask and randomly attacks people.

'The Fiend' half of the persona will take on Finn Balor at SummerSlam on Sunday night, live on Sky Sports Box Office, and Strowman is looking forward to seeing one of his best friends in the business step back in the ring.

Don't miss the biggest party of the summer as WWE stages SummerSlam live on Sky Sports!

"Morale's down when Bray's not around," Strowman told Sky Sports. "The work he does in the ring and on the mic and character-wise, there's nobody who can match up to him.

"So to have him back is only going to bring more ratings and eyes to the show and for me, being one of his best friends and the godfather to his son, Bray and I are very close.

"We'll see what happens with him and Finn Balor but I would 100 per cent like to be involved with him. He puts butts in seats and you never know, you may see the Fiend against the monster that he made at some point."

Test your knowledge of all things SummerSlam with Sky Sports' exclusive quiz!

Strowman's friendship with Wyatt goes back to his start in WWE, when he was paired with the macabre character as part of his Wyatt Family 'cult' - and the guidance he provided back then will never be forgotten.

"When I came in and Vince decided to put me with the Wyatt Family I'd had seven matches - my first match on television was the eighth match of my career," he said.

"They threw me in with those guys because not only are they unbelievable hands, they'd been in the business for a very long time and they took me under their wings.

"They threw me in the deep end of the pool and it was 'sink or swim kid' and I've been keeping my nose about water ever since."