As part of a new series of articles produced exclusively for Sky Sports by NBA superfans from across the UK and Ireland, we look at the state of play for every franchise with preseason now under way ahead of the new campaign

Basketball fan and Sky Sports producer Luther Odame assesses the 2021-22 season for the Pelicans, and then casts an eye ahead to the 2022-23 campaign for New Orleans.

Where my love for the NBA and the Pelicans came from...

I'm Luther Odame and I'll admit from the outset I'm not actually a Pelicans fan, but due to a late scratch from the person who was meant to do this piece I jumped in to help the editor out. (Ed: I am very grateful!)

I do admire the team, though, have watched them plenty and reckon they're stacked with talent, so I look forward to sharing my views.

I work at Sky Sports as a producer and I'm delighted that we'll remain the home for the NBA again next season, and no doubt the Pelicans are going to be one of the exciting teams to watch. 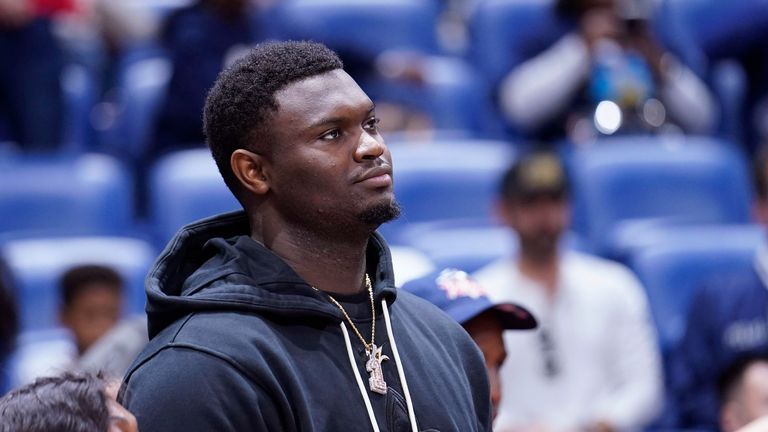 When it comes to the Pelicans there's one player who sticks out. He may not play often but he's box office. He jumps out of the gym like no other and he's a walking 26 points per game. That's Zion Williamson - the franchise. However, missing the entirety of last season, and not really being able to string multiple games together, has placed Zion out of the public eye.

In that time, Brandon Ingram continued his All-Star trajectory, CJ McCollum was acquired through trade and a player like Jose Alvarado has become a fan favourite due to his patented sneaky steals. However, I don't doubt that once Zion returns and causes the Smoothie King Center to bounce, he will return to the forefront of Pelicans Nation's hearts.

Grade for last season: B+

2021-22 was an interesting season for New Orleans sports as a whole. The Saints struggled in what was the team's first season without future Hall of Famer Drew Brees since 2005/06. The Pelicans lost Williamson for what was originally meant to be weeks, but slowly turned to months and ended up being an entire season.

The mid-season acquisition of McCollum was a very big move. It helped the team in the short term and looking forward to the return of Zion, it allows the team to establish a big three consisting of three former All-Stars.

Several moments in the year pop out to me: the emergence of Herb Jones, Alvarado and his rough relationship with Chris Paul; the 105-101 play-in victory against the Clippers to put the Pelicans in the playoffs; and the first four games of the playoffs themselves.

However, the Pels were lucky to be tied with the reigning Western Conference champions after four games. The season was a success, and with Zion healthy, the season could only have been better.

Assessing the offseason for the Pelicans

Due to the young nucleus possessed by NOLA, there was no need for any major moves. One of the key elements the Pelicans needed, they filled mid-season with the acquisition of McCollum.

A key issue addressed by the team this offseason was Williamson's contract. How do you justify giving a max extension to a player who has played 85 out of a possible 236 games?

It's quite simple. Zion's upside is so strong that you'd rather be wrong and have him draining money in your squad than not take the risk and see him flourish elsewhere. If he stays healthy, he's a few years away from being an MVP candidate and it's that simple.

The Pelicans agreed and handed him a five-year, $231m contract. However, the deal did not come without controversy. Williamson's contract included a clause that states he will have regular weigh-ins to measure his combined weight and body fat percentage. If it exceeds a total of 295, guaranteed money in his extension can be reduced. Regardless, the fanbase can be happy he's tied down for now.

Points of note from the 2022 NBA Draft

The 2022 draft class wasn't the most exciting. This wasn't a class like 2003, and I highly doubt there will be any life-changing players in this class. The Pelicans addressed this by using the Lakers pick to acquire 6ft 8ins guard Dyson Daniels.

Big and long for the position, Daniels may grow into the rotation - allowing him minutes with Williamson, McCollum, Ingram and others. His height also allows him to slide into the small forward position, while also allowing NOLA to experiment with a big line-up. 6ft 3ins McCollum, 6ft 8ins Daniels, the 6ft 7ins big body of Williamson and Ingram, who reportedly grew to 6ft 11ins after initially being listed at 6ft 8ins coming into the NBA. They'd round up the line-up with Jonas Valanciunas who is just under 7ft and weighs 265lbs. In today's NBA, this five have the potential to cause some issues for smaller teams.

The Pelicans' aims for next season

Going into next season, the Pelicans should be looking to be a playoff team. Last term they were in the play-in places as the ninth seed, meaning pre-Covid they would have missed out on the playoffs. The West is stacked, and therefore being a top six-seed may be difficult. However, a team like the Jazz is set to take a step back and that frees up a space for the Pelicans.

Anything above the eighth seed will be a success for the team. They have assets to make moves if any disgruntled All-Stars become available and this may increase their hopes for the season, but, as presently structured, eighth in the Western Conference is a realistic goal.

Three predictions for the season ahead...

Why should people watch the Pelicans?

The Pelicans will be must-see TV with a healthy Williamson. That, alongside Ingram's KD-lite playing style and McCollum, who can get scorching hot at any moment, will ensure fun basketball all season for the team. They may be the biggest wild card in the league, with their ceiling and floor being so far apart. You will be seeing Pelicans highlights on social media, on your TV and everywhere you look - so why not see them when they happen?