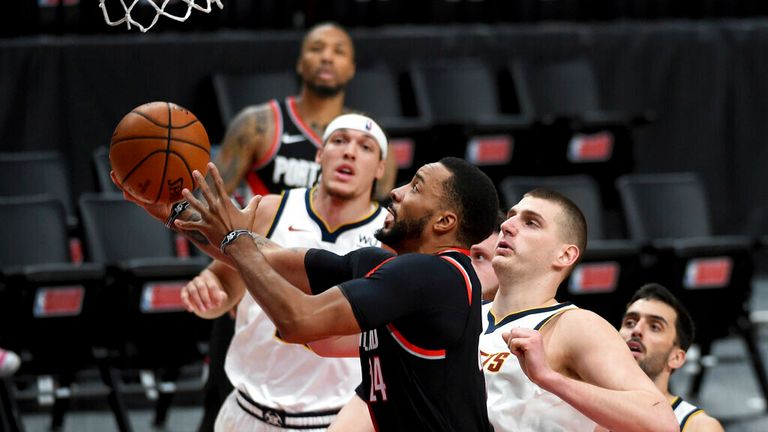 Norman Powell scored 29 points and CJ McCollum added 21 to lift the host Portland Trail Blazers to a 115-95 win over the Denver Nuggets on Saturday in Game 4 of their Western Conference first-round series.

Jusuf Nurkic had 17 points, Damian Lillard was restricted to scoring just 10 points and 10 assists and Carmelo Anthony scored 12 points on his 37th birthday to help the Trail Blazers even the series at two wins apiece.

Game 5 is Tuesday night in Denver.

Nikola Jokic had 16 points and nine rebounds and Monte Morris and Facundo Campazzo added 12 points each for the Nuggets. Denver, who shot just 34.0 percent, went cold in the third quarter when they made just seven of 24 attempts while being outscored 36-19.

Portland led by eight after the first quarter but the Nuggets tied it at 36 early in the second. The Trail Blazers increased the lead to 12 before settling for a 57-47 half-time advantage.

Portland scored the first 10 points of the third quarter while Denver struggled on the offensive end. The Nuggets missed 11 of their first 13 shots to start the second half and missed five straight 3-pointers until Jokic broke the string to cut the deficit to 73-54 with 6:45 left in the period.

Campazzo made a layup on the next possession for Denver's only two field goals in more than five minutes. Powell's dunk put the Trail Blazers ahead 78-56 and prompted a timeout by the Nuggets with 4:48 left.

Two free throws by Nurkic, a 19-foot jumper by Anthony followed by 3-pointers from Anfernee Simons and Anthony made it 88-58 with 2:25 left in the third quarter.

JaMychal Green was hit with a technical foul and Lillard sank the free throw. Rondae Hollis-Jefferson tipped in a miss by Anthony to make it 91-58.

Denver's Paul Millsap scored six points at the end of the period to make it 93-66 heading into the fourth, so a number of stars sat and this fascinating series looks like it's going every chance of going to the wire, just as it did between the seam teams two years ago.

Want to watch even more of the NBA and WNBA but don't have Sky Sports? Get the Sky Sports Action and Arena pack here