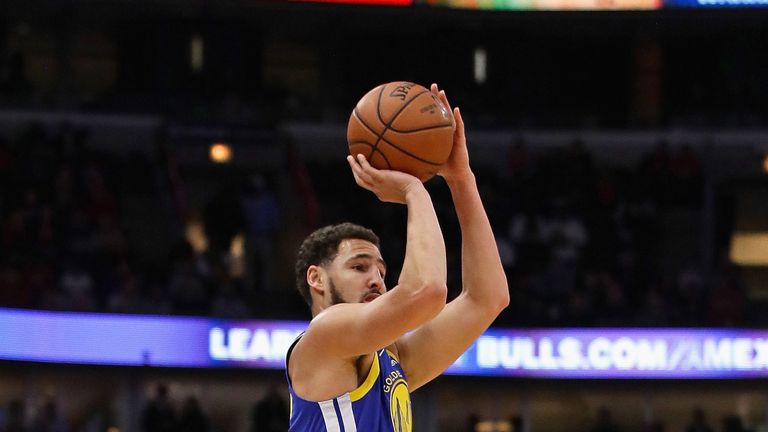 Klay Thompson scored 52 points on his way to an NBA-record 14 three-pointers in the Warriors' win on Monday.

Thompson finished 14 of 24 from beyond the arc. He exulted and held up three fingers with each hand after his record-breaking three-ball dropped through the net with 4:53 remaining in the third quarter.

The shot moved Thompson past team-mate Steph Curry, who sank 13 three-pointers against the New Orleans Pelicans on November 8, 2016. Curry did not seem to mind as he laughed with team-mates on the bench late in the game.

"Even before I went out for the second half, Steph looked at the box score and said, 'Go get it,'" Thompson said.

"That just shows you the unselfishness that is within him. The same with...everyone else that was out there on the floor trying to find me and give me good looks."

In 26 minutes of action, Thompson made 18 of 29 field-goal attempts and grabbed five rebounds.

Thompson's 52-point haul was eight points short of his career-best performance. He erupted for 60 points in a December 2016 win over the Indiana Pacers.

The Warriors shooting guard had previously scored 52 points in a January 2015 Warriors rout of the Sacramento Kings, a performance in which he scored 37 points in a single quarter.