With the 2019-20 NBA season on hold for the foreseeable future, it is an opportune moment to explore a selection of the NBA's most iconic numbers.

In the latest feature in our series, we take at look at a trio of iconic NBA players who wore No 34. Current league MVP Giannis Antetokounmpo, who wears No 34 himself, will hope to match or better the achievements of these NBA legends over the next few seasons.

ICYMI - Join Ovie, Mo and Jaydee and watch this week's edition of Heatcheck

Shaq started his NBA journey with the Orlando Magic wearing No 32 (and won a title using that number with the Miami Heat) and finished sporting as No 36 for the Boston Celtics - but it is his time sporting No 34 for the Los Angeles Lakers that marks the pinnacle of his career.

Signed during the summer of 1996, Shaquille O'Neal spent eight seasons with the Lakers. He, along with Kobe Bryant, helped lead the purple and gold to a 'three-peat' of NBA titles from 2000-02. 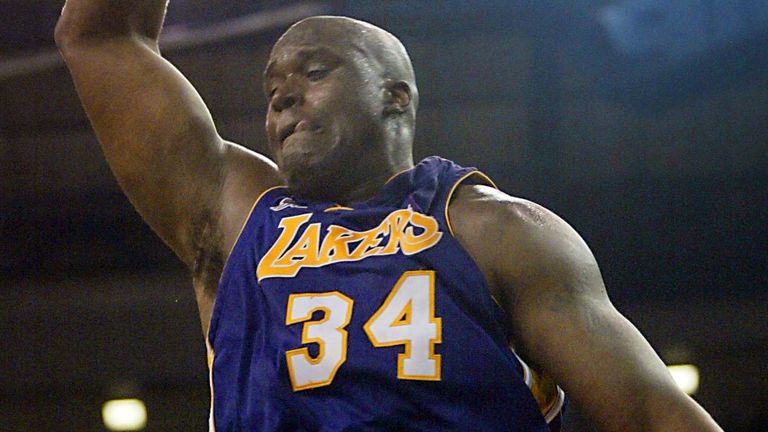 During the first title run, O'Neal won the regular-season MVP award, falling one vote short of being the first player ever to win the award unanimously. He captured the NBA's scoring title (29.7 points per game), while finishing second in rebounds (13.6) and third in blocked shots (3.0).

In the Finals, O'Neal guided LA past the Indiana Pacers in six games. The 7ft 1in center posted three 40-plus point games, averaging 38 points and nearly 17 rebounds, emerging as the NBA Finals MVP, too.

The following year - 2000-01 - the Lakers matched up with the Philadelphia 76ers in the Finals and dropped the first game at home, ending their quest to become the first franchise to finish the playoffs undefeated. They rolled through the next four games, though, finishing with a 15-1 overall playoff mark. O'Neal guided the Lakers, averaging 33.0 points and almost 16 rebounds, to go along with five assists and three blocks, leading to his second straight NBA Finals MVP award.

One of the best ever, said current Houston Rockets coach Mike D'Antoni, who coached O'Neal in Phoenix for one year. "One of the best big men ever. He changed basketball. Everything you do - if you're preparing against his team - you talk about Shaq 99 per cent of the time. There are very few guys you spend the whole scouting meeting talking about, and he's one of those guys."

As a player, Charles Barkley was perhaps the greatest anomaly in basketball history. Listed at 6ft 6in but actually closer to 6ft 4in, he played power forward as well as anyone in the history of the NBA, often dominating players half a foot taller.

The numbers back him up. Along with Kareem Abdul-Jabbar, Wilt Chamberlain, Karl Malone, Barkley is one of only four players in NBA history to have compiled at least 20,000 points, 10,000 rebounds and 4,000 assists. 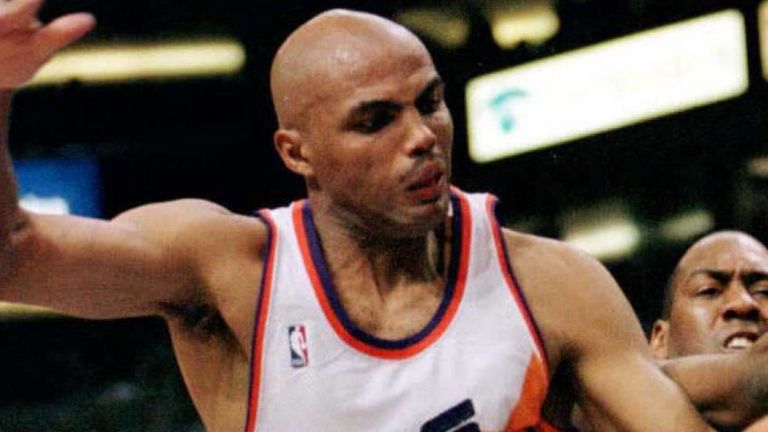 With the Phoenix Suns and San Antonio Spurs tied at 100-100, Charles Barkley sinks a game-winning shot over David Robinson to send the Suns to the 1993 Western Conference Finals

Barkley was viewed as an oddity coming out of college. Nicknamed the 'Round Mound of Rebound', many considered him an undersized power forward with rebounding as his only discernible basketball skill.

Undeterred, Barkley quickly buried that reputation when he began playing for the Philadelphia 76ers. It was not rare to see the neophyte Barkley grab a defensive rebound amongst a crowd of players, rumble downcourt with the ball and finish with a monster slam.

Barkley spent eight seasons in Philadelphia, but the team's best showing during his tenure was in his first year, when the Sixers went 58-24 in the regular season and advanced to the 1985 Eastern Conference Finals, where they lost to the Boston Celtics in five games. After several disappointing early-round playoff defeats, the Sixers failed to make the postseason in 1991-92 and Barkley wanted out of the City of Brotherly Love.

Barkley's second act came in Phoenix, where he found new life with Suns. In a magical first season in 1992-93, he won the NBA MVP while leading Phoenix to the league's best record of 62-20 and a berth in the NBA Finals, where the Suns lost to Michael Jordan and the Chicago Bulls in a memorable six-game series. 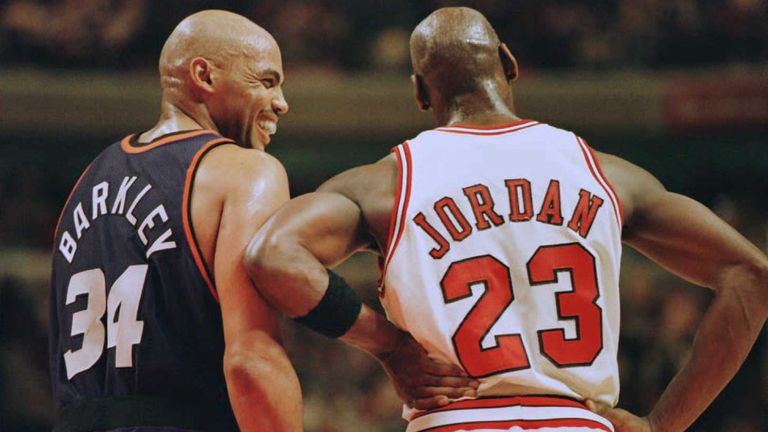 Although over the next two seasons Barkley struggled with nagging injuries, he maintained a high level of play. The Suns reached the conference semi-finals in 1994 and 1995, but lost to the Houston Rockets, the eventual NBA champs.

A 1996 trade sent him to the Rockets where he was once again rejuvenated, but the chance to grab that elusive championship ring never materialised. After announcing that his fourth season in Houston would be his last in the NBA, his NBA career ended sooner than expected.

Barkley left the game with 23,757 points (22.1 per game) and 12,546 rebounds (11.7 per game). He was inducted into the Basketball Hall of Fame in 2006 and has carved out a post-playing career as the NBA's most outspoken and entertaining analyst.

During his 18-year career, Nigeria-born Hakeem Olajuwon staked his claim as one of the greatest players in NBA history. Long considered a physical marvel since his days at the University of Houston, his aesthetic and productive play - highlighted by his Houston Rockets' back-to-back NBA titles - earned him a place among the game's best.

In 1993-94 he had a storybook season, becoming the first player to be named NBA MVP, NBA Defensive Player of the Year and NBA Finals MVP in the same season, a feat only previously achieved by Michael Jordan. Speaking at his basketball camp in Birmingham, Rockets legend Hakeem Olajuwon explains why he is living in the UK and hails the freedom of modern NBA play

The following season he rallied the Rockets from a sixth seed in the playoffs to their second straight NBA crown, making Houston the fifth NBA franchise ever to win back-to-back titles.

Drafted No 1 overall in 1984, Olajuwon finished second to Michael Jordan in Rookie of the Year voting in 1985 after putting up 20.6 points and 11.9 rebounds. The next year, as part of the Rockets' Twin Towers line-up alongside the 7ft 4in Ralph Sampson, he powered the Rockets into the 1986 NBA Finals, where they fell to Larry Bird's Boston Celtics in six games.

Olajuwon's production simply increased as he developed into one of the game's top big men. He led the Rockets in 13 statistical categories, including scoring, rebounding, steals and blocked shots. He began a string of selections to the All-NBA First Team (1987 to 1989) and NBA All-Defensive First Team (1987, 1988 and 1990), and was the starting center for the Western Conference All-Stars four years in a row (1987-90).

In 1989 he became the first player to finish among the league's top 10 in scoring, rebounding, steals and blocked shots for two straight seasons. That same year against the Milwaukee Bucks, Olajuwon had 18 points, 16 rebounds, 11 blocks and 10 assists, recording the rare quadruple-double. He also led the NBA in blocked shots in 1989-90 with 4.59 per game and in 1990-91 at 3.95 per contest. 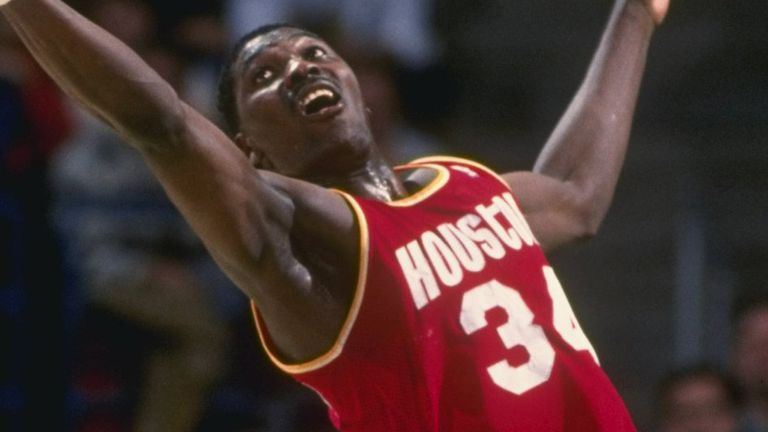 Olajuwon became a naturalised US citizen in April 1993 and finished second to Charles Barkley in MVP voting shortly afterwards, He raised his game once more in the 1993-94 season, introducing a new line of spins, fadeaway shots and jumpers that made virtually unstoppable on offense.

The man nicknamed 'Hakeem the Dream' had now developed a set of patented moves involving great footwork with ball and head fakes with either his back to the basket or facing opponents abusing defenders. All of which became known as the 'Dream Shake'.

In that memorable 1993-94 season, Olajuwon won both the league and NBA Finals MVP awards while leading Houston to their maiden NBA championship. The Houston center also earned his second straight NBA Defensive Player of the Year award. The Rockets won the title after a gruelling seven-game defeat of the Patrick Ewing-led New York Knicks. Olajuwon was simply brilliant in the Finals, contributing 29.1 points, 9.1 rebounds and 3.9 blocks per game.

In the 1994-95 season, Olajuwon posted had a career-best 27.8 PPG along with 10.8 RPG. He also became the Rockets' all-time leading scorer when he passed Calvin Murphy early in the season. In February, Olajuwon was reunited with college team-mate Clyde Drexler, who came over from the Portland Trail Blazers in a trade for forward Otis Thorpe.

In the playoffs, Olajuwon averaged 33.0 points and demolished 1995 MVP David Robinson and the San Antonio Spurs in the Western Conference Finals.

Then in the 1995 NBA Finals, Olajuwon and the Rockets met the Orlando Magic and the league's great young center, Shaquille O'Neal. The two big men had similar numbers as Olajuwon averaged 32.8 points, 11.5 rebounds and 5.5 assists to O'Neal's 28.0 points, 12.5 rebounds and 6.3 assists. But the Rockets swept the series, making Houston the fifth NBA franchise to win back-to-back titles. For his spectacular play, Olajuwon was awarded his second consecutive NBA Finals MVP award.

Though he remained productive in the next two seasons, injuries impacted the latter stages of Olajuwon's career. He retired in 2002, aged 39, having left Houston after 17 seasons for a one-year stint with the Toronto Raptors.

In 2008, Olajuwon was inducted into the Basketball Hall of Fame. His old rival Ewing was part of the class, too.

Following his playing days, Olajuwon spent many NBA offseasons teaching some of the league's young stars - from Kobe Bryant to Dwight Howard to Amar'e Stoudemire - ways to improve their footwork in the post.