With the 2019-20 NBA season on hold until July 30, it is an opportune moment to explore a selection of the NBA's most iconic numbers.

In the latest feature in our series, we take a look at two of the NBA's most iconic players who wore No 41.

When you consider Dirk Nowitzki's accolades across 21 seasons with the Dallas Mavericks, it's easy to forget how tough the 'Tall Baller from the G' initially found the transition to the NBA.

In a Zoom interview with Mavs.com in May, Nowitzki reflected: "I found it really difficult. My body just wasn't quite ready for the pounding. If I wasn't comfortable off the floor, for me it was very hard to show or be comfortable on the court, so I had to get adjusted here my first year. Find an apartment, get a dishwasher and a bed, get a car, learn to get around. I think those things for me were very important." 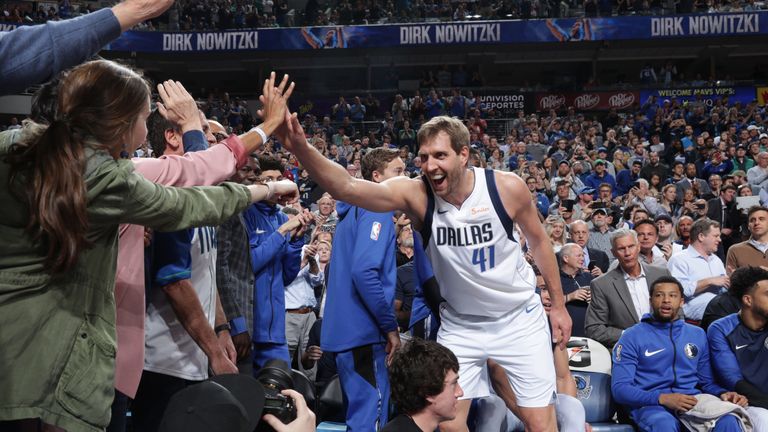 Thank goodness for Dallas he did so. Once settled, Nowitzki racked up 14 All-Star appearances, 12 All-NBA selections, a league MVP award (2006-07) and the unforgettable double of an NBA title and Finals MVP in 2011. He finished his career with 31,560 points and currently sits sixth - one place behind Michael Jordan and one ahead of Wilt Chamberlain - on the NBA's all-time scoring list. Not bad for a German kid whose original sporting ambition was to become a tennis player.

Nowitzki's ability to develop the physical toughness, mental strength and resilience needed to become an elite NBA player is best exemplified by his response to two heartbreaking defeats in the mid-2000s.

In the 2006 playoffs, Nowitzki averaged 27.0 points per game and led the Mavericks to a spot in the NBA Finals. Dallas took a 2-0 lead against the Miami Heat before Dwyane Wade took over the series. The Mavericks lost four games in a row, and while team owner Mark Cuban remains bitter about the manner in which those games were officiated, the Mavs collapsed with the title within their grasp.

The following season, Nowitzki averaged 24.6 points per game, shooting over 50 per cent from the field, over 40 per cent from three-point range and in excess of 90 per cent from the free-throw line, to lead Dallas to a 67-15 regular-season record and the No 1 seed in the West. Nowitzki was named MVP but a shock first-round playoff loss to the 'We Believe' Golden State Warriors meant the Mavericks were dumped out of the postseason before Nowitzki was presented with the award (the regular-season award had been presented during the second round of the playoffs for the three previous years).. 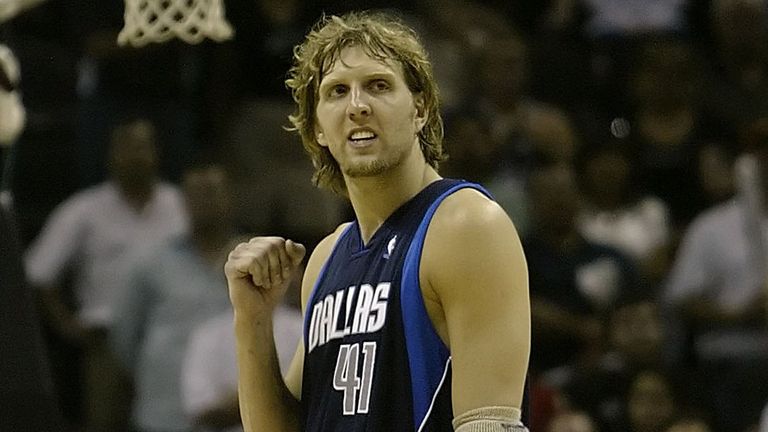 "I always go back to '06, '07 with some of the tough playoff losses," he told mavs.com. "I think I learned from that. I learned from the tough losses, and there'll always be tough losses. You're never always going to win. At the beginning you're depressed, you're sad and you're embarrassed, and you go through this phase and then eventually you get fired up, and the loss motivates you to push harder to become better."

Nowitzki made good on those words in the 2011 Finals against LeBron James and the Heat, a season where, he said, "everything just kind of came together". 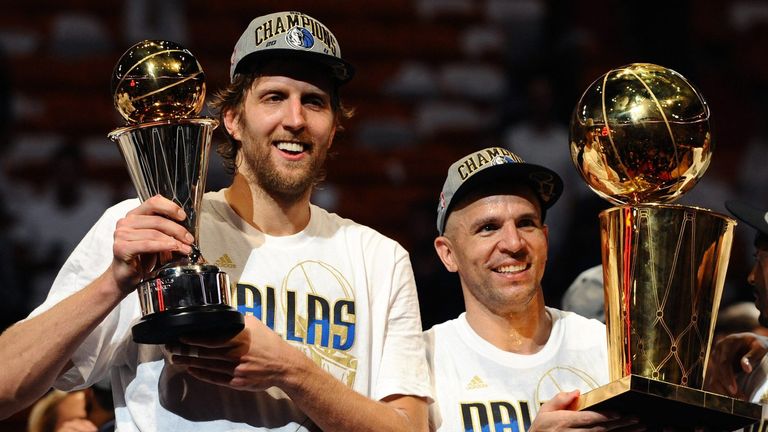 Embracing the role of the underdog against the Heat's Big Three of James, Wade and Chris Bosh, Nowitzki inspired the Mavericks to a 4-2 series win and erased the hurt of his previous postseason disappointments. Few will forget him racing off the court at the conclusion of Game 6 for the sanctuary of the locker room as he fought to keep his emotions in check.

Sky Sports NBA analyst Mike Tuck hailed Nowitzki as the best player to come out of Europe, while adding the caveat we will have to wait and see where Giannis Antetokounmpo and Luka Doncic end up.

"Nowitzki was just legendary. He transformed the NBA game," Tuck said. "He was not that typical European big man coaches just stuck down in the paint. He was the guy who could stretch the floor, shoot it and come through in pressure situations. He was the go-to guy for the Dallas Mavericks. Playing 20 years in the league, all for one team, bringing them their sole NBA championship, he wrote a lot of Mavericks' folklore.

"To go along with that, he introduced the iconic one-legged fadeaway jump shot. Everybody has that in their arsenal now - I, along with everyone else, started 'doing the Dirk'. 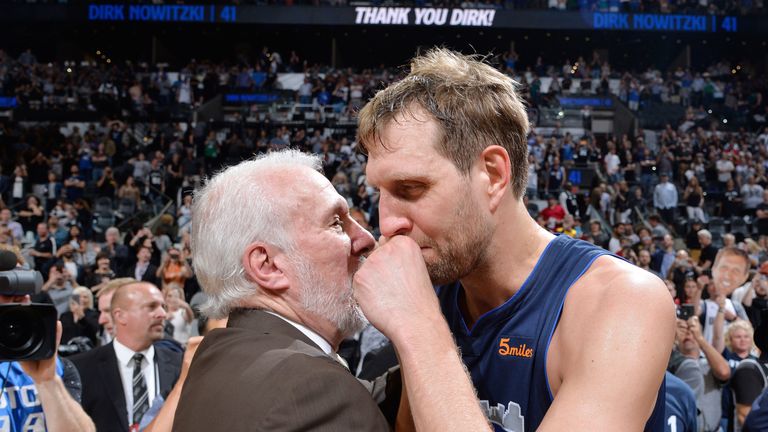 During his Hall of Fame career, Wes Unseld seemed to have been chiselled from a block of granite, with a stoic demeanour and an iron resolve to win. A 6ft 7in bull of a center, he forged his reputation on relentless rebounding, bone-jarring picks, and laser-beam outlet passes. He did all the unspectacular things that led to glamorous victories.

Unseld was the league's MVP and Rookie of the Year in 1968-69 - a feat achieved by just one other player, Wilt Chamberlain - and a five-time NBA All-Star who captained the Baltimore and Washington Bullets to four NBA Finals appearances in the 1970s and to a championship in 1977-78. He was intelligent on and off the court, and over the course of his career he came to personify the virtues of hard work, dedication, and courage.

Unseld passed away at age 74 on June 2. His family announced his death via a statement released by the Washington Wizards. 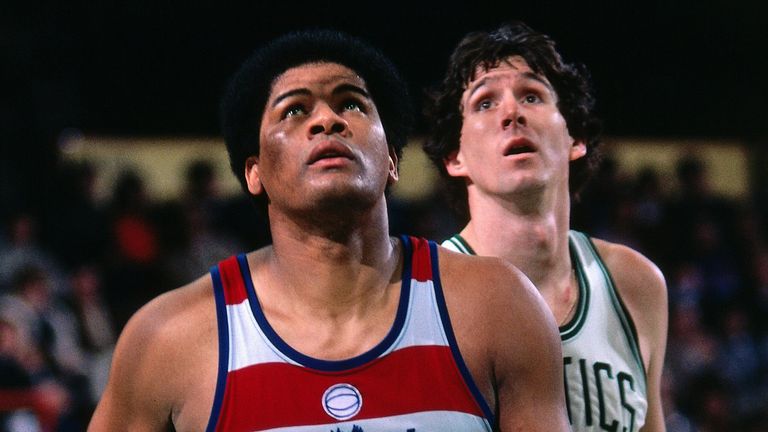 The NBA family mourns the loss of Hall of Famer Wes Unseld, one of the 50 greatest players in NBA history

"Those of us who were fortunate enough to spend time with Wes knew him as a generous and thoughtful man whose strong will was matched only by his passion and drive for uplifting others," current Wizards GM Tommy Sheppard said. "His physical prowess, undeniable talent and on-court demeanour may have struck fear in opponents throughout the NBA, but he will be remembered best as a mentor, leader and friend."

Unseld averaged 10.8 points and 14 rebounds for his NBA career. Aching knees forced him to stop playing in 1981, but he remained with the franchise that would eventually retire his No 41 jersey. He moved into a front office position with the Bullets, then coached the team for seven seasons in the late 1980s and early 1990s.

Perhaps the most important figure in the history of the Baltimore/Washington franchise, Unseld was elected to the Naismith Memorial Basketball Hall of Fame in 1988. In 1996, he was named to the NBA 50th Anniversary All-Time Team.

"I never played pretty," Unseld said on the day he was elected to the Hall. "I wasn't flashy. My contributions were in the things most people don't notice. They weren't in high scoring or dunking or behind-the-back passes."

Wizards owner Ted Leonsis said: "We all admired Wes as the pillar of this franchise for so long, but it was his work off the court that will truly leave an impactful legacy and live on through the many people he touched and influenced throughout his life of basketball and beyond."