Sabrina Ionescu: WNBA No 1 pick under the microscope

Even before Sabrina Ionescu was rudely welcomed to the WNBA by the Seattle Storm, the No 1 draft pick knew she had a long way to go.

“Whether it’s getting healthier, stronger, quicker, faster; being able to create my shot better; being able to finish in the key and in transition; or continuing to make an impact with my passing. I think I’m going to need to improve every aspect of my game - especially entering the best league in the world.”

Ionescu spoke to the media one day before her professional debut, when the 2018 WNBA champions made life difficult for her. That is not to say she played badly, but her 12 points, six rebounds and four assists clearly showed that her college averages of 17.5, 8.6 and 9.1 are going to be harder to come by in this rookie season.

She might have been nervous, but Liberty general manager Jonathan Kolb felt his guard would not be the only one with butterflies in the season opener.

“For the veterans like Breanna Stewart and Sue Bird returning to the court [after being injured last year] there’s going to be nerves, and just having sports back in general. It’s a beautiful part of the game. You might have some turnovers early on, but it will settle down. I think it’s good to be nervous.”

On most occasions, when Ionescu had the ball in the middle of the court, Seattle would send a double-team to pressure her, and in pick-and-roll coverage, the second defender would hedge hard or switch aggressively - they would not let Ionescu sniff any part of the lane. The rookie would regularly give the ball up to a team-mate or struggle to turn the corner. She had four turnovers in the game.

The approach when Ionescu has the ball is pressure: brief double to get the ball out of her hands, then a switch when she gives it up and another switch on the PnR. The. Stewie pushes up and forces a wide dribble for a poke away and an easy turnover. Storm are well prepared pic.twitter.com/Af2z06VZ6w

But Ionescu will see this all season, and New York’s head coach Walt Hopkins will learn from it. If there were nerves, they dissipated when she grabbed an offensive rebound and put it back for her first WNBA points. It was the type of automatic basketball act that is part of Ionescu’s DNA, and it triggered a series of beautiful moments that led to good basketball, including a stunning pass that thread the needle between three defenders and gave fellow rookie Jocelyn Willoughby an open lane.

GB Basketball’s Holly Winterburn was a team-mate of Ionescu on the Oregon Ducks college team last year, and the former Leicester Riders guard remembers what Willoughby must have felt.

Winterburn said: “[Ionescu’s] passing is world class. She just knew when and where to pass the ball in every situation. It’s the type of talent that can’t be taught, and that’s what makes her so special.”

A scrambling Storm defense caught up and fouled Willoughby on the shot, but it was part of numerous comebacks that kept the Liberty within touching distance of a championship-calibre squad for most of the game.

With Breanna Stewart, Sue Bird and Jewell Loyd returning from injuries, Seattle was rusty, but the same could be said for every other WNBA team after a late start to the season. Ionescu was one of seven rookies on this year’s Liberty roster, so pulling a team together to be competitive against a squad packed full of veterans, especially when one of New York’s own, Kia Nurse, went down with an injury mid-game - that requires some sort of leadership.

This is another area Ionescu excels in. You could see her giving the veterans advice and encouraging the young ones to stay positive, even after they nervously bobbled open layups or dribbled off their feet. But this is another area of her game that came as no surprise to Winterburn.

She said: “Sab was really welcoming to all us freshmen. She showed us the ropes on and off the court and was there whenever we needed her. She made expectations clear from day one and held us to a high standard every single day.” 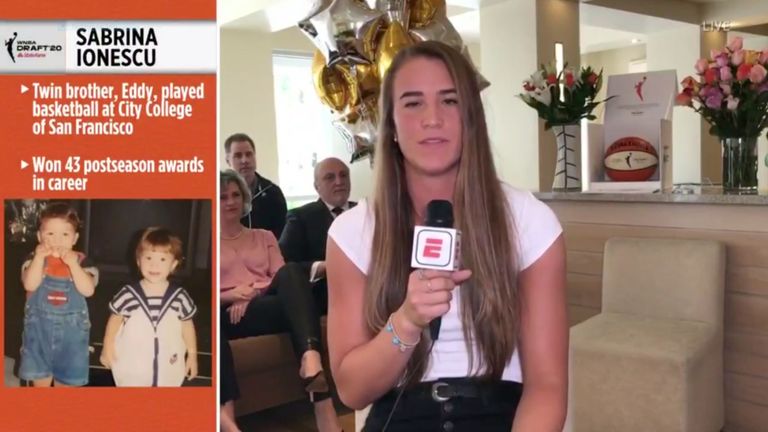 Ionescu’s game in that final year of college looked like a woman among girls. She confidently led the Ducks to a 31-2 record, and in her first WNBA game, the final score of 87-71 was not entirely representative of how competitive her team seemed at times. The gap was closed to just four points late in the third quarter with a Kiah Stokes three, off Ionescu’s assist.

Liberty general manager Jonathan Kolb said: “She’s been on the big stage many times. She knows that [this] result will not be the end game of her career... Sabrina’s going to have a long career in this league and she knows that.”

Ionescu echoed Kolb’s thoughts, and she knows what needs to be done: “I think what can translate to the next level is, hopefully, everything. There will be ups and downs and things that didn’t work as well as they did in college, so I’m going to have to find ways to get better at that level on offense, defense and everything.”

Her next game with the New York Liberty will be against a young Dallas Wings team, when you can expect Ionescu to come in as a confident rebounder, making beautiful passes and leading her team in what they hope will be the Liberty’s first win with her at the helm - hopefully, for a very long time.

The New York Liberty take on the Dallas Wings on Wednesday night at 1am on Sky Sports.