LeBron James: "It's a big-time win for us and I definitely wasn't leaving the floor no matter if I had to put a pirate patch on my eye. I love this team and I love to compete." 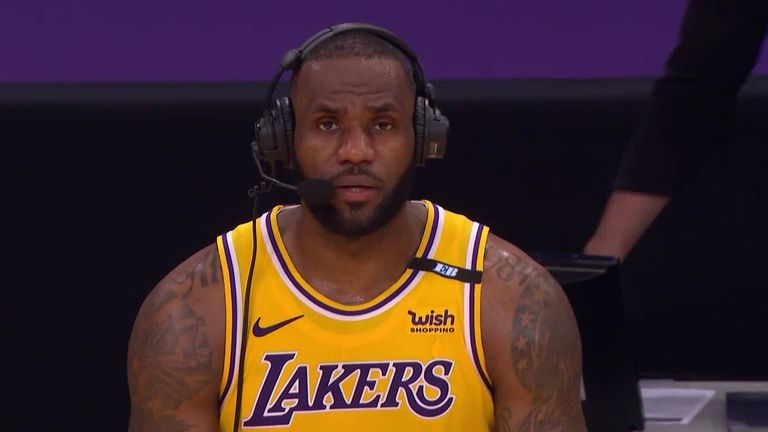 Los Angeles Lakers star LeBron James is looking forward to meeting Phoenix in the first round of the Playoffs after defeating Golden State in the NBA Play-In Tournament.

When in doubt, always aim for the middle target. That was the approach for a squinting LeBron James as he sunk a game-winning downtown triple over Steph Curry as the shot clock expired to inspire the Los Angeles Lakers to victory over the Golden State Warriors and set up a play-off matchup with the Phoenix Suns.

The 17-time All Star had been sidelined a minute earlier after getting a Draymond Green finger to the eye while being fouled during his drive to the rim. Cue the kind of gritty spotlight greatness the Lakers talisman relishes.

With the teams all square at 100-100 with a minute to play, Kentavious Caldwell-Pope was being smothered by Green in the pain, twisting and turning in search of an opening as the seconds ticked down. He located an open James, who warranted the attention of a scampering Curry before winding up and draining the decisive shot.

"After the Draymond finger to my eye I was literally seeing three rims out there so I just shot at the middle one and I was able to knock it down," said James post-game.

"I've been there before and I've been poked in the eye before on a rim collision like that so I just tried to keep my composure, it's going to be pretty sore tonight I know that for sure. But we have a few days until we go to Phoenix.

"It's a big time win for us and I definitely wasn't leaving the floor no matter if I had to put a pirate patch on my eye. I love this team and I love to compete." 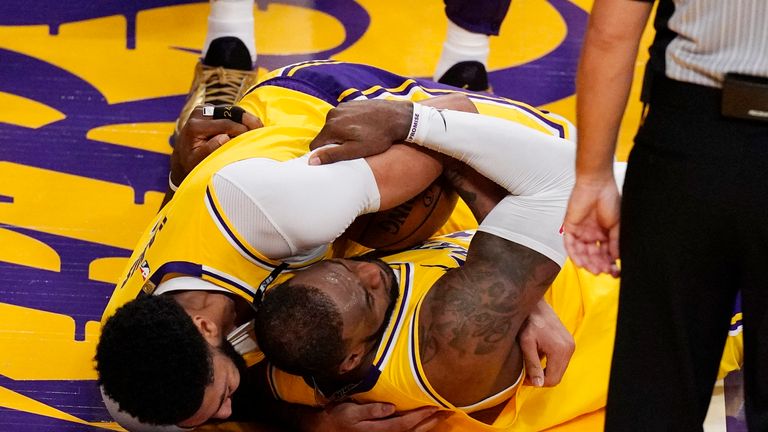 LeBron James scored the game-winning three with less than one minute to go as the Los Angeles Lakers booked their spot in the NBA Playoffs.

The Lakers didn't lead until the fourth quarter after a fine defensive effort from the Warriors to eradicate the obvious size disadvantage, Andrew Wiggins locking down James and Green channelling all his experience to stifle Anthony Davis.

It was their success in nullifying Los Angeles for so long that was perhaps most telling as the Lakers flexed the value of their depth down the stretch to remind that this team goes beyond its two star men.

"I think going into the postseason we were two of the hottest teams, we were in the winner of five and they were the winner of seven or eight of whatever the case may be so both teams played a high level and we knew they were going to come onto our floor and give everything they had," added James.

"They hit us in the mouth in the first half and we just had to respond and we did that on the defensive end and got some great contributions from guys off the bench and we all chipped in for the win."

James closed out the night with 22 points, 11 rebounds and 10 assists, Davis had 25 points and 12 rebounds and Alex Caruso (14), Dennis Schroder (12) and Caldwell-Pope (10) all chipped in with double figures in points. 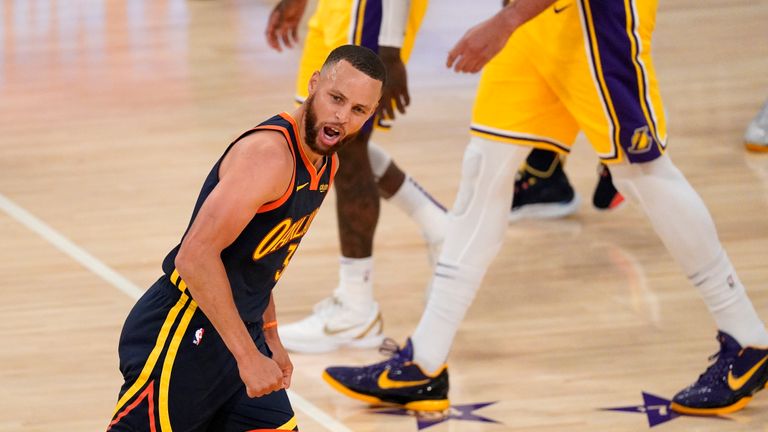 Steph Curry has turned his attention to Golden State's winner-take-all game against Memphis on Friday following an agonising loss versus the Los Angeles Lakers.

As ever Curry led the way for the Warriors, finishing with 37 points alongside his seven rebounds and three assists, while Wiggins provided 21 points, Kevon Looney collected 13 rebounds and Green logged nine rebounds and eight assists.

The Warriors will now meet the Grizzlies on Friday in a 'win or go home' showdown for the eighth seed, following on from Sunday's victory over Memphis in which Curry erupted for 46 points, seven rebounds and nine assists.

"We'll be ready," said Curry. "Right now it sucks, we played pretty well tonight, I've missed this type of environment, it was a lot of fun, high intensity, high competitive level. They made a run in the third quarter and we turned the ball over and changed the game, but we still gave ourselves a chance to win and that's all we were worried about for the last 48 hours.

"Guys are upset, angry we didn't get the job done but we'll be ready for Friday. You have to kind of treat it like the regular season where you have to move on quickly and play a team you've already beaten, you know they're going to come in with the same desperation we're going to have, biggest game of the year." Despite the Warriors' defeat and the reality that they would have typically occupied a playoff spot, head coach Steve Kerr insisted he remains a fan of the play-in tournament.

"It is what it is, we lost so we've gotta play another game and everybody knows what the rules are," he said. "I like it, I thought tonight was really exciting, I thought it was great for the league.

"Even though we were the eighth seed and under normal circumstances we would be in the playoffs as the eighth seed I think this is really good, it's been great for the NBA. As far as we are concerned, we've been in these situations before where you lose a really emotional game and you've got to turn around and play another one, it's just different rules that's all."

The Lakers can meanwhile turn their full attention to the playoffs as they prepare to meet the Suns, who clinched a postseason berth for the first time since 2010.

"They played extremely well all year and deserve to host home-court in the first round and CP (Chris Paul) has played at an MVP calibre all year," continued James.

"Book (Devin Booker), Ayton (Deandre Ayton) has grown all year and they've given a supporting cast around him (Paul). We know what we're going to get out of CP, we know how great CP is, how great Book is, up and coming surge from Ayton, but it's the other guys as well."