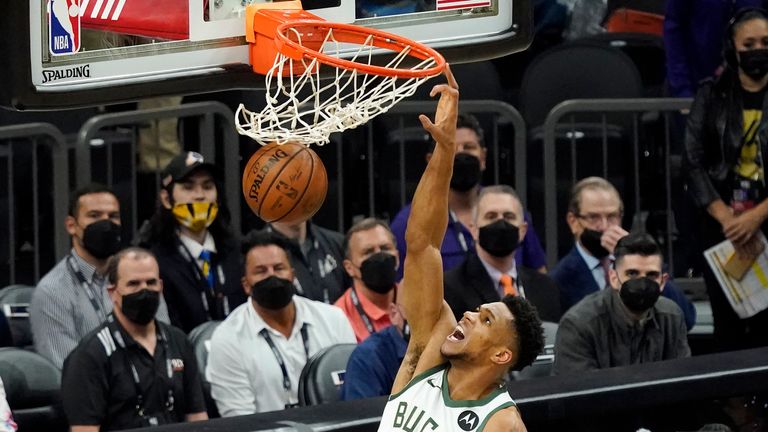 Giannis Antetokounmpo and his sketchy left knee bulldozed through the Phoenix Suns defense for most of Thursday night, once again giving the Milwaukee Bucks more than they could have dreamed in these NBA Finals.

The problem for Milwaukee is he is not getting enough help.

Antetokounmpo finished with 42 points, 12 rebounds and three blocks but could not push the Bucks past the Suns, who took a 2-0 series lead with their 118-108 win. The one-man gutsy show was impressive, but ultimately counted for nothing.

"When he's got it rolling like that and he sees a crowd, we've got to be able to help him out," Bucks forward Khris Middleton said.

Milwaukee's two-time MVP missed the final two games of the Eastern Conference finals with a hyperextended left knee. But Antetokounmpo made a quick recovery and played, to the surprise of many, in Game 1, finishing with 20 points and 17 rebounds.

In Thursday night's Game 2, he was even better.

Antetokounmpo was able to finish with his usual array of athletic moves around the basket. In the third quarter, he nearly single-handedly kept the Bucks in the game, scoring 20 points while aggressively crashing the offensive glass. That was the most points for one player in a quarter in a finals game since 1993, according to Elias.

"I think he wants us to learn on him hard," Bucks coach Mike Budenholzer said. "He wants as much responsibility as we can give him. That's part of what makes him great."

But the box score was pretty ugly for the rest of the Bucks.

Jrue Holiday scored 17 points but needed 21 shots to get there. Middleton was non-existent for much of the night, finishing with 11 points on 5 of 16 shooting. Brook Lopez had a quiet night. Other than Pat Connaughton's 14 points, the Bucks' bench did not contribute much.

"I think we had a lot open shots that we didn't make," Holiday said. "I know me personally there were a couple of layups that I usually make that kind of rimmed in and out. I had some good looks." Milwaukee Bucks' head coach Mike Budenholzer says his side need Giannis Antetokounmpo, Jrue Holiday and Khris Middleton to all contribute after their Game 2 loss to the Phoenix Suns

Budenholzer said he is not down on Holiday and Middleton, even if their first two games have been mostly mediocre.

"You always give credit to the defense," Budenholzer said. "Those guys do a good job. There's probably a few looks that they've got to go in, when you're playing a good defensive team and you get a good clean one. Jrue was getting to the paint a lot. I liked his aggressiveness. I think we need all three of those guys. I think they just keep working, they'll be good."

There were too many moments for Milwaukee like one late in the fourth quarter: Middleton drove to the basket for a layup, only to be denied by Deandre Ayton. Middleton helplessly tumbled to the ground and watched forlornly as the Suns grabbed the ball and sprinted downcourt.

Rest of the Bucks starters: 32 points through three quarters

It became apparent that if Antetokounmpo was not making it happen, it probably was not going to happen for the Bucks.

When Antetokounmpo was on the court, the Bucks outscored the Suns by three. In the eight minutes, he did not play, Milwaukee was outscored by 13.

"Nothing Giannis does surprises me anymore," Bucks guard Pat Connaughton said. "He's got the nickname Freak for a reason. I will say it's incredible what he's been able to do, and it hasn't happened without time he's put in to get himself ready, get his body better and continue to do the things that he does to be a two-time MVP."

While the Bucks were struggling, the Suns' role players were difference-makers.

Phoenix's balance is beating the one-man heroics of Antetokounmpo.

That almost certainly has to change if the Bucks want to make this a series. Game 3 is on Sunday in Milwaukee, live on Sky Sports.

"We're going back to Milwaukee," Antetokounmpo said. "We've been here before. We know what the deal is. We've just got to be aggressive, keep enjoying playing together, keep enjoying playing basketball and hopefully, our good habits throughout the year can take over and we can put ourselves in position to win the game."