"This particular competition was so emotional that I’ve not been able to watch it, even up until this point. There was so much energy that went into the whole four years, particularly into this campaign and knowing it was at home"

In the space of 60 minutes last July, England's Vitality Roses went from having a home Netball World Cup final in their grasp, to facing the reality that a bronze medal was the best that they could achieve.

Heartbreak was not supposed to be the emotion they were feeling on July 20 and having to do what many Roses sides had done before, dusting themselves off for a bronze play-off, wasn't ever part of the plan.

However, a 47-45 loss to the Silver Ferns in the semi-final meant that a determined South African side joined them on court in Liverpool for the penultimate match of the competition.

At the heart of the home side was their captain, Serena Guthrie. A mid-courter who made her international debut as a teenager in 2008 and who had been to two Netball World Cup competitions before.

Guthrie, like all of the very experienced squad, went into the contest with a sole focus - taking the title and securing gold. When that didn't happen, personal emotions had to be managed as well as the teams'.

"The girls were absolutely gutted, so was I," head coach Tracey Neville said.

"We didn't play the performance [in the semi-final] that we'd been doing through the tournament. To turn that around overnight, without a training session and just with some real hard truths between each other, working together and doing video until late and in the early morning, was absolutely phenomenal."

Emotionally the hours Neville described will have been incredibly tough and they came at the end of a prolonged period; a four-year cycle which was entirely geared towards this competition.

With the immense pressure to finish with a medal around their necks, it's no wonder that it's taken captain Guthrie, 10 months to take a first look back at the bronze medal play-off.

"This is the first time that I've watched it," she said during the watchalong on Sky Sports.

"That's because this particular competition was so emotional that I've not been able to watch it, even up until this point.

"There was so much energy that went into the whole four years, particularly into this campaign and knowing it was at home. With myself being captain of a fantastic and incredible team for the first time, at a home World Cup, I just haven't been able to watch all of it."

Day 1. Great vibes. Great people. The Gang is back together #family🌹 ☺️

When you hear Guthrie speak about her own approach to leading in Liverpool, it's no wonder that it's taken her so long to sit down and view some of their campaign.

"It was probably the most intense netball experience that I've had," she said at the time. "But in a really positive way.

"I asked myself quite a few questions going into the tournament in terms of how I was going to try and manage everything and what my approach was going to be. It's fair to say that I wanted to try and stay as true to Serena as I could be and just have a lot of fun along the way.

"It was making sure that I was really comfortable in who I was as a person and that definitely helped me lead through such an intense experience. It was a great; it was a once-in-a-lifetime experience as well."

It's been a true honour. It's not the colour we came for but its the best we could do this time. Well keep pushing. Thanks to everyone whos stepped out with us. For the 🌹 for the future of this beautiful game ❤️

Head coach Neville appointed Guthrie as the team's leader because, in her view, she took their programme forwards and took it to a new level.

"She speaks out and sweats world class," Neville said on squad announcement day.

"She was flabbergasted [when I told her she was captain] and I think that the phone call to her was quite emotional. I got quite teary about it because it probably wasn't something that she was expecting.

"With Serena, she probably underestimates herself more than anybody else. In our eyes she's a world-class player. She's a beautiful person and so valuable as a team member." 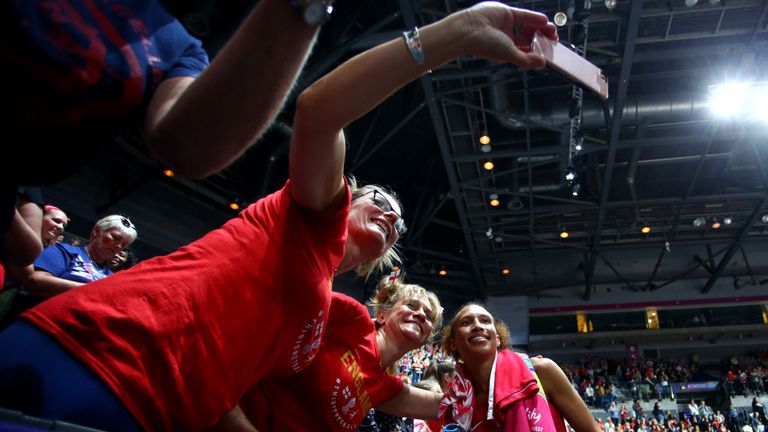 The humility that Guthrie's reaction showed, is the reason that she squirmed slightly when Tamsin Greenway announced her to be 'the best in the world' and a 'game-changer' during the watchalong. It's also means that Guthrie is happier describing others' roles at length, before then commenting on her own.

"Every team needs a physical with presence like Eboni [Usoro-Brown] brings," Guthrie said during the second quarter of the watchalong.

"You know that when she's on court, she's just going to focus on trying to grind and grind. Whilst that's happening I know, as another defensive player, that I can just go for ball.

"She's also not afraid to throw herself about and that puts doubt in the opposition's attackers' minds. That's what you need, you need someone who is going to create extra hassle."

❓ A little trash talking from @SerenaBob on court.... absolutely no chance, there's too much going on!

Guthrie's World Cup, and indeed her 98 caps for England, are filled with game-changing moments. Moments when she wins ball, lifts the crowd and her team-mates, and the team accelerates. The bronze medal play-off in Liverpool was no different and interestingly, she's working off instinct.

"When you go out there, you're just going out there to try and win ball or try and get the ball to the shooters. You never think about those pressure moments and what the team expects of you.

"I have very high expectations of myself and of my team-mates. The way that I play, I play at 100 per cent or 110 per cent and Jo Harten is having to rein me back in because I'm going a bit too hard, that's how I'll always play. I'll leave it all out there.

"My USP is that I try and play the hardest of any player out there and that's what I'll always continue to do. If that makes me a game-changer, then great! It doesn't always work out that way though."

Greenway: No clear answer for Superleague

Tamsin Greenway takes a detailed look at the Vitality Netball Superleague's potential routes forwards and shares more about the intricacies the sport faces.

In October last year, Guthrie announced that she would be stepping away from the court for a year in order to have time to recharge.

After completing such an emotional international cycle, which included suffering from glandular fever for six months in the build-up to Liverpool, time was needed. Guthrie has played elite netball for her club and country since the age of 16.

The world-class mid-courter hasn't announced any concrete plans for a return and from a Superleague and international perspective, the pathway forwards for the sport remains uncertain due to COVID-19.

With the excellent weather in England, Guthrie has become a budding gardener during the lockdown period, but after enjoying one match of the Roses' Netball World Cup campaign, perhaps another couple might be on the cards while she decides her own next steps.