Off The Court: Nat Panagarry shares her experience as an LGBT+ athlete in netball

Loughborough Lightning captain talks to Sky Sports in Pride Month: "I've always felt that I've been celebrated for who I am and that's how everyone should be"

Nat Panagarry, Loughborough Lightning's captain and an England Vitality Rose, joined Off The Court and discussed her experience as an LGBT+ athlete in netball.

The 29-year-old, who has led Loughborough Lightning to two Grand Finals since her arrival at the franchise in 2015, had an unfortunate start to the 2020 season after suffering a foot fracture in the opening round.

With the prospect of a few months on the sidelines, Panagarry set about being as involved as she could and aimed to still play a key role in helping their young players develop and thrive.

Alas, for all involved in the Vitality Netball Superleague, COVID-19 meant that the 2020 season was paused in mid-March and cancelled entirely at the end of May.

At the time, Lightning's captain shared her reaction on social media and echoed the sentiments of many, by saying that she was 'gutted' but that she understood it was the right decision for everyone's health and safety.

As well as getting to a point where she was able to perform her first running session in 14 weeks, Panagarry's lockdown period contained another significant milestone - becoming engaged to her partner Katie.

"I feel like I just got it in the week before, before [COVID-19] all started," she said on Sky Sports' Off The Court.

"We've had time to celebrate together in our little bubble, the celebrations have probably lasted a little bit longer than normal.

"It was a really lovely weekend; I'd been planning for a little while, so I was glad to get it in just before all this."

Every year, the month of June marks Pride Month and across the Vitality Netball Superleague, franchises have used their platforms to share their perspectives about diversity and inclusivity in netball.

As an LGBT+ athlete at the top of the English game, Panagarry's own experiences of inclusivity have been positive ones.

"I've always felt that I've been celebrated for who I am and that's how everyone should be," she said.

"Netball, I think, is one of the most diverse [sports]. I'm always thankful for the netball community, Loughborough Lightning and the Vitality Roses for that." 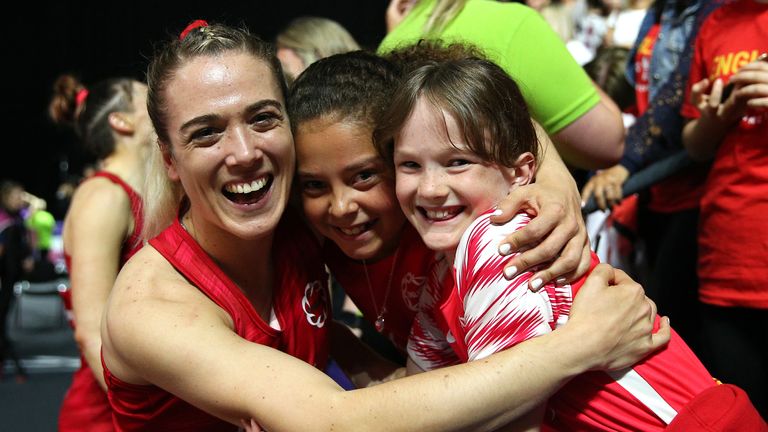 They definitely embraced me, not just the players and the staff, but all of the fans as well. I've never not felt like I could be who I am.

Panagarry's profile was raised significantly as a result of her work at the 2019 Netball World Cup. She was an integral part of an England squad that finished with a bronze medal and it marked a turning point for her personally, as Lightning head coach Sara Bayman noted.

"Seeing Nat over the World Cup, I think that she was a little bit taken aback," Bayman said on Off The Court.

"She went to her first major tournament and it was a home World Cup where the fans went crazy, ticket sales went through the roof and the England girls were getting mobbed!

"It was a realisation for Nat about how many fans netball has, and about how much of an influence she can have.

"It's definitely triggered a change in her, in terms of how she perceives herself. Instead of turn up, train and do your job, she's realised the wider implications of what she's able to impact."

Panagarry echoed her head coach's thoughts and shared that she is incredibly eager to embrace being a role model for others.

"Before the World Cup, I possibly just saw myself as Nat who played netball and that was me," she reflected.

"Since then, it's made me realise that I do need to step up and if I can be a role model for just one person within the community or any minority group, that's amazing.

"I think it's important that I do take that role now and show that this sport is inclusive. We want equality, we want to embrace everyone." 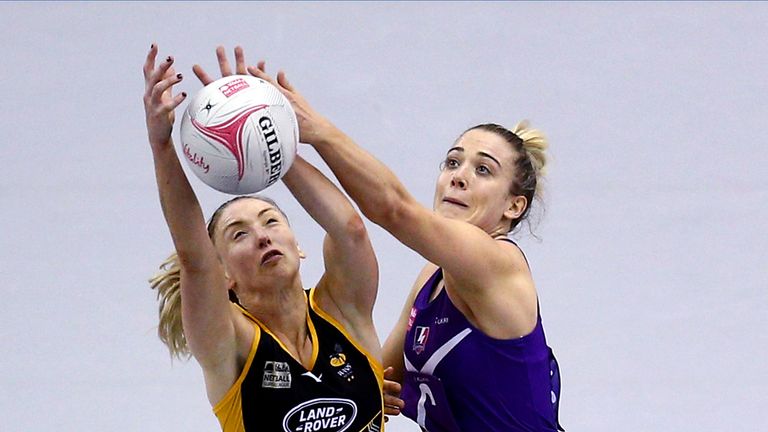 When we’re all on the court, the court doesn’t know anyone’s differences, it just embraces us all.

Bayman, who is now retired from playing elite netball, is slightly older than her captain and on the same episode of Off The Court, she shared her own feelings from her time as an athlete.

"I think that what we are seeing now is a shift and a change in culture generally," she said.

"Tamsin [Greenway] and I are really good friends, but I massively struggled with my sexuality and even telling close friends. I found that really difficult.

"Athletes now, I think generally, are much more willing to embrace who they are and what makes them different. That's where sport has taken a bit of a turn, people's differences are embraced.

"We want to see the personalities, characters and that's what's giving our sport colour.

"There have been trailblazers [in netball] and I think someone like Ash Brazil in Australia has done a great job, Laura Clemesha and Nat in this league.

"We've got other people in our league and it's never not been normal, but I think it's always been quite private. Whereas, now it's becoming much more of a public thing to talk about, and people are proud about it.

"I think that's the turn that we've seen in the last five years or so, and it's really positive to see."