Northern Stars celebrated appearance milestones for Grace Kara and Maia Wilson with a 49-43 result against the Mainland Tactix at the end of Round Two of the ANZ Premiership.

Kara, who has just come back after the birth of her first child, was playing her 150th league match while Silver Ferns' shooter Wilson, celebrated her 50th appearance for the franchise.

Both led by example as the team dusted off memories of a tough 63-39 loss to the Central Pulse the day prior, and looked like fresh and energetic throughout.

All the signs pointed towards this being a close match with seven of the last nine meetings between the sides having been decided by five goals or fewer, however, the concern for the Stars was their limited recovery time.

From the first whistle, and a quick route to goal, it was clear Kiri Wills' team were glad to be back out on court and eager to show their true colours.

Wills had opted to keep their starting seven the same for this second match of the round and that worked well. Jamie Hume stepped up at GA and proved to be much more of a presence in attack while goal defence, Kate Burley asserted herself at the other end.

Wilson and Hume had their hands full with the dynamic Jane Watson and Temalisi Fakahokotau though. Tactix's circle defenders were as tenacious as ever but in attack the side were not as comfortable.

They often went direct, with Te Paea Selby-Rickit seeking out Ellie Bird, but did not look so comfortable when that option was not on and the Stars' all-court defence picked up key turnovers.

After a single goal had separated the two teams at the first pause, the Stars pressed at the end of the second quarter and produced a seven-goal half-time lead [26-19].

The third quarter is known as the 'Championship quarter' for a reason and even with 12-minute quarters, it had already been influential in deciding results in Round Two.

The Tactix opened with a statement of intent, finding goal instantly with a sumptuous ball directly into the circle off the centre pass, but were still being pressured. The Stars continued to convert their own centre passes with Wilson underlining her international credentials.

As the Tactix's captain Watson said after, they felt like they did not treasure the ball enough throughout and despite head coach Marianne Delaney-Hoshek shuffling her line-up in the last quarter, they could not claw it back.

For the Stars, the encounter marked an important turnaround after such a tough return to court on Saturday. After a double-header of matches, they now have until Sunday to recover before facing the Southern Steel.

The Tactix will be the first onto court in Round Three and will face-off against the Magic on Friday night. 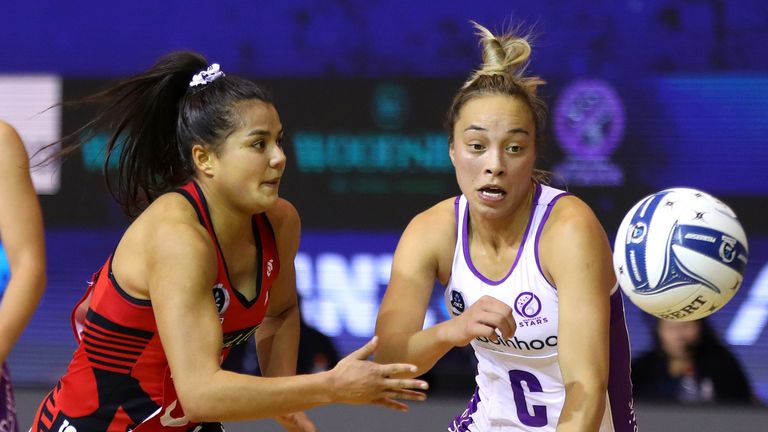 We did get a bit of a boot up the bottom, after yesterday! We just stayed connected right from the start and wanted to work on those basics.

Round Three commences on Friday with the Tactix taking on the Magic at 8am, live on Sky Sports. It will be the turn of the Southern Steel and the Northern Mystics to each play two matches in one round.

The Steel will meet the Mystics on Saturday and the Stars on Sunday before the round finishes with the Central Pulse taking on the Mystics on Monday. All matches will be live on Sky Sports.