Anna Stembridge talks about how Team Bath Netball dealt with the feeling of unfinished business after the cancelled Superleague season, and how the franchise are preparing for a "tough" 2021.

In December last year, Stembridge spoke to Sky Sports about her excitement at the fact that she'd been able to retain 10 of the 13 players available to her.

With pre-season in full flow, she stated that Team Bath Netball were in a strong position and that they were ready to really attack the forthcoming season.

Fast-forward to the Season Opener in February this year, and the franchise commenced their campaign with a 72-58 victory over old foes Loughborough Lightning.

A 71-52 result against Celtic Dragons followed in Round Two and after that, they made another statement by beating the two-time champions Wasps Netball in Round Three.

"There definitely was a feeling of what could have been..." Stembridge said to Sky Sports as she reflected on the three matches they played before the season was cancelled due to COVID-19.

"We felt like we had hit the ground running; we were sharp and we'd put some really good performances out. Then, it all stopped.

"The performances had built throughout pre-season and people were really standing up in different areas of the court and showing different aspects [to their games].

"We wanted more but ultimately the health and safety of everyone was [and is] the most important thing."

When a season is left hanging, without any way of it being completed, it can leave residual marks on players and impact them moving forwards.

Stembridge, who has a Masters degree in Sport Psychology, realised this and set about ensuring that everyone was able to put a full stop after Team Bath Netball's 2020 campaign.

"We did an end of season evening, virtually. That was brilliant because I think it actually gave us a bit of closure on it," she said.

"That's the hard thing, when you're told that it's null and avoid, you don't really know what to do or how to think.

💙💛 Shattered that our session has ended but it's completely understandable. Health and safety is priority above all else!! However I'm still incredibly proud to have lead these legendary chicks! We're 100% babes! Winners in my eyes!! #3from3 #TeamBath #Sisters

Not only did Stembridge and her players enjoy their virtual end of season evening, but they also evaluated the 'season' as they would have done had it stretched over a number of months.

This evaluation included full review documents and Stembridge believes the process was vital to ensure that the positives could be identified and built on.

"The group were a really happy group last year and in their one-to-ones and their review documents, they spoke a lot about the off-court relationships, their confidence and the connections.

"That's something that I definitely wanted to try and replicate [moving forwards], whether that's the off-court team building activities they did or the honest conversations that they'd had. 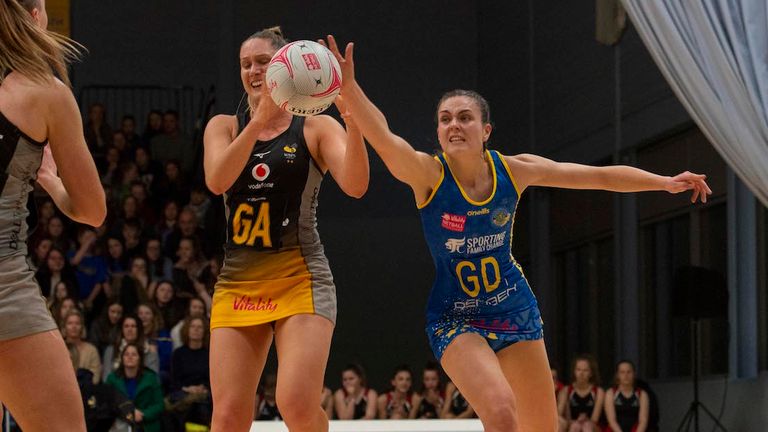 We've got a lot of stuff that we want to build on, rather than seeing it just as a three-game season that we're not going to get anything from. We absolutely have learnt a lot from it.

As has been the case in many sports, and in women's sport in particular, the impact of COVID-19 has been acutely felt by Vitality Netball Superleague franchises.

From Saracens Mavericks having to set up a GoFundMe page to try and raise vital funds, to requests for season ticket holders to donate their balances to the franchises, financial situations are precarious.

"It's been tough, in all honesty. We're obviously housed at the university and are very lucky to have them as one of our major sponsors but we're all feeling the toll of COVID," Stembridge said.

"What I've seen behind the scenes, is just how much work has gone into working with our partners and our key sponsors. We're very lucky that those partners and sponsors are looking at how they can still be part of our journey and still work with us.

"The fans have got behind us [too] and it's been so heartfelt; they've donated their season ticket refunds to us. It's humbling that even in these tough times people are being so generous.

England Netball has confirmed the 2021 Vitality Superleague season will return in February 2021 as the signing window for teams officially opens.

"We all know that next year is going to be tough and that financially the club is going to be really stretched. So, we're going to have to be creative in the way that we work and utilise different resources.

"First and foremost, it's about making sure that we retain and build the team to ensure that we've got everything in place to really go hard during next year's campaign."

England Netball has now confirmed the 2021 Vitality Superleague season will return in February next year, and with the signing window opened, it marks a busy time for Stembridge and the other head coaches.

All ten teams from last season, plus new entrants Leeds Rhinos Netball, have until October 30 to lock in their line-ups for next year.

With the manner in which Bath attacked their 2020 campaign, and the return of Serena Guthrie to netball, you would expect that retention would be the order of the day.

Stembridge does have an eye for a signing though too, as the introduction of Kim Commane showed, and with the franchise having dealt with the short season properly, you expect that Team Bath Netball to pick up where they left off and be title contenders in 2021.

Live netball returns to Sky Sports with the Vitality Roses taking on the Silver Ferns in a three-Test series at the end of October. Join us for the first Test on October 28.