Kat Ratnapala's outfit disrupted Bath from the first centre pass and replicated the form they showed against Wasps; Mavericks are one of four teams vying for the one remaining play-off place and victory moves them into sixth position with two matches remaining

Saracens Mavericks produced another outstanding performance to back up their win over Wasps and beat Team Bath Netball for a second time this season.

Kat Ratnapala's outfit, who went into the Round 19 contest having been the only side to have beaten Bath previously, started extremely quickly and didn't let up.

Their 46-35 victory potentially came at a cost though, as Beth Ecuyer-Dale and Razia Quashie both left the court injured during the latter stages of the fourth quarter.

Aside from their injury concerns, Mavericks' win adds greatly to their hopes of making the one remaining play-off place their own.

Wow. Just wow. This season 🤯 did not think that would happen....
Credit where it's due, well done Mavericks that's finals performance worthy 👏🏼
As for Bath... BIG questions now heading into top 4 bearing in mind who they might end up facing! @SkyNetball

The positive for Ratnapala and her squad is that they are the ones with the opportunity to secure the greatest number of points by the end of Round 20 and the regular season.

Earlier on Sunday, Sirens also did all that they could to press forwards and take fourth, by beating Dragons 53-34. Meanwhile, Wasps' Round 19 contest against Surrey Storm was postponed due to a positive COVID-19 test within Wasps' squad.

It was also announced on Sunday that Rhinos' players and staff are having to isolate after a positive COVID-19 result in their ranks. They weren't scheduled to play a fixture during Round 19, due to it being one of their bye weekends, and the Vitality Netball Superleague will update on both situations in due course.

This season, Saracens Mavericks' consistency has been their Achilles heel and yet on Sunday afternoon, they were able to reach the heights that they needed to, for a second round in succession.

"It meant a lot to us," Ratnapala said, after their 11-goal victory over Bath.

"The players put their hearts and souls out on court today. We can all talk about a disrupted season, and that's what it's been for us, but I'm just really proud of the connections out there on court today. It was great."

From the start, as Ratnapala highlighted, Mavericks clicked in both attack and defence. Jodie Gibson and Quashie were consistently a step ahead of Sophie Drakeford-Lewis and Kim Borger, while Ine-Marie Venter and Kadeen Corbin worked within their own goal third and shooting circle superbly.

A 12-5 first quarter set the tone, and it forced the first of Bath's personnel changes. Anna Stembridge introduced Betsy Creak at shooter and moved Borger out to GA.

The unit looked more comfortable, however Gibson elevated her level further in the second quarter and showed why she was a key part of England's 2018 Commonwealth Games gold medal-winning squad.

From their position of power at half-time, with a 10-goal lead, Mavericks pressed for much of the third quarter and frustrated Bath.

Serena Guthrie, Layla Guscoth and Eboni Usoro-Brown did as much as they could in defence, but their work wasn't rewarded at the other end. Drakeford-Lewis had arrived at WA, but even her speed couldn't generate the magic ingredient Bath needed.

The second half was tighter on the scoreboard, but as the clock ticked down, Mavericks' belief grew and grew.

They hit 40 goals with just over five minutes left, as they maintained their tempo and converted their centre passes to goal. Passes that hadn't stuck in previous matches, found their recipients, and errors just weren't present in their work.

In all, the only downside to Mavericks' 48 minutes on court at the Copper Box Arena, were the injuries to Quashie and Ecuyer-Dale, which will need to be assessed. 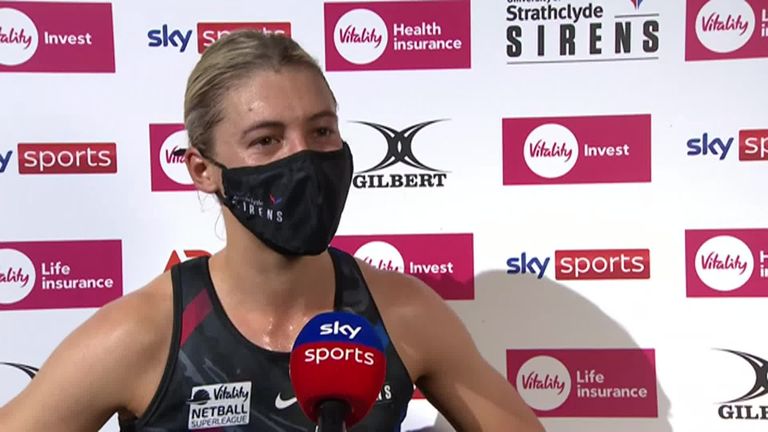 In the first match of the day, Strathclyde Sirens looked comfortable as they dismissed Celtic Dragons without a second look to record a 53-34 victory.

Karen Atkinson's outfit, who continue to have their most profitable season yet, were clinical and largely untroubled by their opponents. The result takes them into fourth, with 32 points, and one game remaining against Manchester Thunder in Round 20.

Prior to the match, Atkinson had told Sky Sports that this contest was their 'semi-final' and she implored her starting seven to play with composure. From the first few minutes, it was clear that the excellent Gia Abernethy and her colleagues were going to follow their technical director's words to the letter.

Towera Vinkhumbo and Emily Nicholl picked off a wealth of ball and throughout, Abernethy and Beth Dix fed their shooters beautifully. Emma Barrie provided the focal point for the first half, before Bethan Goodwin introduced a new dimension later in the game.

Sirens always looked comfortable and Dragons just didn't have the weapons to trouble them.

Tania Hoffman's outfit will have one more chance to secure a second victory of the season when they take on Rhinos in Round 20, while Sirens have their meeting with Thunder to look forward to.

It went right to the wire but @Pulse_Netball clinched the win over @SevernStars.

A huge shout out to all the fans in the crowd and watching at home 👏 #RiseAsOne pic.twitter.com/ZIt0WcJcy8

In the final game of the day, London Pulse, who take on Mavericks on Monday night, narrowly beat Severn Stars 42-40.

After going goal-for-goal throughout, Ellie Ratu gained a key interception in the centre third with three minutes to go.

Despite huge pressure from Stars, Sigi Burger converted Ratu's turnover to goal, and Pulse's next centre pass too. Then, with a packed house at the Copper Box roaring the home side on, Pulse held firm on their final centre passes to cross the line first.

"Our defence is always really strong, but I thought that the players were really controlled in attack today too," Sam Bird, London Pulse's CEO and director of netball said. "It was a great battle and contest, and it's good to come out on the right side of it too."