England were 38-32 down going into the final 15 minutes, with Helen Housby securing the final goal in the dying seconds; the two teams will meet again on Wednesday evening in the final of the Netball Quad Series at 7.30pm; coverage will be live on Sky Sports Arena and streamed on YouTube 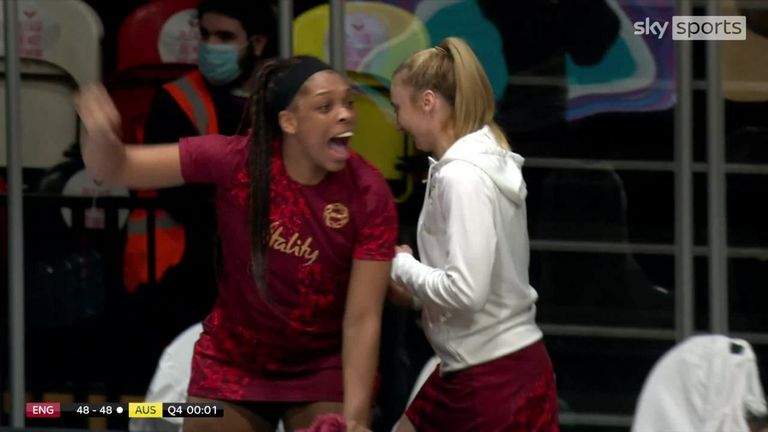 England Vitality Roses clinched a thrilling 48-48 draw against the Australian Diamonds in the penultimate match of the Netball Quad Series.

After trailing by six going into the last quarter, and being three down with three minutes to play, Jess Thirlby's outfit showed exceptional resilience and composure not to panic.

Instead, they calmly converted a footwork call through to goal in the final seconds, with Helen Housby securing the match-saving shot from distance.

The two teams will now meet again on Wednesday evening in the final of the Netball Quad Series, with one taking away the title.

"I think that it sets up tomorrow perfectly," Thirlby said to Sky Sports directly after the full-time whistle. "What was really pleasing was to be able to get people out there in certain combinations, whilst still with the intent to try and win.

"In the first half we were a bit sloppy and got schooled too many times in patches, but we never let them pull too far ahead. This group, they're refusing to lose at the moment, which is a great psychological edge."

Despite having two matches against each other in the space of two days, Thirlby made it clear pre-match that she would not be holding back tactically and said, if anything, she'd "do the opposite".

The head coach, like her Australian counterpart, had both chosen to make changes to their match-day squads and starting line-ups.

For England, Clarke started at Centre, Guthrie dropped to wing defence, Eleanor Cardwell took over from George Fisher at shooter and Eboni Usoro-Brown was handed the goal keeper bib.

Stacey Marinkovich amended her shooting circle, as well as introducing Jamie-Lee Price at Centre and Sarah Klau in at goal keeper.

Both head coaches would continue to amend their line-ups throughout the contest.

The first goal took a couple of minutes to arrive and when it did, it was a result of English pressure. Serena Guthrie provided the early turnovers, and the Roses went 3-0 up before being reeled in.

As the quarter continued to two sides went goal-for-goal before England tailed off in the final stages and the combination of Jo Weston and Sarah Klau got the better of their attack end.

At 12-9 down, Thirlby shuffled England's cards while Australia shifted just one. Guthrie moved up into Centre and Beth Cobden arrived at wing defence, with Cardwell and Housby switching bibs.

The second quarter was messy from the Roses. Early on, the contact calls increased against Eboni Usoro-Brown and throughout unforced errors plagued their work.

Without Fisher on the bench, Thirlby didn't have another option when the switch of her shooters didn't initially settle. Laura Malcolm's arrival at WA didn't fully calm proceedings either.

The Diamonds continued to plug away at their tally and didn't have to excel to win the quarter, as England beat themselves.

Half-time brought further changes as the Roses tried to unlock their opponents and handed Geva Mentor her 151st international cap.

Mentor's presence at the back really increased the pressure on the Diamonds. At the other end, despite moments of precision, it continued to be hard work for the Roses moving forwards.

England remained behind on the board as the match continued, but another personnel shuffle started to shift the dial.

Sophie Drakeford-Lewis' speed in the wing attack position gave Australia something fresh to think about and Malcom looked more comfortable back at Centre.

The Roses had the perfect start to the final quarter, instantly heaping the pressure on the world leaders and cementing the belief within themselves, and the home fans, that the game was far from over.

They then used the final three minutes to claw back the same number of goals, with Housby - the Queen of a buzzer-beating shot - calmly putting up their final goal with five seconds remaining to secure a hard-earned draw. 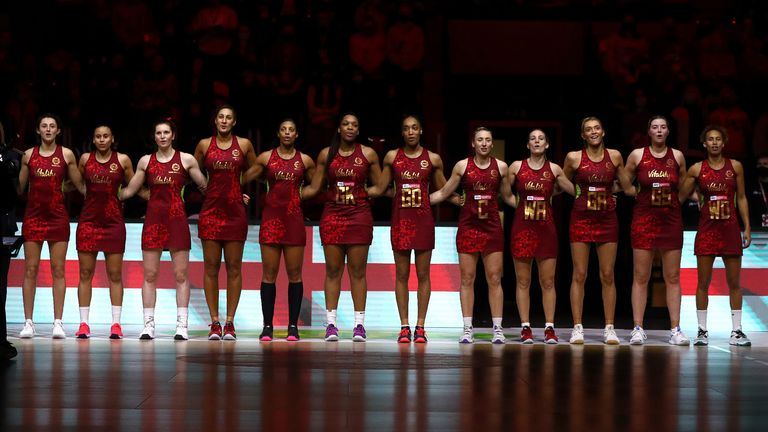 This feels like a win for England, and it feels like a loss for Australia, because of the situation they were in at three-quarter time. England will take more momentum into the final than Australia will off the back of a draw.

In the opening match on Tuesday night, New Zealand capitalised on errors from South Africa to deliver a 54-43 result and secure their first win of the series.

Despite the 11-goal victory, the Silver Ferns' head coach Dame Noeline Taurua said that she "wasn't too sure" about her side's performance.

"I thought that defensively we turned over some good ball but what I'm disappointed about is our basic skills," she noted. "We need to be better and even though we won, we should have won by more."

Like England and Australia, New Zealand and South Africa have one final meeting on Wednesday evening. The two teams will contest the third and fourth-place play-off, before the Roses and Diamonds take to court at the Copper Box Arena.

Watch every match of the Netball Quad Series live on Sky Sports and streamed on the Sky Sports YouTube channel. England's meeting Australia is live from 7.15pm on Sky Sports Arena; New Zealand versus South Africa will be live from 5.15pm.