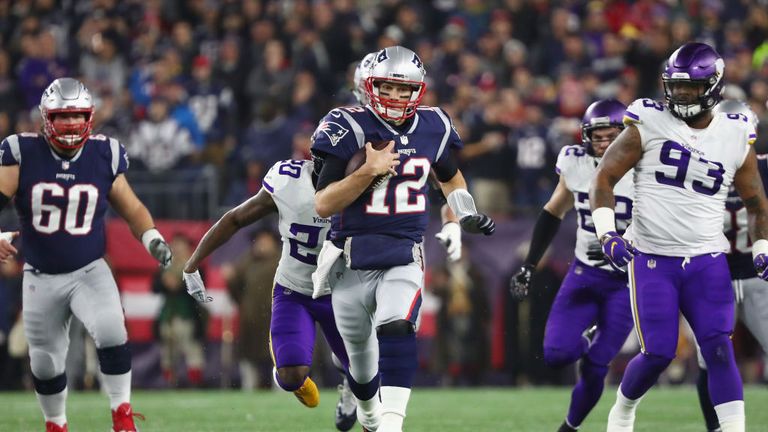 Tom Brady threw for 311 yards and a touchdown to Josh Gordon to give the New England Patriots a lead they wouldn't relinquish as they beat the Minnesota Vikings 24-10 on Sunday.

Brady now has 579 touchdown passes, including the playoffs, tying him with Peyton Manning for the most all time. He also has 508 regular-season TD passes, which ties him with Brett Favre on the career list. Manning is first with 539, while Drew Brees has 518.

With the game tied at 10 apiece in the third quarter, Brady - who completed 24 of his 32 passes - found Gordon over the middle for a 24-yard scoring strike to move see the Patriots regain the lead at 17-10.

Cousins completed 32 of his 44 passes, but for only 201 yards as the Patriots defense stifled the Vikings. Cousins' one scoring strike was to Adam Thielen late in the first half.

Before that, New England had opened up a 10-0 lead, with Develin plunging over from the one-yard line to cap an 81-yard, eight-play touchdown drive on their opening possession.

A further 15-play drive by the Patriots in the second quarter resulted in just three points as the Vikings made a goal-line stand, leaving Stephen Gostkowski to kick a 20-yard field goal.

A field goal for Vikings kicker Dan Bailey brought the teams back level early in the their quarter, but the Patriots swiftly moved back ahead with Brady and Gordon's connection and the home side eased to a comfortable victory thereafter.

New England quarterback Brady also reached another career milestone on the night: 1,000 yards rushing in his career. Never considered much of a mobile QB, it has taken Brady 19 years and 265 games to reach the mark - the most by a player since the 1970 merger.