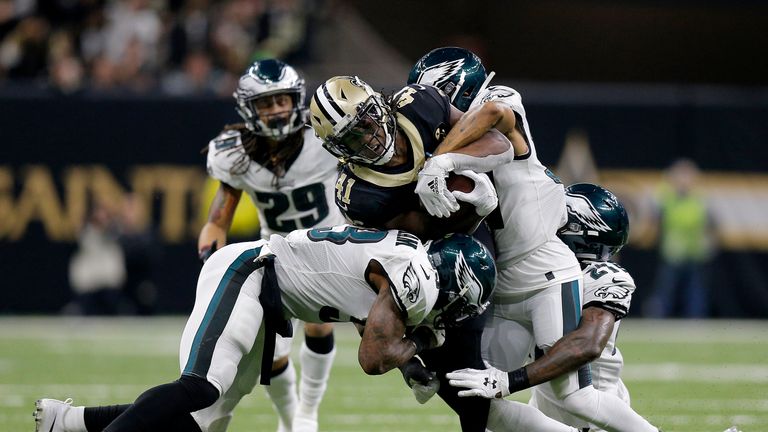 The New Orleans Saints overcame a 14-point first-quarter deficit as Drew Brees threw for 301 yards and two touchdowns to help lift the hosts to a 20-14 win over the defending Super Bowl champion Philadelphia Eagles on Sunday night.

Saints cornerback Marshon Lattimore intercepted a Nick Foles pass - which went through the hands of Alshon Jeffery - with just under two minutes remaining, and running back Alvin Kamara ran for 12 yards on third-and-10 to kill the clock.

The No 1-seeded Saints trailed 14-0 just 10 minutes into the game but scored 20 unanswered points to advance to the NFC Championship Game next Sunday afternoon against the Los Angeles Rams at the Superdome. 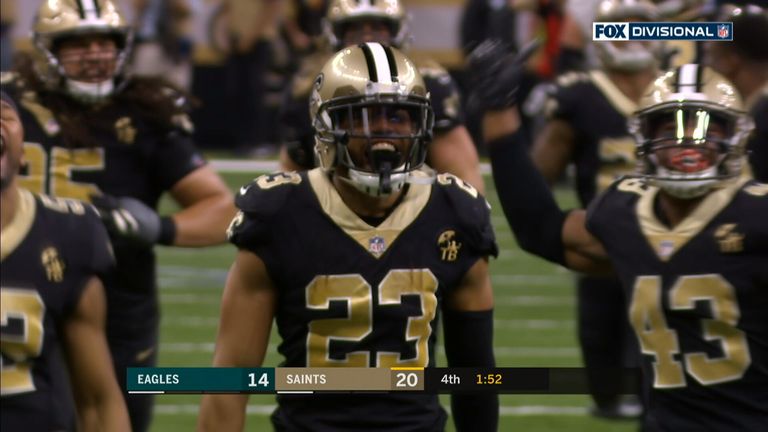 After starting 0 for 3, including an interception on the first play of the game, Brees finished 28 of 38, with scoring passes of two yards each to Keith Kirkwood and Michael Thomas. Thomas set a Saints playoff record with 12 catches for 171 yards.

Foles completed 18 of 31 passes for 201 yards, but Philadelphia's offense failed over the final three quarters, amassing just 97 total yards after having 153 in the first.

Foles completed eight of his first nine passes for 113 yards and led the Eagles to touchdowns on their first two possessions. The first score was set up on the Saints' first play, when Brees badly underthrew Ted Ginn on a deep route, and Cre'Von LeBlanc intercepted the ball at the Philadelphia 24-yard line.

Foles completed all five passes for 65 yards on the 76-yard scoring drive, including a 37-yard scoring strike to wide receiver Jordan Matthews. After New Orleans went three-and-out, Foles then directed a 10-play, 75-yard touchdown march, leaping in for a one-yard score.

But the Saints finally got on the scoreboard in the second quarter. Head coach Sean Payton successfully gambled twice on fourth down, converting a fourth-and-1 on a fake punt and then scoring a touchdown on fourth-and-goal from the two-yard line as Breed found undrafted rookie Keith Kirkwood. New Orleans took its first lead of the game, 17-14, by capitalizing on an epic 18-play, 92-yard drive that consumed more than 11 minutes of the third quarter and netted the Saints nine first downs.

Wil Lutz extended the Saints' lead to 20-14 with a 39-yard field goal with 10 minutes left of the fourth quarter, but it was still a one-possession game.

When Lutz missed a 52-yard field-goal attempt wide right with three minutes remaining, the Eagles had new life at their own 42-yard line, but Jeffery's drop of Foles' pass and Lattimore's interception - his second of the game - sealed Philadelphia's fate.