Good Morning Football's Peter Schrager: "Lamar is putting on a show week to week, and he continues to dispel all of the myths that he can't play quarterback"; Watch Jackson and the Baltimore Ravens host the Los Angeles Chargers, live on Sky Sports NFL on Sunday from 6pm

Lamar Jackson is coming off the back of his best-ever game in his already impressive NFL career, with the Baltimore Ravens quarterback throwing for 442 yards and four touchdowns, as well as rushing for 62, in a comeback win over the Indianapolis Colts on Monday night.

His head coach, John Harbaugh, said after the game: "It was one of the greatest performances I've ever seen", while Colts owner Jim Irsay wrote on Twitter that Jackson's efforts in overcoming the Colts' 19-point lead late in the third quarter "may have been the single greatest performance in NFL's 100 yr. history."

Jackson has a career 34-8 record as a starter since being drafted with the 32nd pick of the 2018 NFL Draft and was named league MVP in 2019, but a frequently used critique of the QB has been that he relies too much on his legs to bail his team out of trouble and can't win the big games based purely on arm talent. 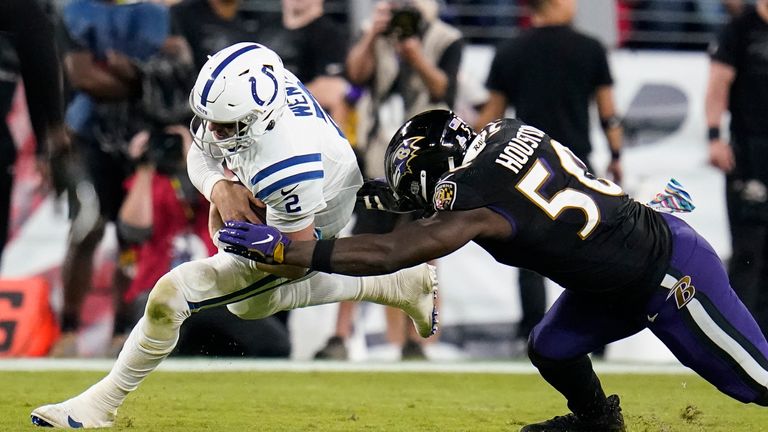 Monday night's overtime win, in which Jackson completed a staggering 86% of his passes - a new NFL record for a quarterback who has thrown for 400+ yards - has gone some way to dispelling that myth, but former NFL defensive back DeAngelo Hall believes Jackson is only 'scratching the surface' of his talent.

"I've actually been someone who has been saying Lamar needed to take that next step. Yes, he won an MVP, but he did that with limited throwing, so the potential is off the charts with what this guy could be once he sits in the pocket, sees some more defenses.

"What you saw the other night, that's the end result of what Lamar is capable of being.

"I actually don't think he's the finished product, even though it was an amazing game. I'm telling you that he is just scratching the surface.

"He can always run around, but teams now have to guard him a little bit differently because he can get out of the pocket and make tremendous plays. Jackson is one of a number of exciting young quarterbacks taking the NFL by storm right now, along with Patrick Mahomes of the Kansas City Chiefs, Josh Allen of the Buffalo Bills, Justin Herbert of the Los Angeles Chargers - the Ravens' next opponents this Sunday - to name a few.

But GMFB presenter Peter Schrager backed up Hall's point, adding: "In a week where Allen was unbelievable, Herbert too, Tom Brady was flawless, I think Lamar had the best game played by a quarterback all season!

"You take a look at the NFL's passing leaders through the first five weeks, Lamar is right in the thick of it - fifth, 1,519 yards. And look at the league's rushing leaders, he's right there - eighth, 341 yards.

"Even looking at the total offensive performances of some teams, Lamar on his own is better! His 1,860 yards slides him in at 15th, between the Philadelphia Eagles and San Francisco 49ers.

"Lamar is putting on a show week to week, and he continues to dispel all of the myths that he can't play quarterback."