San Francisco beat Green Bay 37-20 in the NFC Championship game two years ago; Aaron Rodgers has 0-3 record vs the 49ers in the playoffs; watch the divisional round clash between the 49ers and Packers, live on Sky Sports NFL from 1.15am on Sunday morning

The San Francisco 49ers jump from one historic playoff rivalry game to another this week as, following their thrilling Wild Card win over the Dallas Cowboys on Sunday, they next travel to the Green Bay Packers in the divisional round on Saturday night.

In the 1990s, for the 49ers, it was very much a case of, 'if Dallas doesn't get you, Green Bay will'. Between the 1992 and 1997 seasons, San Francisco lost three NFC Championship games - two to Dallas and one to Green Bay - as well as two divisional round clashes with the Packers. The only instance in which they avoided defeat to either, was when they beat the Cowboys on their way to Super Bowl success in the 1994 season.

Since that mid-90s spell, San Francisco have fared much better against the Packers, owning a 3-0 record in the playoffs against current quarterback Aaron Rodgers in fact - with the most recent of those victories coming just two years ago as the 49ers ran all over Green Bay in an NFC Championship drubbing. Here we take a look back at some of those previous playoff encounters, as well as some of the most recent meetings between the two, to see if they might have any bearing on who will have the upper hand in a frigid Lambeau Field on Saturday night...

Favre has his way with the Niners in the 90s

The NFC was undoubtedly the dominant conference in the NFL in the 1990s, and the 1980s too for that matter. Across the two decades, the NFC accounted for 14 of the eventual Super Bowl winners, including a run of 13 straight from the 1984 season to the 1996 season. And at the back-end of that run, it really came down to one of two teams as to who would be lifting the Vince Lombardi Trophy aloft - the Cowboys or the 49ers. 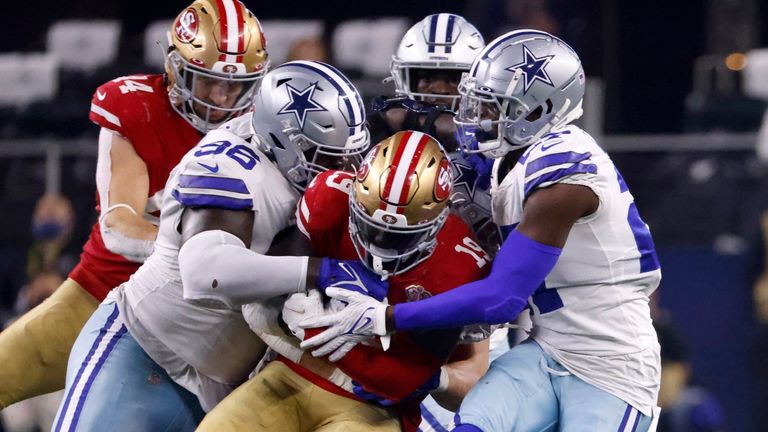 The two teams met in three successive NFC Conference Championships, games that many considered to be the true Super Bowl, such was the expectation the victor would go on to beat the AFC representative a week or two later. Dallas won the first two (and Super Bowls XXVII and XXVIII), San Francisco the third (and Super Bowl XXIX).

As such, when the defending champs hosted the Packers in the divisional round of the playoffs a year later, they were installed as 10-point favourites for the game, expected to book yet another Conference title tilt with the Cowboys (who did hold their end of the bargain by reaching the final four for a fourth year in a row).

But no, the 49ers were undone 27-17 by a Packers team led by Brett Favre, fresh from winning his first of three consecutive league MVP awards. Favre threw for 299 yards passing and two touchdowns as Green Bay built a 21-0 lead, while San Francisco's quarterback Steve Young tossed up two interceptions when attempting a staggering 65 throws.

A year later, Green Bay did it again - this time in Lambeau Field - with the Packers once more streaking into a 21-0 first-half lead on their way to a convincing 35-14 victory. Later that month, they would win the Super Bowl for the first time in 29 years.

The misery wouldn't stop there for the 49ers as the two teams met for a third year running, this time in the NFC Championship game at Candlestick Park where Green Bay would be victorious 24-10. Finally, it was fourth time lucky for the 49ers as they prevailed when the 1998 season scheduled a Wild Card clash between the two teams - San Francisco winning 30-27 courtesy of 'The Catch II', as Terrell Owens caught a stunning, game-winning 25-yard touchdown with only eight seconds to go.

Rodgers has had a somewhat strained relationship with the 49ers ever since San Francisco passed on the California native, and boyhood 49ers fan, in the 2005 NFL Draft, instead opting to select Alex Smith with the No 1 overall pick.

As a result, Rodgers slid all the way to the No 24 pick in that draft class before finally being taken by Green Bay - where he'd have to wait a further three years to become their starter as Favre took his time handing over the reins.

Rodgers has been a revelation since, with many arguing he is the most talented quarterback to ever play the game. But talent is one thing, winning is another, and ultimately Rodgers' one Super Bowl title to show for his 14 seasons lighting up the NFL as a starter isn't enough - especially when you compare it to the seven rings spaced across Tom Brady's two hands.

Rodgers has taken the Packers to the playoffs 10 times previously; the 49ers have accounted for a third of his nine postseason defeats - in back-to-back years to end the 2012 and '13 seasons and then a crushing 37-20 drubbing in the NFC Championship game two years ago.

In the first instance, a fresh-faced Colin Kaepernick - appearing in his first career playoff game - overcame tossing an early pick-six interception to throw for 263 yards and two touchdowns, as well as rush for a staggering 181 yards and two scores to set a new NFL rushing record for a QB. San Francisco ultimately racked up 579 total yards in a 45-31 divisional round win en route to the Super Bowl.

A year later, Kaepernick did it again, leading San Francisco to a first and only playoff win at Lambeau Field as, in one of the coldest games in NFL playoff history (-15°C), the 49ers QB drove the team down the field in the final five minutes to set up a 33-yard field goal by Phil Dawson as time expired, clinching a 23-20 Wild Card win.

Two years ago, Rodgers - who had hardly put a foot wrong in either of those first two playoff defeats - was to face his 49er foes yet again, this time in the NFC Championship game.

The San Francisco defense had dominated him in their regular-season meeting, holding him to just 104 total yards on 33 pass attempts in a 37-8 thrashing in Week 12. Two months later, it was the 49ers offense that did the damage - and, more specifically, their run game - as they steamrolled Green Bay to the tune of 285 rushing yards in another handy 37-20 win, with Raheem Mostert accounting for 220 of those yards and finding the endzone four times!

Rodgers has exacted a modicum of revenge since that fateful night, however. The two teams have met twice more in the last two regular seasons, both clashes resulting in wins for the Packers.

In Week Nine of the 2020 season, Rodgers and co romped to a 34-17 road win over a massively under-manned San Francisco side decimated by injuries and missing a further four key players due to receiver Kendrick Bourne testing positive for Covid-19 and three others being deemed close contacts.

This season's meeting was a far fairer gauge of the standing of both squads and, given that it played out to be a 30-28 thriller pinched by Green Bay on the very final play of the game, then Saturday's matchup surely sets up to be a corker. Rodgers - who was majestic throughout, completing 23 of 33 throws for 261 yards and two touchdowns - helped the Packers race out into a 17-0 lead late in the first half. But back came San Francisco, and the home side actually edged ahead by one point with only 37 seconds left in the game as Jimmy Garoppolo found Kyle Juszczyk for a 12-yard touchdown.

But, for someone of the supreme talent and skill of Rodgers, that was more than enough time as, even with zero timeouts left, he found favourite target Davante Adams - who had 132 yards receiving and a TD on the night - for two big completions to move Green Bay into field goal range, where Mason Crosby did the rest from 51 yards as time expired.

Green Bay, as the No 1 seed in the NFC, have the added bonus of home-field advantage (and an extra week's rest) as these two great rivals face-off once more on Saturday night, but the 49ers will also be in confident mood after seeing off the Cowboys.

Whatever the outcome, history tells us it should be another epic encounter.

Watch the San Francisco 49ers at the Green Bay Packers in the divisional round of the NFL playoffs, live on Sky Sports NFL from 1.15am in the early hours of Sunday morning.