Baker Mayfield came into the game on the Rams' second offensive possession, just two days after being claimed off waivers following his release by the Panthers; the QB went 22-of-35 passing, for 230 yards and the game-winning TD; "It's a pretty damn good story," he said after the win 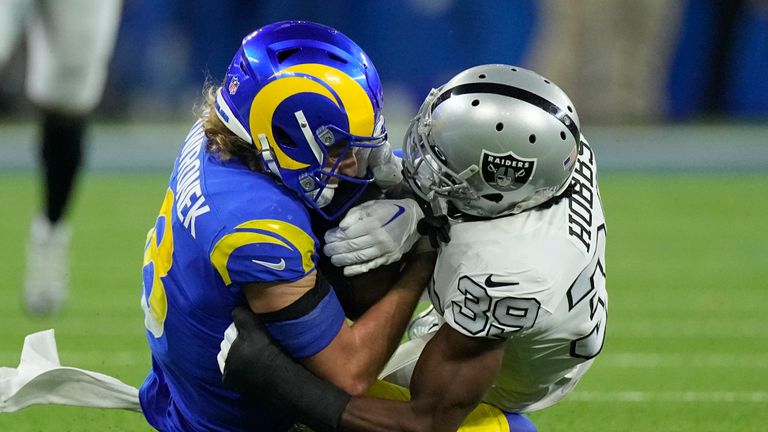 Just two days after the Rams (4-9) claimed Mayfield off waivers following his release from the Carolina Panthers, the former No 1 overall pick from the 2018 Draft went 22-of-35 passing, for 230 yards and that game-winning TD after coming into the game for starting QB John Wolford on LA's second offensive series.

Mayfield said he had "a lot of emotions" after the victory, capping an improbable end to a frantic four-day period which started with him requesting his release from Carolina after being told he would be the team's third-string QB behind Sam Darnold and PJ Walker.

"It's a pretty damn good story," Mayfield said. "I'll be honest with you. It's pretty special... I love to compete. I love this game." 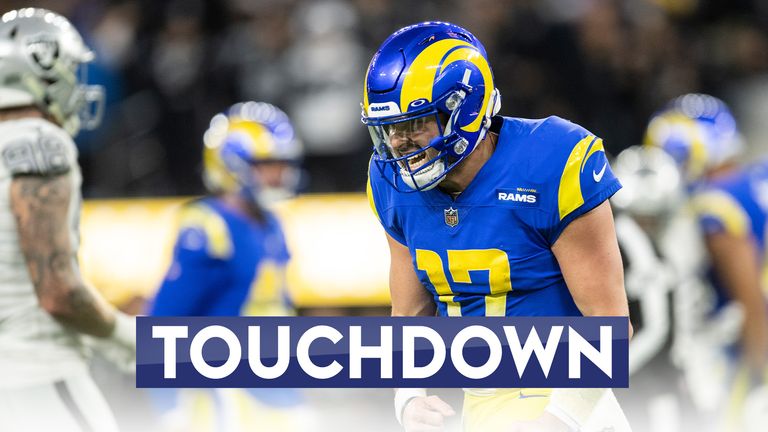 Los Angeles trailed 16-3 with 12 minutes and 20 seconds to play after Daniel Carlson was successful with his third field goal of the night for the Raiders, but Mayfield coolly engineered a nine-minute, 75-yard scoring drive, capped with a Cam Akers goal-line run - one play after converting a key fourth down with a gritty, contested catch.

The Los Angeles defense then stopped Derek Carr and the Raiders offense by the two-minute warning, only for AJ Cole to punt the ball all the way back to the Rams' two-yard line.

Undaunted and with no timeouts left, Mayfield led LA downfield on a stunning 98-yard drive in which the QB completed five of six throws for 80 yards.

The Rams reached the Vegas 23-yard line with 15 seconds left, and Mayfield promptly found Van Jefferson in the end zone for the game-winning score, setting off frenzied celebrations in SoFi Stadium as the defending Super Bowl champions finally snapped a six-game losing streak.

Las Vegas (5-8) had led almost the entire game, scoring on their first three possessions - including a TD for the league's leader in rushing, Josh Jacobs - and taking a 13-3 lead into half-time. It could have been more, as they reached the Rams' 10-yard line in the last minute before the break, only for Carr to be intercepted in the end zone.

It means the Raiders drop to 0-4 this season in games they've been leading by double digits at half-time - the most by any team in the NFL in a single season since 1930 - and the defeat serves as a bitter blow to their playoff hopes in the AFC after they'd won three straight coming into Thursday night. 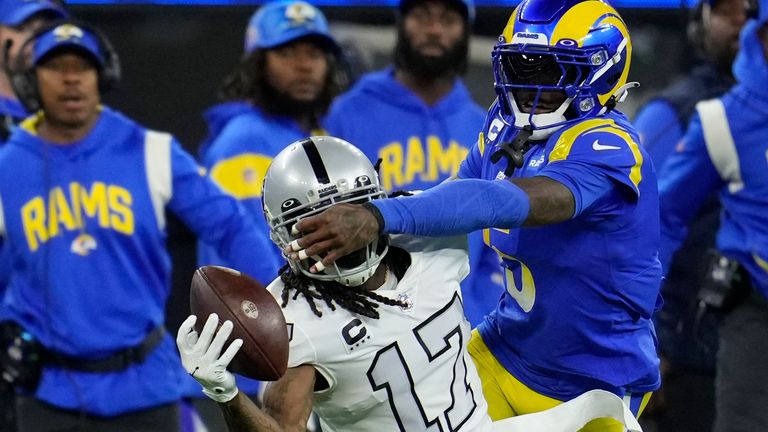 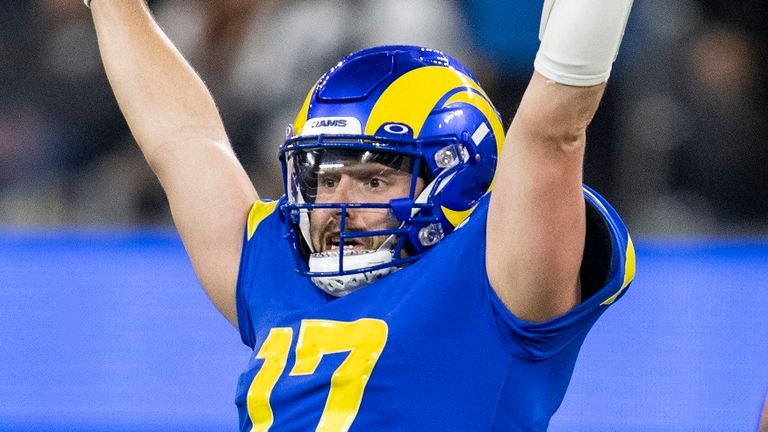 Mayfield: I don't know if you could write it any better'

Rams quarterback, Baker Mayfield: "I don't know if you could write it any better than that. Obviously, we'd like to be a little bit more stress-free, but it's a pretty damn good story, I'll be honest with you. It's special. 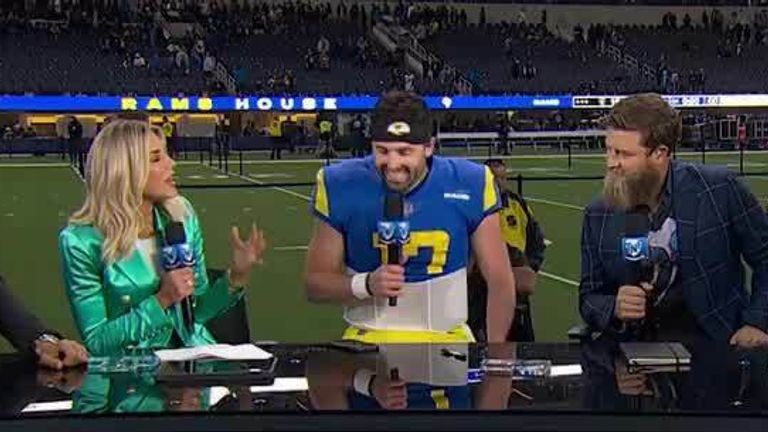 "I'm just looking to be the best version of me possible. Learning and improving in the system, trying to take away from a great group of guys that have had a lot of success... take in as much as I can and let the pieces fall where they may.

"I can't control the future. I know I have the next four games here. Trying to build on that and just be the best version of me and improve."

Rams head coach, Sean McVay: "You can't say enough about Baker Mayfield and the leadership, the resilience, the competitiveness.

"What a quick study. He just got here five minutes ago and figured out a way to be able to do some special things tonight.

"Man, you forget what winning is like, and it sure is fun." 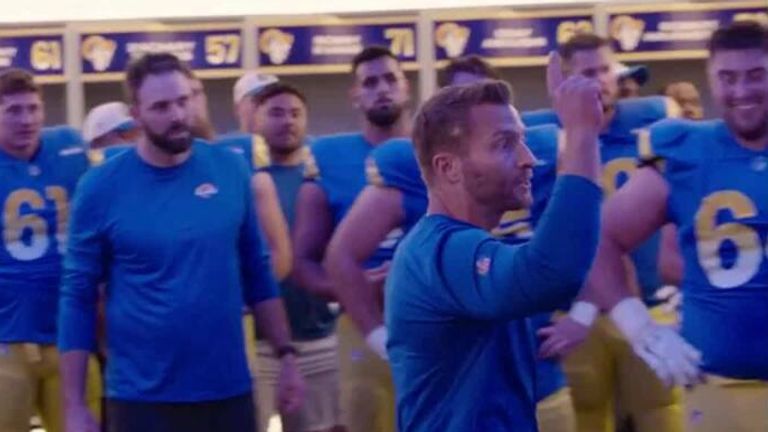 Raiders quarterback, Derek Carr: "It's tough. There's really cool stories and cool moments for some guys. I'm sure Baker will have that moment for the rest of his life... It's frustrating.

Raiders head coach, Josh McDaniels: "We didn't finish the game. The bottom line is, until we figure out how to stop losing games with mistakes that we do to ourselves, then it makes it very difficult to win.

"You can't really win until you stop from losing. Penalties and turnovers contribute to that. This isn't an offense, defense or special teams thing. It's a team thing.

"We can not let our foot off the gas. I'm trying to play the same way we were playing when the game starts. Obviously, I haven't done a good enough job of being able to get us to do that."

Tom Brady takes his Tampa Bay Buccaneers (6-6) to San Francisco this Sunday to face the NFL's number one-ranked defense in the 49ers (8-4), while there is also a crucial NFC East showdown between the New York Giants (7-4-1) and Philadelphia Eagles (11-1).

The action at MetLife Stadium gets under way at 6pm, live on Sky Sports NFL, while we then head out to the west coast for a matchup between quite the contrasting quarterbacks. Although San Francisco's top-ranked defensive unit will be hoping to tame Brady, the 45-year-old, seven-time Super Bowl winner goes up against 22-year-old rookie Brock Purdy, following Jimmy Garoppolo's season-ending injury last weekend.

Purdy, who was taken with the very final pick of the 2022 NFL Draft - a position that has seen the player selected become affectionately known as 'Mr. Irrelevant' - was just four months old when Brady himself was drafted, while he had just turned two when he won his first Super Bowl title. Kick-off in Santa Clara is at 9.25pm.

Rounding off the Sunday night action, we join our friends at NBC for Football Night in America and Sunday Night Football, with the clash between the Los Angeles Chargers (6-6) and Miami Dolphins (8-4) at SoFi Stadium, with the two teams battling for playoff positioning in the crowded AFC conference - kick-off is at 1.20am, early on Monday morning.