21-year-old quarterback becomes first man to be drafted in the first rounds of both the NFL and MLB Drafts; Raiders and Giants make three selections on opening night For the second straight year, the number-one pick in the NFL Draft was a Heisman Trophy-winning Oklahoma Sooners quarterback - unlike in 2018, it was no surprise on Thursday night when Kyler Murray's name was picked by the Arizona Cardinals.

Who is Kyler Murray? We profile the No 1 pick in the Draft

Murray followed Baker Mayfield in starting under centre for Oklahoma last year, winning the best player in college award, and completing the triple-header when Arizona opted for his skills with their first No 1 pick since the franchise was based in Chicago in the 1950s.

The opening night of NFL's gloriously glamorous three days of age-old schoolground-adage 'captain first pick' threw up plenty of trades, but no drama with the opening selection.

Murray began to rocket up NFL teams' rankings after declaring for the Draft, committing to football and turning his back on a multi-million dollar contract with the Oakland As having been selected ninth in 2018's MLB Draft.

On Thursday night in downtown Nashville, despite late rumours of the Cardinals assessing the credentials of Quinnen Williams, it was Murray whose name was called first by NFL Commissioner Roger Goodell.

"It's been a dream of mine since I was a kid, all the hard work," said Murray on stage after the pick. 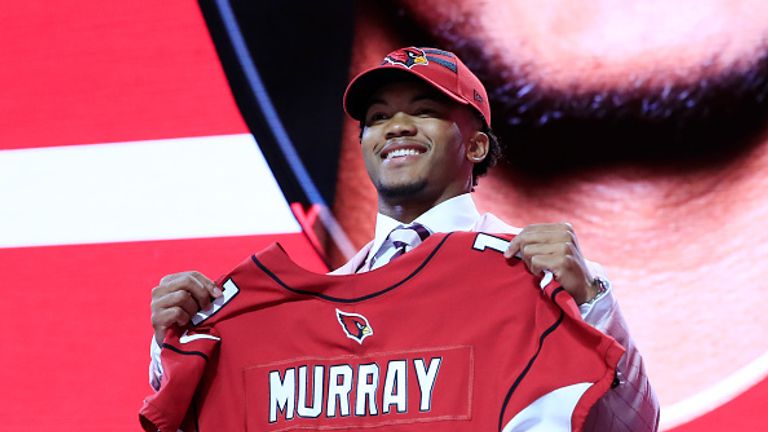 "Everyone who's been in my corner, who's pushed me, I can't thank them enough. I thank God. This is just surreal."

Murray links up with new head coach Kliff Kingsbury in the desert and looks a perfect fit for the much-vaunted 'Air Raid' college football offensive style, especially after Kingsbury had recruited Murray to Texas A&M and said in an October interview while head coach at Texas Tech that he 'would take Murray with the first pick of the draft if I could.'

The drama does not end there, as there will be repercussions with the move coming just 12 months after the Cardinals used their first-round selection in 2018 to pick a quarterback.

That saw Arizona trade up to land Josh Rosen with the 10th pick and Rosen's future remains up in the air. No trade materialised on Thursday night, despite speculation throughout the evening and even while the Cardinals were on the clock.

With the 2019 NFL Draft approaching, we ask you: Who has been the best No 1 pick in the last decade?

Mention of last year is apt. In 2018, for the first time since 1999, five quarterbacks were selected in the first round and while buzz had been building around this year's class, only three signal-callers were picked on opening night.

Duke's Daniel Jones was the second QB called, the New York Giants using the first of their selections to bring in the man they hope will succeed two-time Super Bowl MVP Eli Manning who, at 38, is in the final year of his contract.

Big Blue added Clemson tackle Dexter Lawrence with their 17th pick, the pick they received from Cleveland in exchange for Odell Beckham Junior, and in the closing stages of the evening returned for a third pick.

For the first time in the franchise's history, they had three selections in the opening round, trading up from 37 to take the first cornerback of this year's class in the shape of Deandre Baker with the 30th pick 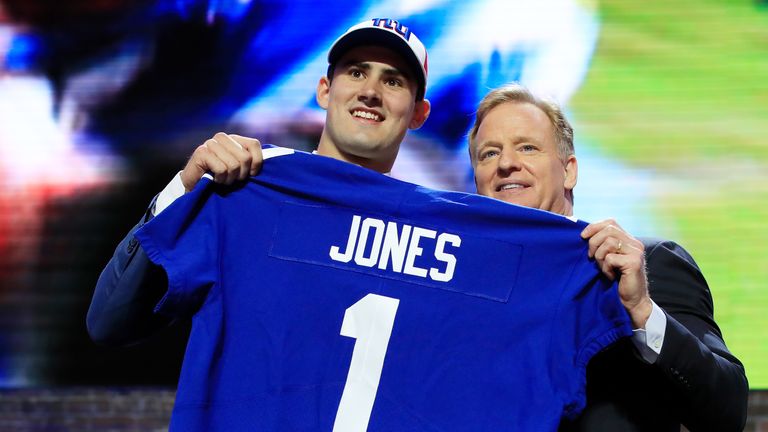 The only other QB called was Maryland native Dwayne Haskins, who was picked by the QB-needy Washington Redskins who moved up again later in the evening to pick Montez Sweat.

There was no place in the first round for quarterback Drew Lock, who will be a name to watch when the Draft continues on Sky Sports on Friday and Saturday.

The longest-ever run without a wide receiver or running back being selected was halted when Oakland picked RB Josh Jacobs with the 24th overall selection, while the first wide receiver came off the board with the next selection as Baltimore picked up Marquise Brown, the cousin of Antonio Brown.

It's Murray's talent, and position, that made him the first name off the board and potentially something of a risk - however, in an anticipated generational class of defensive talent, names two and three on the night are likely to prove All-Pro selections for their teams.

Nick Bosa (49ers) and Quinnen Williams (Jets) were selected after the Murray headline act and both are regarded by experts as the two best players in the Draft. For the first time since 1985, three defensive linemen were selected in the top five when Oakland chose Clemson defensive end Clelin Ferrell with their first pick. 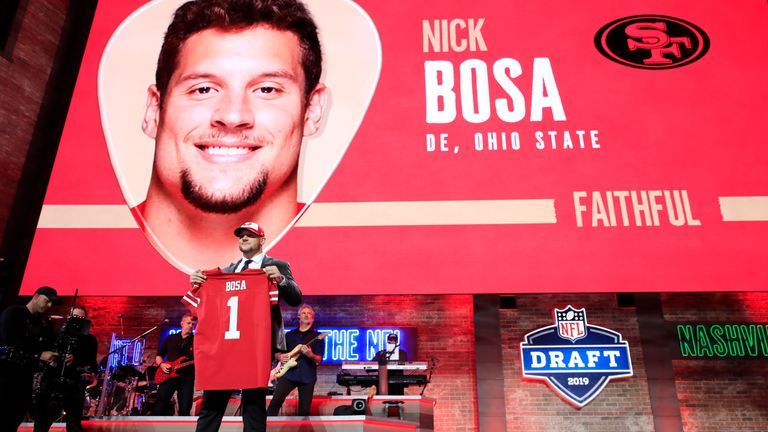 The Raiders, with three first-round selections and a first-year general manager in Mike Mayock, added a third name with the 27th pick, opting for Mississippi State safety Johnathan Abram while the Patriots ended the evening with the 32nd pick and opted to bolster their receiving corps with N'Keal Harry.

On a memorable evening in Nashville, the host Tennessee Titans did not seek out an alternative to QB Marcos Mariota, or offensive support. Instead they chose Jeffery Simmons, a defensive tackle who is likely to miss the upcoming season with a torn ACL. 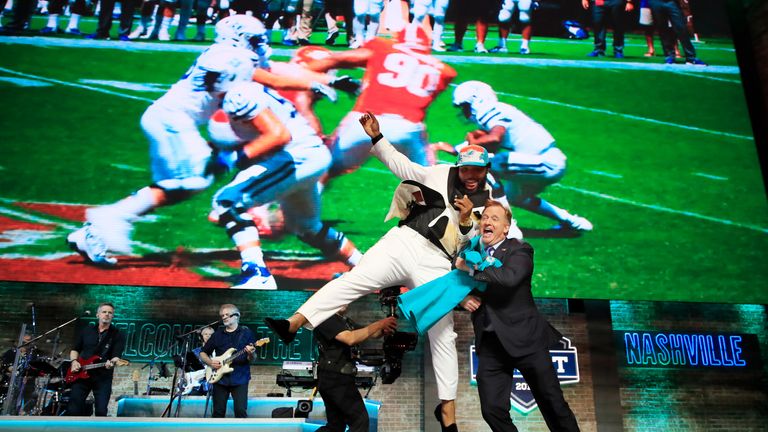 Pittsburgh were the first team to make a move up the board, trading up to take Denver's 10th overall pick to select explosive Michigan linebacker Devin Bush. That was the first of seven trades on the night, including Green Bay's move for safety Darnell Savage and Philadelphia moving up three spots to claim tackle Andre Dillard.

With Day One of the 2019 Draft in the book, comparisons with last year are obvious. Amid all the talk of Josh Allen and Sam Darnold, it was Mayfield that the Browns selected and after a brilliant year that transformed the 0-16 Browns, hope reigns for Cleveland who had no first-round pick this year.

Whether Murray has a similar effect on his new team remains to be seen.

Coverage of this year's NFL Draft continues on Sky Sports with Day Two and Three, Friday's coverage gets underway on Sky Sports Action from 11pm and on Saturday we are underway from 5pm on Action via the red button