The infamously gangling Michigan quarterback pictured at the Scouting Combine 20 years ago has since evolved into the nucleus of one of the NFL's great dynasties, soaking up the underdog status in his veteran years as added defiance of familiar doubts.

Stay up-to-date with the latest free agency, draft and injury news throughout the NFL offseason.

Now, for the first time in his career, the 42-year-old is poised to spice up the open market as an unrestricted free agent. Could the end really be near for one of the league's most successful marriages?

"One thing he told me - 'Nobody knows anything. So anyone who is telling you they know, they don't, know,'" said former Patriots offensive coordinator Charlie Weis of a recent exchange over text with Brady on Sirius XM NFL Radio's 'Opening Drive' show.

The NFL's serial-winning antagonist has the league on strings, puppeteer to free agency hypothesising and omniscient to the offseason's most sought-after story ending.

It was all too fitting that Brady's final play of last season was a pick six against the Tennessee Titans in a game marking the Patriots' earliest playoff exit in 10 years.

Talk of retirement was firmly delayed in that moment, the disappointment arriving as the latest obstacle drenched in motivating reminders of his age and dip in production. 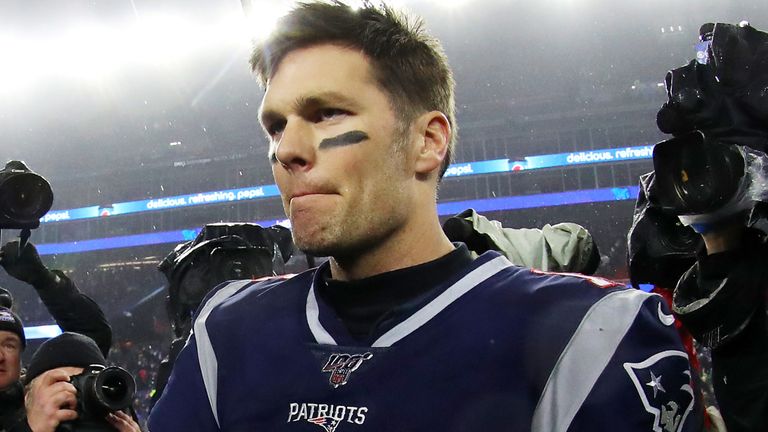 Cornerback Josh Norman has agreed to a one-year deal, worth $6m, to join the Buffalo Bills, reuniting with Sean McDermott.

Brady hinted as much in the aftermath of New England's wildcard elimination, playing down suggestions of calling it a day but admitting to his uncertainty over a new deal with the Patriots. Owner Robert Kraft weighed in with assurance over his desire to bring Brady back, while Bill Belichick was typically coy on the matter.

Cue a cryptic Instagram post of Brady bearing a ponderous figure alone in the Gillette Stadium tunnel - later proving to be part of an advert - followed by Julian Edelman's teasing 'He's coming back, he's coming back' while sitting beside his quarterback at a UNC vs Syracuse basketball game.

Obada: The offseason is the worst time

After the intensity of Super Bowl and playoffs, the NFL offseason looms into view - Carolina's Efe Obada talk to Sky Sports about a new deal and a long wait.

With Kraft avoiding interfering with negotiations unless the space is 'narrow', as reported by NBC Sports Boston's Tom Curran, the framework of any deal will ultimately come down to the communication between the greatest quarterback and head coach pairing of all time.

How did we get here?

Brady earned the right to head into last summer's negotiations hoping for a deal reminiscent of Drew Brees' two-year $50m contract with the New Orleans Saints.

After all, since putting pen to paper on a $41m extension in 2016 he had inspired the Patriots to two Super Bowl triumphs in three visits.

An extension failed to materialise and Brady instead signed a one-year deal including a requested clause denying the Patriots the ability to tag him, thereby giving him the opportunity to test free agency this year - as he remains set to do.

Having once appeared so keen to commit through 2019 and beyond, his apparent preference to not make it a multi-year deal in the end begs the question as to what the Patriots had offered - or hadn't offered.

The organisation's lack of urgency is distant from the love and appreciation Brady likely seeks, and suggests the deal he rebuffed last summer may well be the one that stands today.

What is seemingly missing from discussions is Brady himself laying out his demands on the table, whether that be salary or the addition of the receiver options he dearly lacked in 2019. While the plethora of free-agent quarterbacks dominate offseason discussion, there are several talented defensive options to take note of.

Unless he makes those wishes clear, the Patriots appear in no mood to take the next step.

The idea that Brady has refrained from detailing his preferences meanwhile reaffirms the belief he is intrigued by a first experience of free agency, where teams will undoubtedly be prepared to say all the things the Patriots currently aren't.

Belichick is no stranger to cutting sentiment out of business decisions, but it may be him letting Brady know he needs him that restores some harmony. If he doesn't, should we assume he believes the Patriots are equipped to progress without him?

Where could he land?

There is a sense the impending quarterback frenzy is just waiting for a Brady-shaped domino to fall before kicking into motion.

Among those reportedly interested had been the Titans, however it was announced on Sunday that they had reached an agreement with Ryan Tannehill over a new long-term contract worth $118m following his remarkable comeback year.

The San Francisco 49ers have also been touted as potential suitors as fans dare to believe whether Brady would have led them to victory over the Kansas City Chiefs in Super Bowl LIV. It's a valid question.

A move to the Bay Area writes its own headlines, with current quarterback Jimmy Garoppolo having looked destined to succeed Brady in New England before he was traded to the 49ers, reportedly against the wishes of Belichick.

Philip Rivers' departure in Los Angeles has catapulted the Chargers into contention, while the Raiders might be tempted by the prospect of kicking off life in Las Vegas with a ticket-selling Brady exhibit.

What next for the NFL's free agent QBs?

With the NFL's offseason upon us, we look at the options available to some of the quarterbacks that are set to hit free agency.

The Tampa Bay Times reported this week that the Buccaneers are prepared to go "all in" on Brady, head coach Bruce Arians evidently not sold on Jameis Winston after his league-high 5,109 passing yards and league-high 30 interceptions.

The Patriots can try and play down Brady's market interest all they like, but he'll have options. There's no doubt about that.

Admiration for the genius of Patrick Mahomes will have been accompanied by hurt for Brady as the new era of quarterbacks, including the likes of Deshaun Watson and Lamar Jackson, previewed a decade of dominance. This was Brady's league, and you get the feeling he isn't quite ready to pass on the baton.

Follow us for all the latest free agency, trade and draft news throughout the offseason

He still wants to win. To do so he'll need the talent he lacked around him last year. Will that be available to him in New England or elsewhere?