Drew Brees and the New Orleans Saints will be without Michael Thomas when they host the Los Angeles Chargers on Monday Night Football after being benched for 'disciplinary reasons'.

The Saints officially ruled out Thomas on Sunday afternoon, citing his status as "out/not injury related."

A two-time All-Pro selection and the league's 2019 Offensive Player of the Year, Thomas has racked up 1,000 or more receiving yards in each of the four seasons since being drafted in the second round in 2016 out of Ohio State. 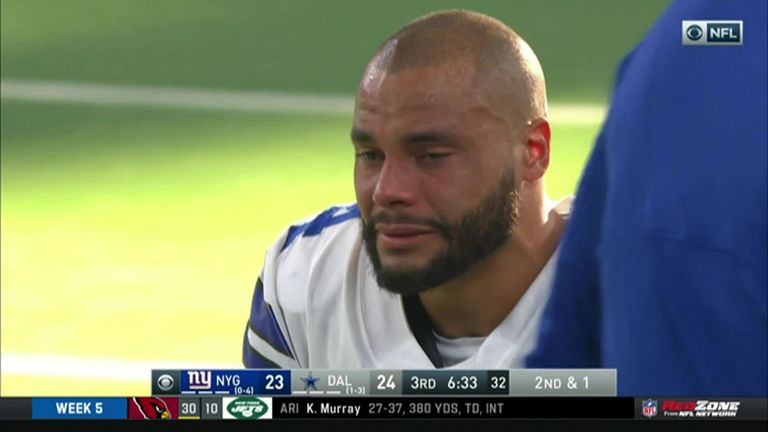 Dallas Cowboys quarterback Dak Prescott has had surgery on his right ankle after suffering a compound fracture and dislocation during their 37-34 win over the New York Giants on Sunday.

The gruesome injury will end Prescott's season. "I feel terrible for him," Cowboys coach Mike McCarthy said after the game. "He was having a tremendous year. He's made such an impression on me.

"He's the leader of this team. This will just be another chapter in a great story. He's a fine young man."

Prescott sustained the injury in the third quarter after gaining nine yards on a quarterback run, getting tackled by Giants safety Logan Ryan.

He immediately clutched his right lower leg. After a cast was placed on the leg, Prescott, crying, was carted off the field at AT&T Stadium in Arlington, Texas.

The Atlanta Falcons fired head coach Dan Quinn and general manager Thomas Dimitroff on Sunday night, hours after the team lost at home 23-16 to the Carolina Panthers to fall to the franchise's first 0-5 start since 1997.

Team president and CEO Rich McKay will take over day-to-day football operations and will assist owner Arthur Blank in a search for a new GM and coach. According to a release by the team, Dimitroff's duties will be handled by various members of the Falcons staff for the rest of 2020.

Last month, the Falcons blew fourth-quarter leads of 15 and 16 points in consecutive losses to the Dallas Cowboys and Chicago Bears, respectively.

Those collapses rekindled Falcons fans' painful memories of Atlanta's infamous breakdown in Super Bowl LI, where Atlanta squandered a 28-3 lead in a 34-28 overtime loss to the New England Patriots.

Quinn is 43-42 overall since taking over the Falcons for the 2015 season, but just 14-23 since the start of the 2018 campaign. He is the second NFL head coach to lose his job this season. The Houston Texans parted ways with Bill O'Brien earlier this month.