The time for talking is nearly over, with the 2021 NFL season just around the corner. And as kickoff edges ever closer, Sky Sports NFL writers are breaking down all eight divisions from the key men to the marquee acquisitions.

Thursday, September 9 is the date to mark in your diaries as the reigning Super Bowl champions Tampa Bay Buccaneers host the Dallas Cowboys, which you can see live on Sky Sports NFL from 1.20am in the early hours of Friday morning.

For now, let's take a look at the contenders - continuing with the AFC North.

Key Man: For as long as he's there, the Ravens offense shall operate to the tune of Lamar Jackson, who led the NFL's No. 1-ranked rushing attack with 1,005 yards for nine touchdowns in 2020 and took more strides as a pocket passer in Greg Roman's scheme before shaking the playoff monkey off his back with his first career postseason victory. Asked this summer if he believed this would be the year defenses worked him out, Jackson replied: "I doubt it."

The departure of pass rushers Matthew Judon and Yannick Ngakoue also calls on the experience of 34-year-old Calais Campbell and 32-year-old Justin Houston to set the tone off the edge, while raising the expectation levels facing second-year linebacker Patrick Queen.

Major Additions: We mentioned Houston above; the former Indianapolis Colts outside linebacker was recently compared to Jedi Master Yoda from the Star Wars film franchise by 2021 first-round Odafe Oweh, whose athleticism and raw technique has been taken under the wing of the veteran. 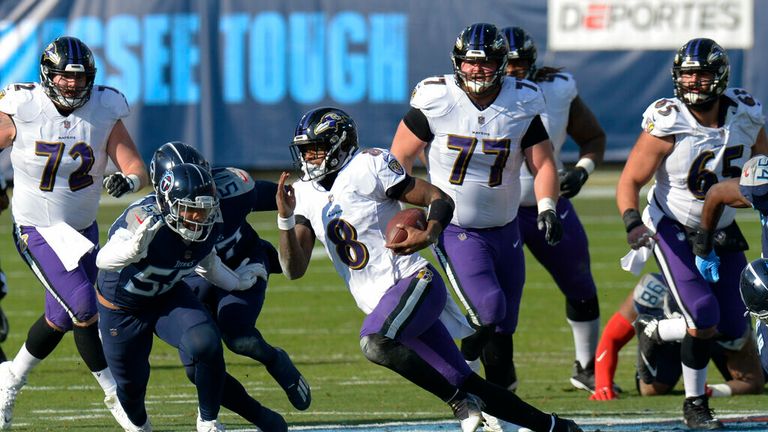 Last Season: Baltimore finished 11-5 and second in the division behind the Pittsburgh Steelers after winning five of their opening six games, the one defeat coming against the superior Chiefs, before losing four out of five midway through the campaign. That included a 19-14 loss to the Steelers during which the Ravens were missing 18 players as a result of a COVID outbreak, with Jackson, Campbell, Andrews and running backs Mark Ingram and J.K. Dobbins among those absent.

Five successive wins to close out the campaign, including a 47-42 thriller against the Cleveland Browns in Week 14, secured a playoff berth for the Ravens. Jackson would lead the team to its first postseason win since 2014-15 and his first ever with a 20-13 victory over the Tennessee Titans on Wild Card weekend, before he was intercepted in the end zone for a pick six and later forced off with a concussion in their 17-3 Divisional Round loss to the Buffalo Bills.

Baltimore Ravens: 2020 Tale of the Tape

Prospects: With fresh targets at Jackson's disposal, the former league MVP only continuing to improve and 'Wink' Martindale's defense still of a top 10 calibre, the Ravens should be storming to the playoffs. That said, the threat of the Browns and Steelers has the AFC North looking like one of the toughest divisions to get out of in the league. The loss of running back Dobbins to a season-ending ACL tear in the team's preseason finale meanwhile came as a cruel and untimely setback, and leaves a few added questions surrounding an instrumental ground game now set to be led by Jackson and Gus Edwards.

Key Man: The Bengals have their man back, and have hopefully learned their lesson. Joe Burrow was battered and bruised behind lacklustre pass protection before eventually seeing his rookie year halted by a season-ending torn ACL and MLC against Washington in Week 11. Despite his rough ride prior to then, the No. 1 overall pick had been in Rookie of the Year contention as the ice-cold, thread-the-needle locker-room-galvaniser as advertised coming out of LSU. He is the face of Cincinnati. The lesson? Protect him at all costs.

Major Additions: Speaking of that 'lesson', it is the reason Bengals fans were divided when the organisation overlooked offensive tackles Penei Sewell and Rashawn Slater to instead reunite Burrow with former LSU wide receiver Ja'Marr Chase with the No. 5 overall pick. Nevertheless, Chase will be a superstar at the next level.

Protection did arrive in the second round in former Clemson guard Jackson Carman, followed by pass rush assistance in third-round pick Joseph Ossai, who has since suffered a likely season-ending knee injury. The latter in mind along with the departure of Carl Lawson, the Bengals will be hoping free agency signing Trey Hendrickson, who led the Saints with 13.5 sacks last year, hits the ground running.

Last Season: Yet another test of patience for those in Cincinnati as Zac Taylor's side finished 4-11-1 and fourth in the division to extend the franchise's playoff drought to five straight seasons. Burrow's brutal injury was a prime dampener after his exceptional start to life in the NFL, star and since-departed defensive tackle Geno Atkins missed all but one game through injury, starting left tackle Jonah Williams was limited to 10 games due to injury, running back Joe Mixon's season came to an end after six games and wantaway edge rusher Carlos Dunlap was traded to the Seahawks after seven games.

Among the positives was early signs of a potent relationship between Burrow and Tee Higgins, while Jessie Bates III asserted himself as one of the most gifted safeties in the league. And how's this for a completely random stat attack? The Bengals' 19 fourth-down conversions was tied for the second-most in a single season in NFL history.

Cincinnati Bengals: 2020 Tale of the Tape

Prospects: Such is the strength of the division that a playoff berth looks out of reach for now, particularly as Burrow plays his way back in after a lengthy layoff. It would be wrong if not every head coach and player set the bar as high as the postseason, but it's all about progress for Taylor and the Bengals, and hovering around the seven or eight-win mark would probably represent a step in the right direction.

Key Man: For the Browns, it's almost a case of 'right, remember what we did last time' as they enter 2021 on the back of a breakthrough year for the franchise. That means Baker Mayfield maintaining the 95.9 passer rating and 72.1 quarterback that blew his first two seasons out the water, Nick Chubb pounding the rock for over 1,000 yards and Myles Garrett mixing it with the upper echelon of quarterback-hunters. It's that spine, along with Stefanski, that really makes this team tick. 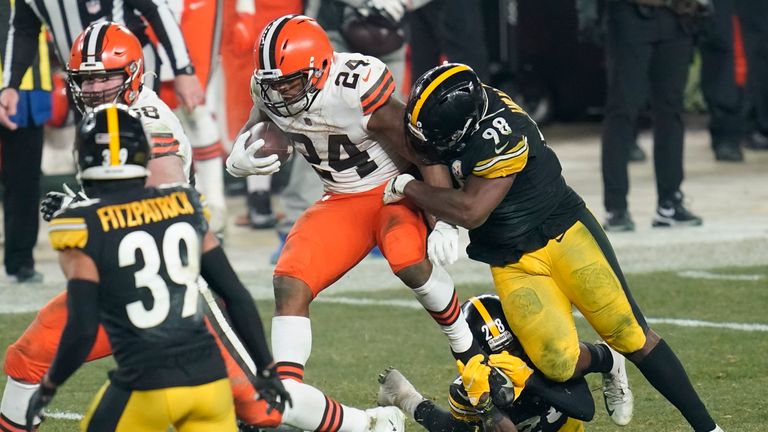 Last Season: It was the season they had waited so long for. Cleveland finished 11-5 and third in the division to clinch their first playoff berth since 2002, although risked 'Brownsing' it up in Week 16 as they were beaten by the New York Jets to leave them needing a victory over the Steelers on the final day of the regular season to seal the deal.

They followed it up by stunning their old foes Pittsburgh 48-37 in the Wild Card round to record their first playoff win since 1994 having coasted to a 35-10 lead at half-time following three Ben Roethlisberger interceptions. Their run was eventually brought to a halt by a 22-17 Divisional Round defeat to the Chiefs, the defending Super Bowl champions surviving the loss of Patrick Mahomes to a concussion to edge a thrilling finale behind backup Chad Henne.

Cleveland Browns: 2020 Tale of the Tape

Prospects: Call it bold, but this Browns team can win the division. The offensive line is arguably the most accomplished in the league, a strengthened defense has top 10 potential, Odell Beckham Jr. is back from injury, Donovan Peoples-Jones and Rashard Higgins are both worthy third-choice receivers, Chubb and Kareem Hunt serve as a top-five rushing attack, the trio of Harrison Bryant, Austin Hooper and David Njoku can fulfil Stefanski's desired tight end sets and the man at the helm has asserted himself as one of the brightest coaching minds in the league.

Key Man: The Steelers drafted Najee Harris with the intention of using him as a three-down running back, and there is every chance he becomes a staple of this offense from the early weeks of the season. Particularly as an ageing Ben Roethlisberger, coming off a sticky finish to last season, executes the vision of new offensive coordinator Matt Canada, whose motioning, 'bells and whistles' spread offense contrasts the scheme the veteran quarterback has been used to over the years. And on defense, TJ Watt and Devin Bush are your chief disruptors.

Major Additions: The response to owning the worst rushing attack in the league last season was to draft the best running back on offer with the 24th overall pick. And that man was Alabama's Najee Harris, with James Conner meanwhile heading to the Arizona Cardinals in free agency. The response to Vance McDonald's retirement was to draft one of the best tight ends on offer; that being Penn State's Pat Freiermuth, gloriously-nicknamed 'Baby Gronk'.

Guard/center Kendrick Green was taken out of Illinois in the third round to address a remodeled offensive line, and the Steelers acquired veteran edge rusher Melvin Ingram in light of Bud Dupree's departure in free agency.

Last Season: The year started perfectly for the Steelers as they coasted to 11-0 behind a rampant defense and a rejuvenated Big Ben following his injury layoff in 2019, until their run came to an end in Week 13 when they squandered a 14-0 cushion against Washington. It kickstarted a three-game losing streak as they lost four of their last five heading into the playoffs as division winners, the loss of Bush in Week Six and Dupree in Week 12 to season-ending ACL injuries proving major setbacks.

Their playoff run all but ended in a disastrous first quarter of their Wild Card matchup against the Browns as they fell to a 28-0 deficit after a botched snap had gifted Stefanski's side a touchdown on the first play of the game. The Steelers went on to lose 48-37 in their first defeat at home to Cleveland since 2003.

Pittsburgh Steelers: 2020 Tale of the Tape

Prospects: A lot rides on how a new-look offensive line fares, with long-serving center Maurkice Pouncey having retired, David DeCastro having been released and Alejandro Villanueva signing with the Ravens. But a weapons pool of Chase Claypool, JuJu Smith-Schuster, a Diontae Johnson tipped to make a jump, Najee Harris, Eric Ebron, and Freiermuth gives Big Ben and Canada everything needed to reach the playoffs, Anthony McFarland's familiarity with the latter from their time together at Maryland making for another interesting component. It's such a competitive division you would be hard-pushed picking between the Steelers, Ravens and Browns with any real conviction.