Will Matthew Stafford be the difference for Sean McVay's Los Angeles Rams?

Head coach Sean McVay has had four straight winning seasons with Los Angeles Rams but offense has faltered in last two; Rams traded for quarterback Matthew Stafford this summer; Watch Bears at Rams on Sunday night/Monday morning at 1.15am on Sky Sports NFL and Main Event 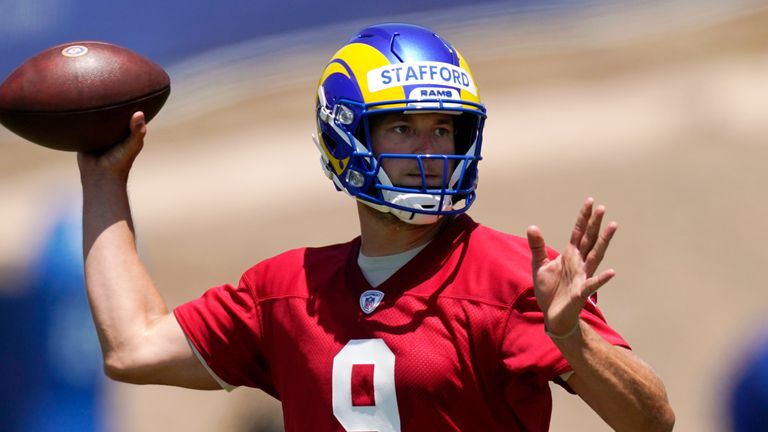 The Los Angeles Rams boast arguably the best defense in the entire NFL but have lacked offensive spark in recent seasons. Will new quarterback Matthew Stafford be the difference as they aim to get back to the Super Bowl?

When head coach Sean McVay arrived on the scene in Los Angeles in 2017, he was the talk of the NFL. He was just 31 years of age and considered one of the league's brightest offensive minds, and his Rams took the league by storm.

McVay inherited a 4-12 outfit but under his guidance, Los Angeles won the NFC West at 11-5 before losing to Atlanta in the Wild Card round. They provided an explosive, fast-paced offense that scored the most points in the entire league.

In 2018, they really took off. They were second in yards and points. A 13-3 regular-season record gave them the second seed in the NFC, and they took care of the Dallas Cowboys in the divisional round before going into New Orleans and beating the Saints in overtime in an NFC Championship thriller.

However, their 13-3 Super Bowl loss to New England, in which the offense fell completely flat, was the start of real concerns about quarterback Jared Goff and his ability to do what McVay required. Goff completed 19 of 38 passes that day for 229 yards. He threw one pick, was sacked four times, and had a 57.9 passer rating.

Los Angeles gave Goff two more seasons to find his form and reach his potential, and as a team, they still had some success (Goff went 9-7 in 2019 and 9-6 last season before going 1-1 in the postseason, albeit playing hurt).

However, in those two seasons, the offensive output declined. In 2019, they fell to 11th in points scored, and last year all the way to 22nd.

Goff's yards may have gone up but his efficiency decreased, as he went from 60 touchdowns, 19 interceptions and a 100.8 quarterback rating in years one and two to 42 TDs, 29 picks and an 88.1 rating in years three and four.

It wasn't working out, and the Rams took action this offseason. They sent Goff - along with a third-round NFL Draft pick in 2021 and first-rounders in 2022 and 2023 - to the Detroit Lions for veteran Stafford. A new era of the McVay offense begins on Sunday - when the Rams host the Chicago Bears, live on Sky Sports.

After 12 seasons in Detroit, and just three playoff appearances (all losses), Stafford wanted a change. The Lions are rebuilding, yet again, and the man who was the fastest player in NFL history to reach 20,000, 30,000 and 40,000 career passing yards yearned for an opportunity at a team that has a chance to compete.

At 33 years old, the 2009 No 1 overall pick has not had enough of his career with a strong team around him, but the Rams were willing to pay the price, and McVay gets an upgrade at the most important position in football.

When NBC's Peter King spoke to Stafford over the summer, the QB said of McVay: "I have a lot of respect for what he's been able to do at a really young age - to be able to command a room, command a team, an organisation at a young age is really tough.

"He has obviously had a ton of success with his offense. His defense has been playing great for years as well.

"When [the trade] finally went through, I was extremely excited to get the opportunity to work with a guy that's as smart as he is and is as charismatic, and has a grasp on leadership. All of that is really enticing for a quarterback."

Much has been made of McVay's scheme - perhaps more so at the height of its success - and it can be supremely fun to watch: They have players shifting pre-snap, receivers flying across the formation on jet sweeps, and screens seemingly designed for multiple players at one time.

They also run 'packaged plays', allowing players to make decisions about what kind of play happens after the ball has been snapped based on what they see from the defense.

Stafford, who was talking at training camp, called the offense "very complex", but said: "At the same time, it all makes sense.

"There's just quite a bit to it.

"I'm doing everything I can to make sure I'm diving into it and getting as comfortable as I can as quickly as I possibly can.

"As far as it fits me - it would probably fit most quarterbacks, to tell you the truth! It's a really good offense and I'm excited to just keep working hard and try and bring it to life."

While the Rams are hoping Stafford will take their team to an even higher level, there's no doubt Stafford is excited to be on likely the most talented roster he has been on.

Things are different around here. The Rams have the offensive weapons. They have a defensive unit that allowed the fewest yards and points in the entire league last year.

"It's really cool to be on the same team as those guys and I'm just trying to make sure I do my part so that in the end, we can be where we want to be."

What should we expect from the Rams?

If you scour the betting sites for Super Bowl winner odds, you'll generally find the Rams in the top five. How you view their chances will certainly depend on where you view them falling in the strong NFC West.

The Seattle Seahawks will always compete with Pete Carroll and Russell Wilson leading the team, the San Francisco 49ers are just one year removed from reaching the Super Bowl, and the Arizona Cardinals looked contenders in the first half of last season. There are no easy wins here.

However, the Rams might just be the team to beat.

In his latest edition of Football Morning in America, King predicted the Rams will find their offensive form and ultimately beat the Buffalo Bills in Super Bowl LVI in February.

It's not hard to imagine.

First up for Stafford and company are his former NFC North rivals the Bears on Sunday night. Like McVay, coach Matt Nagy had immediate success in Chicago.

He kicked off with a top-three defense in his first year in 2018, and created a top-10 point-scoring offense, on the way to 12-4 record in his first season.

However, again like McVay, he's seen his offense fail in the past two seasons - but to a much larger extent. They finished 29th in points scored in 2019, and 22nd last year, with a combination of Mitchell Trubisky and Nick Foles at quarterback.

Trubisky was let go, Foles was dropped to the bottom of the depth chart, and in came veteran Andy Dalton and 11th overall pick Justin Fields.

Based on his outstanding performances at Ohio State, Fields ticks all the boxes for a franchise quarterback: passer, leader, competitor, running threat, you name it.

But Nagy is holding back on his young QB - perhaps wary of the scary Week One matchup - in favour of Dalton, who did a little (4-5 record, 197 yards per game) with a lot (Ezekiel Elliott, Amari Cooper and CeeDee Lamb among other around him) last year.

There will come a time, maybe on Sunday, maybe in weeks or even months from now when Fields gets his shot, and Bears fans should be excited. In fact, McVay said he is preparing for both Dalton and Fields on Sunday in case that time comes sooner rather than later.

Watch Chicago Bears at Los Angeles Rams on Sunday night/Monday morning at 1.15am on Sky Sports NFL and Main Event.