The Week Nine action in the NFL concludes on Monday night when the Chicago Bears (3-5) take on the Pittsburgh Steelers (4-3) live on Sky Sports NFL from 1.15am in the early hours of Tuesday morning

Upset wins for the Denver Broncos and Jacksonville Jaguars, Josh Allen on Josh Allen action, hope without Derrick Henry for the Tennessee Titans, overtime drama in Baltimore, a near-miss for the Atlanta Falcons and so much more - NFL Sunday had everything.

We look back on some of the biggest storylines... 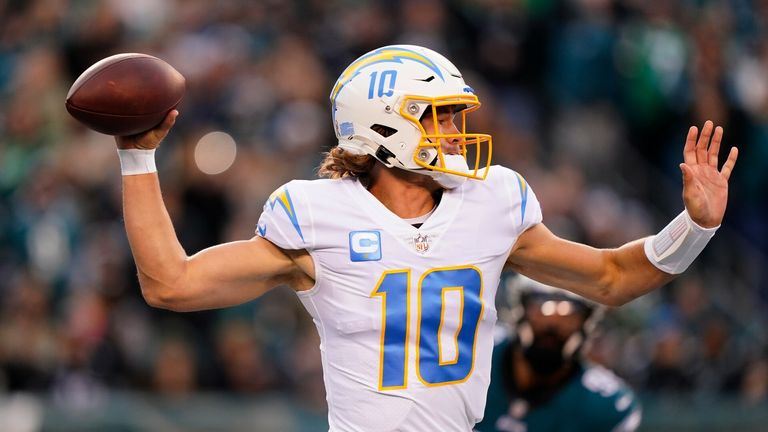 THE NFL GOT DRUNK

The NFL continues to wag its finger disapprovingly at the idea of a relaxed, wind-down Sunday: 'what is this 'chilled' weekend you speak of?'. We have come to know nothing of the kind.

It's not quite an NFL Sunday unless you find yourself scrolling frantically for updates or routinely monitoring multiple screens; it's why we continue to come back for more, why we give up so much sleep immersing ourselves in football.

Amid a weird season, things got even weirder in Week Nine. 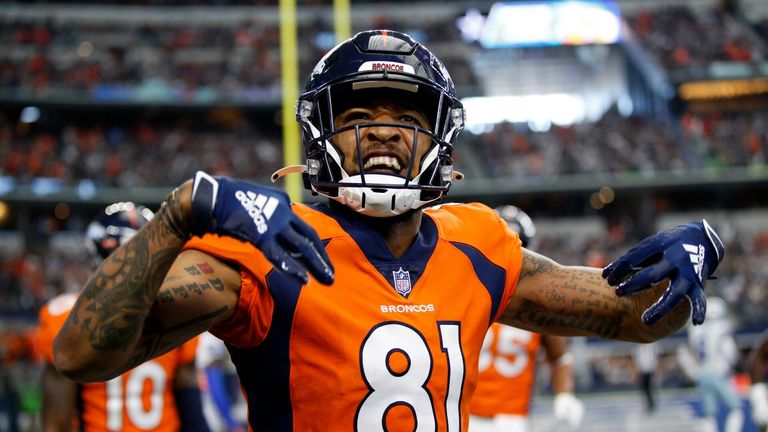 In a week that saw them lose Hall of Fame-bound Super Bowl MVP-winning edge rusher Von Miller, the Broncos momentarily rose from football purgatory to stun a cruising Cowboys team 30-16 after limiting Dak Prescott to a career-worst first-half completion percentage of 35.7 while taking a 16-0 cushion into the break.

As far as post-break-up glow-ups go, rookie Jonathan Cooper proved the new face on the scene with two sacks and five quarterback pressures for Denver.

Elsewhere the Jaguars held the Bills' No 1-ranked scoring offense to just six points in a bizarre upset win for Urban Meyer's side, edge rusher Josh Allen gifting NFL hipsters their namesake gem with an interception and a sack on Buffalo quarterback Josh Allen. The Falcons teased familiar fun-poking headlines when they blew an 18-point, fourth-quarter lead against the Saints before snatching the win on a Younghoe Koo field goal as time-expired, Justin Tucker's field goal with 16 seconds remaining in overtime lifted the Ravens to victory over the Vikings after they had trailed 17-3 late in the first half, and the Giants, who seem to turn up when there is no longer anything on the line, temporarily forgot about their woes with a surprise result against the Raiders.

In fact, such was the drama in the Ravens' game that it seems we all forgot to make a fuss about the fact Lamar Jackson went off for 266 passing yards for three touchdowns alongside 120 rushing yards. Yep, he's pretty special.

Drunk as a skunk.

We need to talk about Cordarrelle Patterson... again. The Falcons spun the three-job wheel and landed on wide receiver for Week Nine as the running back/wideout/special teams wizard made six catches for 126 yards in Atlanta's win over New Orleans, notably hauling in the 64-yard reception that set up Koo's game-winning field goal.

Props also to Matt Ryan, praise of whom's production seems to have become unfashionable; he finished 23-of-30 passing for 343 yards and two touchdowns after yet another more-than-tidy outing. 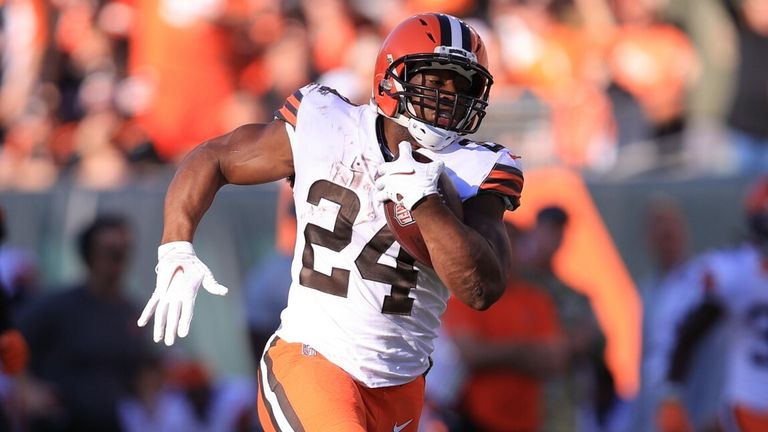 Nick Chubb went to work at the end of a week when Odell Beckham Jr's exit in Cleveland had been the prime focus, flying to 137 rushing yards for two touchdowns to lead the Browns to a statement blowout victory over the Bengals. A barnstorming defensive performance, meanwhile, included 1.5 sacks from Myles Garrett, who now has 12 on the year, two sacks from blitzing cornerback Troy Hill, a 100-yard pick six from Denzel Ward and an interception and forced fumble from John Johnson III.

The latest installment of 'Javonte Williams running as if John Wick trying to save his dog' saw the Broncos rookie pound and burrow and swat and bulldoze his way to a remarkable 30-yard carry through a crowd of bodies as he put up 111 rushing yards in Denver's shock win over the Cowboys. Kyle Brandt's 'angry runs' segment on Good Morning Football has its winner.

After overcoming a Covid false-positive during the week, second-year safety Xavier McKinney starred with two interceptions in the Giants' win over the Raiders. Running back Devontae Booker, meanwhile, put up 99 rushing yards and 23 yards through the air against his former team as he continued as Giants starter in the absence of Saquon Barkley. 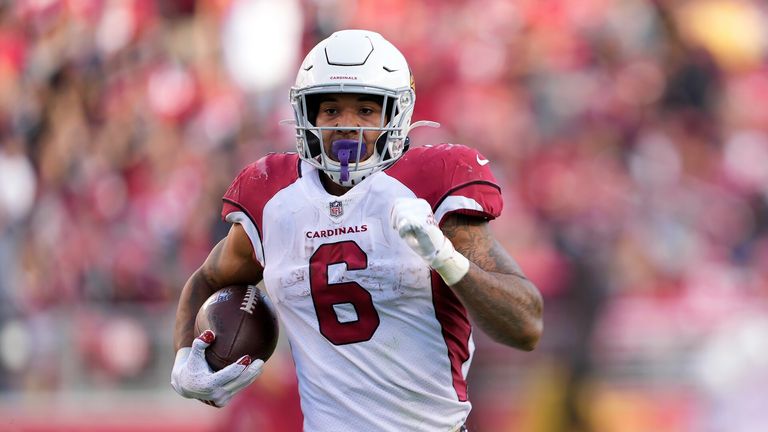 Miami's defense has been, let's say, underwhelming in comparison to the standards it set last year, but some of its best work so far this season was on display in their win over the Texans. Emmanuel Ogbah led the way with four tackles, two tackles for loss, 2.5 sacks, three quarterback hits and one pass defense, while gifted rookie safety Jevon Holland finished with an interception, a pass defense and a quarterback hit.

Cornerback JC Jackson has been a revelation since signing with the Patriots as an undrafted free agent in 2018, and continued his ascent with two more interceptions in New England's victory over the Panthers, including an 88-yard pick six. He now has 22 career interceptions in three-and-a-half seasons. 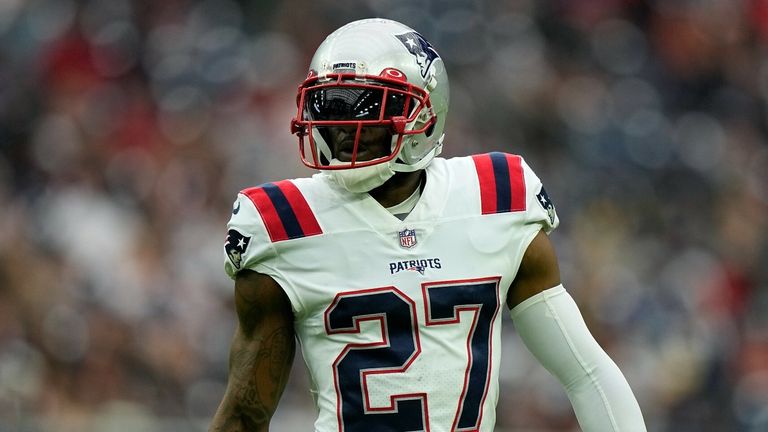 And what a time to be alive for back-up quarterbacks! In the absence of Kyler Murray, veteran play-caller Colt McCoy went 22-of-26 for 249 yards and a touchdown as the Cardinals out-played the 49ers in a 31-17 win, with Markus Golden logging three sacks and the NFL's touchdown leader James Conner feasting on three touchdowns (two rushing, one receiving).

A nod, too, to Chiefs defensive coordinator Steve Spagnuolo after he spotted and gratefully accepted a perfect opportunity to install some confidence back in his struggling unit with a blitz-fest against a nervy Jordan Love in Kansas City's win over the Packers.

Time is running out for Sam Darnold, both in Carolina and perhaps even as an NFL starter.

The rut continued for the Panthers quarterback as he was dealt a belated Halloween nightmare by Bill Belichick, finishing 16-of-33 passing (48.5 per cent - not even his season-worst), for 172 yards and three interceptions with a passer rating of 26.3 in Carolina's loss to the Patriots. Woof.

It's brutal on Darnold, harsh on a talent-filled Panthers team that plays fierce without reward, and probably leaves head coach Matt Rhule and general manager Scott Fitterer plotting a change under center come the offseason. You would be surprised if they did not have at least one eye on last Saturday's college quarterback duel between Liberty's Malik Willis and Ole Miss' Matt Corral.

Right now, things cannot get any worse with PJ Walker back there.

NO HENRY? NO PROBLEM Pre-game build-up scrutinised how significant a loss an injured Derrick Henry would prove to be as the undisputed focal point of the Titans' offense - his influence on a par with that of a quarterback in the eyes of some - in addition to a juggernaut Rams team that continued to make draft picks untrendy by pulling off a blockbuster trade for Miller, who was made to wait for his debut due to an ankle injury.

One team garnered 'season might be over' talk, while another set itself up for 'Super Bowl or bust' chatter. Of course, Sunday Night Football threw both narratives out the window in disgust.

Tennessee have become something of a giantslayer this season, following up wins over the Bills and Chiefs by beating the Rams for their fifth straight victory.

Adrian Peterson ran in for a touchdown on debut having only arrived earlier this week, while Matthew Stafford was intercepted on back-to-back plays, including a Kevin Byard pick six. For the shower of praise the Rams' defense had been subject to all week, it was an often-bemoaned Titans unit that starred as Jeffery Simmons recorded three sacks, four QB hits, three tackles for loss alongside Denico Autry's 1.5 sacks, one tackle for loss, one pass defense, three QB hits. Browns cornerback Greedy Williams left with a shoulder injury against the Bengals, for whom safety Brandon Wilson picked up a left knee injury and linebacker Akeem Davis-Gaither a left foot injury. 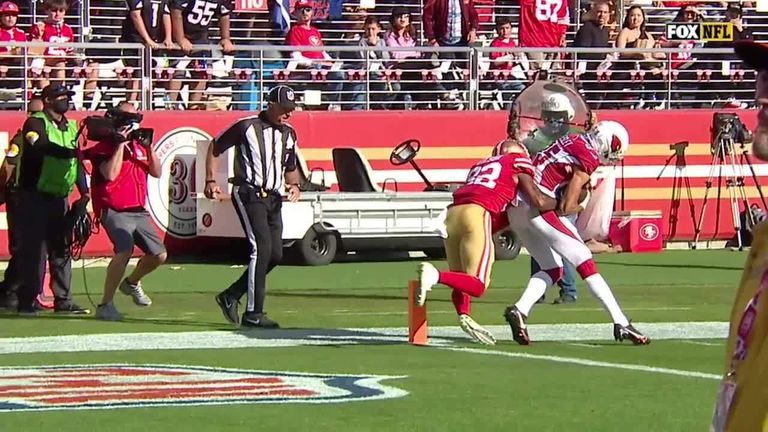 The Jaguars were dealt a scare when No 1 overall pick quarterback Trevor Lawrence exited the first half of Jacksonville's win over the Bills with a low ankle sprain before returning to the game. Left tackle Cam Robinson was ruled out with a back problem, while Buffalo lost safety Jaquan Johnson (hamstring), defensive back Taron Johnson (concussion) and running back Zack Moss (concussion). 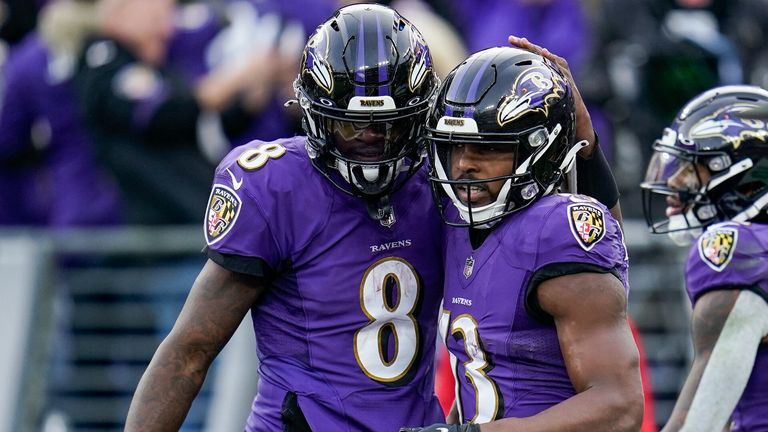 Saints defensive back Chauncey Gardner-Johnson was forced off with a foot injury against the Falcons, and the Dolphins finished without center Greg Mancz (ankle) and tight end Durham Smythe (eye).

Packers rookie cornerback Eric Stokes (knee) and defensive lineman Kenny Clark (back) were ruled out in their loss to the Chiefs, as was offensive tackle Mike McGlinchey (knee) for the 49ers against the Cardinals.