Sky Sports' Neil Reynolds has the final word on Week 11 in the NFL; join Neil and guests for Inside the Huddle, every Tuesday at 9pm on Sky Sports NFL as they look back on the best of the weekend's action...

Another NFL week is in the books and there were more surprises thrown our way as the Houston Texans, on an eight-game losing streak, upended the Tennessee Titans fresh from wining six straight; the Minnesota Viking sneaked past the Green Bay Packers and the Indianapolis Colts absolutely hammered the Buffalo Bills.

The only thing predictable about the NFL this season is me writing on a weekly basis about how unpredictable this league has become. Here are a few things that caught my eye in Week 11...

With all of the league's leading quarterbacks taking turns to blow hot and cold, why not Jonathan Taylor for the NFL's Most Valuable Player prize this season? The second-year running back's value to the Indianapolis Colts was obvious during Sunday's 41-15 win over the Bills.

Taylor ended a career day in the rain with 204 scrimmage yards (185 rushing) and five touchdowns. He ran with patience, vision and explosive power; all Colts quarterback Carson Wentz had to do was stay out of the way and not make any mistakes.

JT has been the driving force in the Colts winning five of their last six. And his outstanding form stretches back further; Sunday saw him tie an NFL record as he gained 100 scrimmage yards and rushed for a touchdown for the eighth game in a row - matching the achievements of Hall of Famer LaDainian Tomlinson in his NFL MVP season of 2006.

The Dallas Cowboys headed into Arrowhead Stadium to face the Kansas City Chiefs averaging 433.9 yards and 31.6 points per game. They left without scoring a touchdown in a surprisingly low-scoring 19-9 loss. 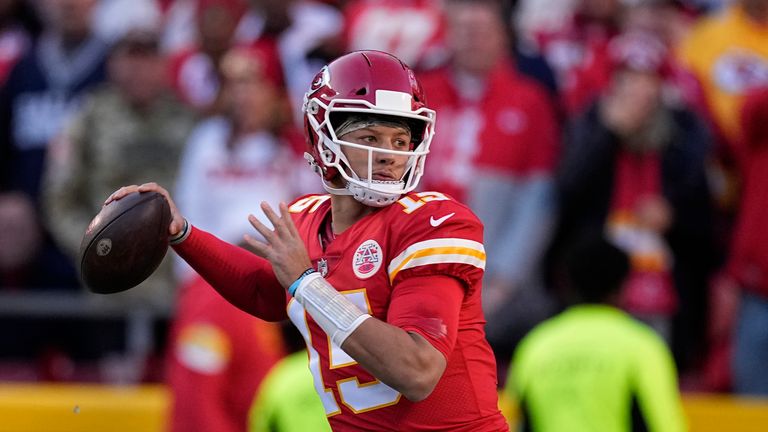 The Cowboys were stifled from start to finish by a ferocious and fired up Kansas City defense that is heading in the right direction at exactly the right time of the year. The Chiefs sacked Prescott five times, with Chris Jones leading the way with three-and-a-half takedowns. They also picked off the MVP-chasing quarterback twice, held the Cowboys to just 82 rushing yards and flew to the football to break up multiple passes downfield.

Week 11 was a continuation of steady improvement for a defense that was much-maligned earlier this season. Over the past four games - all wins - defensive coordinator Steve Spagnuolo's group have given up just 11.8 points per game and held every opponent under 20 points. Kansas City were giving up an average of 29 points per game during the first seven weeks of the season. Now we need to see if that defensive form holds when it really matters.

For the third week in a row, the Arizona Cardinals were sent into action without their two biggest offensive weapons - quarterback Kyler Murray and wide receiver DeAndre Hopkins. But they have found a way to remain the league's leading team, with nine wins and just two losses.

Several players have stepped to the fore as Arizona have won a respectable two out of three without their star performers. Colt McCoy is moving around like he is 25 and not 35 and played very well at quarterback in Sunday's 23-13 win over the Seattle Seahawks, throwing for 328 yards and two touchdowns.

Zach Ertz has settled very nicely at tight end after his midseason trade from the Philadelphia Eagles, James Conner is a scoring machine with 13 touchdowns on the year, and the defense - led by pass-rushing demon Chandler Jones - is playing very well, sacking Russell Wilson four times and holding the future Hall of Famer without a touchdown pass.

One final note on the Cards: here is a statistic that I think speaks volumes about their mental toughness and character... they have won a perfect six out of six on the road this season.

The Vikings are 5-5 and have dragged themselves back into the NFC playoff picture with back-to-back wins over two good teams in the Los Angeles Chargers and now the Packers. Sunday's 34-31 win over the Cheeseheads would have been especially pleasing for the Vikings and their fans.

Over the past fortnight, Minnesota's big offensive stars have driven the mini turnaround. Quarterback Kirk Cousins has thrown for 635 yards, five touchdowns and no interceptions. Running back Dalvin Cook has amassed 233 scrimmage yards and scored two TDs, while wide receiver Adam Thielen has 13 receptions for 147 yards and a score.

But the biggest star of the lot has been second-year receiver Justin Jefferson, who made big play after big play against the Packers on Sunday. Over the past two games, Jefferson has caught 17 passes for 312 yards and two touchdowns.

5) Running into the playoff picture

Also back in the crowded NFC playoff race are the San Francisco 49ers (5-5) and the Eagles (5-6). Both teams are putting a serious emphasis on running the football. One is doing so to limit the impact of their quarterback, while the other is adopting that approach to maximise its quarterback.

The 49ers have taken the ball out of the hands of quarterback Jimmy Garoppolo. During Sunday's 30-10 beatdown of the Jacksonville Jaguars, the Niners ran the ball 42 times for 171 yards and one touchdown. It was their second-straight game with more than 40 rushes - and a second-straight victory. The approach seemed to suit Jimmy G as he completed 16 of 22 passes for 176 yards and two touchdowns.

The Eagles are really rolling with their running game. Philly ran the ball 50 times for 242 yards and three scores in a 40-29 win over the New Orleans Saints. Jalen Hurts put up relatively pedestrian numbers as a thrower (147 yards, no touchdowns, no picks) but was unstoppable on the ground as he carried 18 times for 69 yards and three touchdowns. He is the NFL's best running quarterback outside of Lamar Jackson.

The Eagles have now topped 200 yards rushing in three games this season - and in each of those contests they have not had a 100-yard rusher, pointing to the strength in depth in the backfield. Philly have averaged 217.5 rushing yards per game in the past month.

I've already spoken about Taylor, so let's give a nod to Chargers second-year quarterback Justin Herbert. He was sensational throughout a 41-37 Sunday Night Football victory over the Pittsburgh Steelers, especially when staring down adversity late in a thriller at SoFi. Through his powerful arm and athletic legs (he threw for 382 yards and three scores, while rushing for 90 yards), Herbert built a 27-10 lead late in the third quarter, and the Chargers still led 34-20 midway through the fourth. But with the help of a blocked punt and a tipped interception, the Steelers fought back to lead 37-34 with three minutes and 24 seconds remaining. Herbert didn't even blink and he needed little more than a minute to deliver the victory, firing a 53-yard touchdown strike to Mike Williams - it was exactly what this true L.A. superstar deserved. There were some great touchdowns in Week 11, but I want to praise Colts cornerback Kenny Moore - who has previous for pulling off tremendous interceptions - for his clear head and quick thinking during his team's thrashing of the Bills.

Trailing 31-7, Buffalo quarterback Josh Allen attempted to force a pass to Emmanuel Sanders. It was broken up by Xavier Rhodes and the ball hung in the air between the cornerback and the wide receiver. Moore split the opponents, tapped the ball away from Sanders and caught the pass for one of the more memorable interceptions of his career. To have that ability to think clearly in the heat of battle and then to pull it off, is mightily impressive indeed.

Coach of the Week: David Culley

Few gave the Texans much chance of winning in Week 11, myself included! David Culley's team had lost eight in a row since winning in Week One and were taking on a Tennessee squad that had won six straight.

When introducing that game on Sky Sports on Sunday night, a slip of the tongue saw me hand the Titans seven wins in a row. Sub-consciously I was giving them the win before the game was even played. That's fool-hardy at the best of times, but especially in this season.

The Texans played hard from start to finish, led by an inspired defense that intercepted Ryan Tannehill four times and sacked him twice. I also saw Houston quarterback Tyrod Taylor putting his body on the line with his two touchdown runs. It was only one game and the Texans are not talented enough to go on any kind of run, but that victory showed me that they are still listening to and fighting for Culley.

The Cleveland Browns won on Sunday, but it was an ugly 13-10 home win over the still winless Detroit Lions. Baker Mayfield was poor during the game, throwing for just 176 yards, one touchdown and two interceptions. He was even poorer off the field.

Baker made a quick exit from the field and later had this to say about Browns fans who booed him in the second half: "Those are probably the same fans that won't be quiet while we're on offense and trying to operate. So, don't really care."

That's not a good look and it is indicative of the pressure building on Mayfield. The Browns have played below expectations in 2021, the quarterback is more banged up than he has ever been and hanging over all of this drama is the fact that Baker does not have a lucrative contract extension offer on the table from the Browns. This one is worth monitoring the rest of the way.