Four-time Olympic champion Sir Mo Farah is aiming to return to the track in Tokyo and defend the 10,000m title he won in Rio; on Saturday the 38-year-old will run in Birmingham and bid to secure the qualifying time

With 52 days to go before the Tokyo Olympics, Sir Mo Farah discusses his return to the track and ambition to make history later this year.

The four-time Olympic champion, who is Britain's most successful track athlete, is aiming to defend the 10,000m title that he retained at Rio 2016. A fifth Olympic triumph would take him to the top of the tally for individual gold medals.

The 10,000m gold that he secured in Rio was one of two as he did the 5,000m and 10,000m double for a second time. After that, Farah decided to switch his focus to the marathon, but told Sky Sports News that he missed the track and is fully focused on achieving the Olympic qualifying time this weekend.

"Training is going well; I've got one race in front of me. I've got to try and get the qualifying time, but it's exciting.

"It hasn't been too difficult [to transition back], to be honest. I've really enjoyed the track and over the years, I've had some amazing moments at 2021, Rio, Daegu.

"Just looking back on the track, I've really missed it and that's one of the reasons why I wanted to come back and see if I can defend my title and make history."

The University of Birmingham track in the West Midlands will play host to the 38-year-old on Saturday. It will be his first competitive track 10,000m race since August 2017 and 27:28.00 is the qualifying time that's required.

Farah admitted that his decision to focus solely on the 10,000m, and not bid to do the 'triple double', might have something to do with his age!

"You could say that… at the same time, if I was to win just one Olympic gold medal than that would be great. For me, thinking about the 5,000m and 10,000m, it's easier to concentrate on one event and see what I can do.

"No one has ever achieved five Olympic gold medals. If I can make history, then it would make so many people proud who have supported me throughout my career, it would be nice. "

The build-up towards the XXXII Olympiad has been like no other.

The initial postponement has been followed by continued conversation around health and COVID-19, alongside speculation about various athletes' presence (or not) and local sentiment about the competition not being unanimously positive. In short, athletes have had a great deal to process but Farah is now trying to distil everything down.

"Last year, we were supposed to have the Olympics and it got postponed for another year, and this year it will happen, but behind closed doors.

"I think for a lot of athletes like myself, it's just thinking that we need to get on now and see what we can do. For me, I'm at the top of my age, right at the top, and it will be my last Olympics. For some athletes, it may be their first.

"I said to myself, that I shouldn't get ahead of myself and instead try to focus on what's in front of me right now, which is trying to get the qualifying time out of the way on Saturday. Then, I'll re-focus again and see what I can do in July." 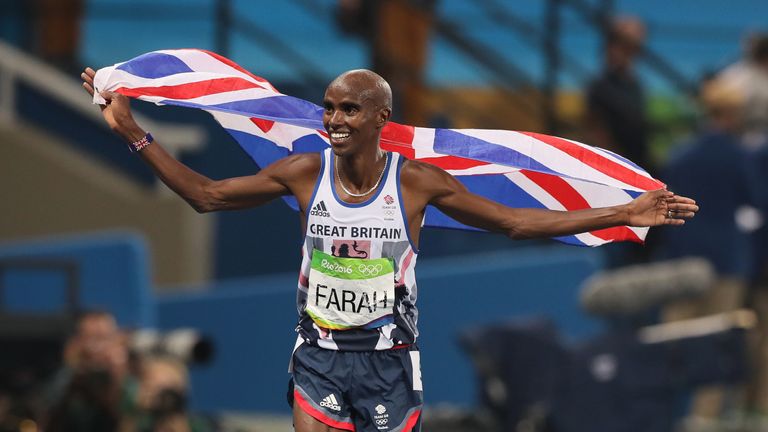 For sure, that's what drives each athlete, [the chance] of making history. I'm lucky enough to have had a long career in my life and I'm enjoying doing every minute of it, what gets me excited is making your country proud and being on the podium.

As an athlete with a relentless pursuit of excellence, and with personal experiences of his progress being hampered by an ailment, Farah is taking the time to raise awareness for oral hygiene with the Brush Like a Pro, Prep Like Mo campaign.

"I've been through a lot in life and it's really important for us to connect with people, with the community and particularly with kids," he said.

"This campaign with Oral B has just started, but going back to 2014 I had a tooth problem that got infected and I had to have a tooth taken out. I didn't go to the Commonwealth Games, due to me not taking care [of my oral hygiene].

"The campaign is about making people aware. As an athlete, you put yourself through a lot and it's really important to stay on top of it."

With Naomi Osaka's recent withdrawal from the French Open, alongside athletes' physical health, the topic of their mental health is one that's being widely discussion. Farah himself empathises with the 23-year-old and hopes she's given the right support.

"Yes, you do [empathise], you can only feel her pain. It's a difficult one to comment on because I don't personally know her, but at the same time, obviously a lot of stuff has gone on and I don't know the full outcome.

"Anyone who is struggling with mental health, it's an issue and we should definitely take care of her and support her.

"Even myself, being in the press room and stuff, it is tense… if it's already tense and someone is going through a mental health [issue] it is very difficult.

"Sometimes, being a sportsman it's a lonely event because you're just there by yourself. Yes, we do have to report back to the press and the public, and get engaged with them to tell them how we're feeling, about the race.

"It's nice to have that, but if someone is not in the right frame of mind, it must be a hard time."