Great Britain's Bianca Walkden took bronze in the women's +67kg taekwondo at the Tokyo Olympics with a 7-3 victory over Poland's Aleksandra Kowalczuk.

Bianca Walkden became the latest British taekwondo star to suffer final-second agony as she was forced to settle for her second consecutive Olympic bronze medal at the Makuhari Hall in Tokyo.

The three-time world champion led South Korea's Dabin Lee by two points in their semi-final but a three-point head-kick right on the button gave her opponent a 25-24 win and sent Walkden into the repechage.

Just as she had rallied in Rio five years ago, Walkden showed admirable resolve to overcome Aleksandra Kowalczuk of Poland 7-3 and ensure a place on the podium, but it will scarcely ease her pain at coming up just short on the biggest
stage.

Fully in control throughout the contest. 🥉

She said: "I'm glad I came away with an Olympic medal but it was not the colour I trained for or expected. I gave my heart and soul in that semi and was a little bit unlucky with some of the decisions.

"I wanted to come out and be a true champion like I train for every day, I wanted to stand there with my head held high and fight no matter what.

"I feel a little bit dead inside and it's killing me. It's a medal, just not the colour I wanted. I might paint over it when I get it home, no-one has to know.

"I didn't want to run around with the flag afterwards but I wanted to say 'thank you' to coach, the physio and all the people involved. It was really hard to do but it was for my friends and all my family. Deep down I was dying to cry."

Walkden's defeat echoed Lutalo Muhammad's last-second loss in his gold medal match in Rio in 2016, and swiftly followed defeats for team-mates Bradly Sinden and Lauren Williams, both of whom had to settle for silvers after seeing leads overturned late on.

But whilst Sinden and Williams will be able to reflect on highly successful campaigns, missing out on gold again will represent a crushing blow for Walkden, who has largely dominated her +67kg category for the best part of a decade.

She said: "I'll be proud when I get a gold, (Paris 2024) is only three years away. I'm not that far off, I'm a three-time world champion, three-time European champion, I'm world number one and I've got two Olympic medals, anyone else would die for that and I need to remember that."

She had started with an efficient 17-7 win over Cansel Deniz of Kazakhstan but faced a tough test against Lee, like Walkden a reigning world champion but in the higher, non-Olympic 73kg category. 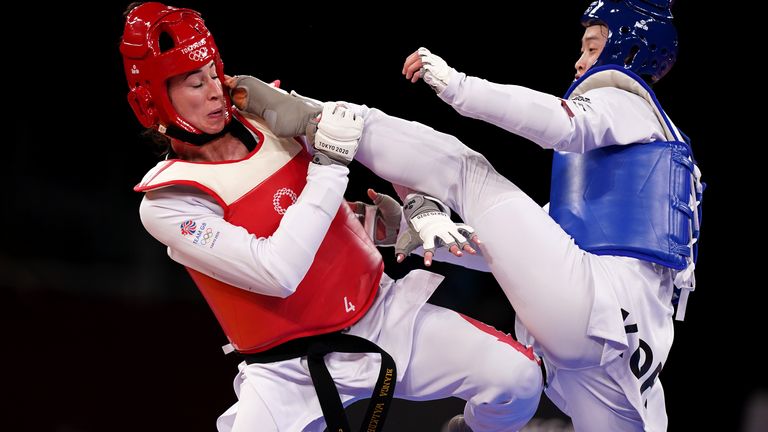 Walkden struggled to take control of the contest despite erasing a 3-1 deficit at the end of the first round and heading into the final three minutes locked together at 10-10 with her opponent.

A two-point body kick gave Walkden a brief lead and she went back in front with 10 seconds remaining. As Sinden and Williams had already underscored, 10 seconds is an awful long time in taekwondo.

After mulling over her near-miss for the best part of four hours, Walkden returned to see off her Polish opponent, pulling away in the final round of a tightly-contested bout with a body-kick giving her what turned out to be an unassailable advantage.

She said: "The last few hours have been hard, they tried to pick me up and said I've have more regret not going for it. Now I can cry and let it all out but I had to hold it in as much as I could and just be professional."

After Jade Jones' shock defeat on Sunday, it left Great Britain's taekwondo team with a final tally of two silver medals and one bronze - with the knowledge that but for the clock it might have been so much better.

Visit skysports.com or the Sky Sports App for all the breaking sports news headlines. You can receive push notifications from the Sky Sports app for the latest news from your favourite sports and you can also follow @SkySportsNews on Twitter to get the latest updates.