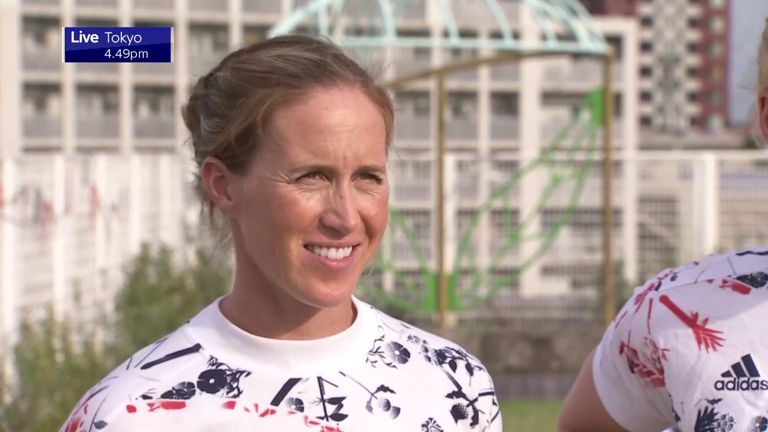 Comeback rower Helen Glover said she was proud to finish fourth with Polly Swann in the Olympic women's pair final and eager to return home to see her children.

Glover, the dual Olympic champion chasing glory at a third straight Games after almost four years off to start a family, could not quite claim another medal as she and Swann trailed in winners New Zealand, the Russian Olympic Committee and third-placed Canada.

While the 35-year-old - who became the first mum to row for Britain at an Olympics - missed another chance at a medal, she said she was proud with her efforts.

The mother of three tweeted: "SO proud to make the Olympic final & come home with 4th. Polly Swann has been the most incredible teammate and you've all been amazing support.

Thank you for your support and messages 🙏🏻 SO proud to make the Olympic final & come home with 4th. @PollySwann has been the most incredible teammate and you’ve all been amazing support. Thank you!! Now can we invent a teleport machine to get me straight home to the little ones?? pic.twitter.com/JHe7TZBOnK

"Thank you!! Now can we invent a teleport machine to get me straight home to the little ones??"

Since winning second gold in Rio @Helenglovergb has

Had 3 children
Returned to rowing
Won a European Championship
Done the nation proud in her 3rd Olympics #TeamGB pic.twitter.com/zcZp2CWuQE

Glover told reporters she and Swann had given their all but were left with a mix of pride and frustration.

"The reward is knowing we crossed the line giving it our all, the frustration will be coming away thinking we had more and we didn't," she said.

"Had it been a flat water day we would have expected to come through for that last place but it wasn't.

"It was very hard to challenge in the final sprint but we still tried."

Glover also sent an emotional message to her children. She and her husband, broadcaster and adventurer Steve Backshall, are parents to three-year-old Logan and one-year-old twins Kit and Willow.

She said: "They're sometimes up at this time in the morning so they might be watching now.

"I love them so much, they've been my inspiration. I never saw myself getting back in a rowing boat until they came along. You can do anything you want to do.

"Trying and failing is not a problem, as long as you try. All the parents who have supported me on the way, thank you for your messages."

UK Sport praised Glover and 33-year-old Swann, who has mixed training with working as an NHS doctor during the coronavirus pandemic - saying both were inspirations.

"Helen Glover makes history as the first mum to row for Team GB with Polly Swann who juggled training with working as an NHS junior doctor during the pandemic," the organisation tweeted.

"Neither woman needs a medal to prove they are superhuman and inspire the world."

Great Britain's run of five successive Olympic golds in the men's four came to an end before a surprise silver in the quadruple sculls lifted spirits for British Rowing.

Backshall said he was lost for words after the race, deferring to former champion rower Matthew Pinsent for his expert view.

"I don't know what to say, but Matt (as usual) kind of sums it up," Backshall tweeted.

Pinsent said Glover and Swann "did well not to get drawn to go too fast early" and then "laid everything on the line to try to get back".

"Sport can be brutal at times. And 4th is amazing and tough to take at once," Pinsent tweeted.

Swann said: "I think we always knew in the Olympic final people were going to go out hard.

"We thought we might have a bit more of a buffer but it wasn't to be."

Agonisingly close for Emily Craig and Imogen Grant to finish fourth by 0.01 of a second#TeamGB pic.twitter.com/YNeNutAdnU

Meanwhile, there was more rowing heartache for Britain in the women's lightweight double sculls, with Emily Craig and Imogen Grant missing a bronze medal by just 0.01 seconds.

In an incredible finish, the top four were separated by just half a second, with Italy taking gold from France and Holland.

Elsewhere, Britain's women began their rugby sevens campaign with a 14-12 victory over the Russian Olympic Committee team, thanks to a last-gasp try from co-captain Abbie Brown.

And there was joy for Ireland in rowing, with Fintan McCarthy and Paul O'Donovan earning the country's first gold medal of these games in the men's lightweight double sculls, overhauling Germany to win by less than a second.