ParalympicsGB duo Lauren Rowles and Jude Hamer share the story of how their relationship began, as the annual Rainbow Laces campaign activation continues, supported by Sky Sports as a member of TeamPride 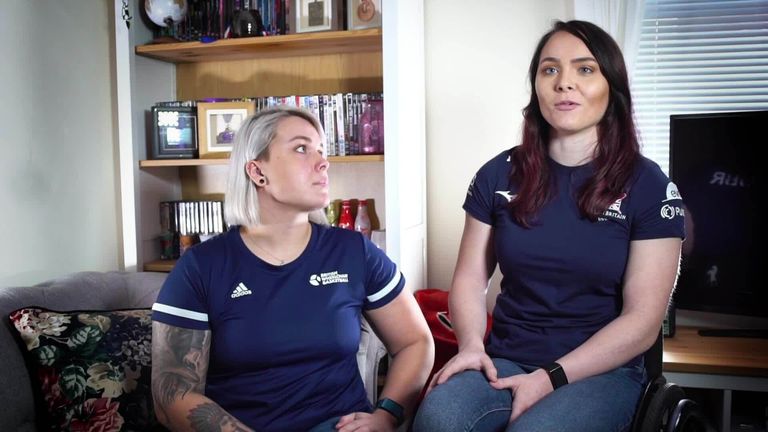 Lauren Rowles and Jude Hamer were both adapting to the pandemic-forced postponement of the Tokyo Paralympics when their chats on social media began to gather pace.

Rowles, who struck gold in the mixed sculls at Rio 2016, and wheelchair basketball international Hamer became good friends through a shared passion for CrossFit, as well as being ParalympicsGB colleagues.

"Over lockdown, we got talking," says Rowles. "Jude was buying a rabbit at the time - she sent me a photo and used it as her gateway to slide into my DMs!"

They have now been together as a couple for six months, and with each having at one stage faced the prospect of training alone as they continued to prepare for the rescheduled Games, they have been able to inspire each other instead.

Speaking to Sky Sports News' Mark McAdam to mark the annual activation of Stonewall's Rainbow Laces campaign for LGBT+ inclusion in sport, Hamer and Rowles explain how the damaging effect of lockdown on their social lives was hard to take.

However, their blossoming relationship has brought happiness and hope. "We clicked really well," says Hamer. "We've been inseparable really since the first day we met."

Rowles adds: "People were grasping onto the fact that we were spending more time together. They've all been really supportive.

"I've only recently come out as being gay and that's been really well received by my team-mates."

Proudly wearing pairs of Rainbow Laces - with Hamer sporting one of the new designs, in the bisexual Pride flag colours - they are huge advocates for representation, in all aspects of their lives.

"It's really important whether you have a disability or you're gay or whatever it may be, for you to see that," says Rowles. "It could be people in the media, in your local street, or in the shops you go to. When I grew up, I didn't know anyone with a disability."

Hamer says there are still challenges but over time, her confidence has grown. "I get more upset when it's adults staring," she explains. "I've had that a lot where someone's walking past us and staring the whole time.

Rowles echoes her girlfriend's belief in the power of authenticity. "I realise you are inspiring a whole generation of kids or even adults.

"Whether it's disability or sexuality, through seeing other people and it socially being accepted, they've found the confidence to go on and live their life."