Castleford 16-6 Catalans: Dragons continue to impress with win at Castleford

Tries from Fouad Yaha, Samisoni Langi and Mathieu Laguerre saw the Dragons beat the Tigers for the first time in nine years 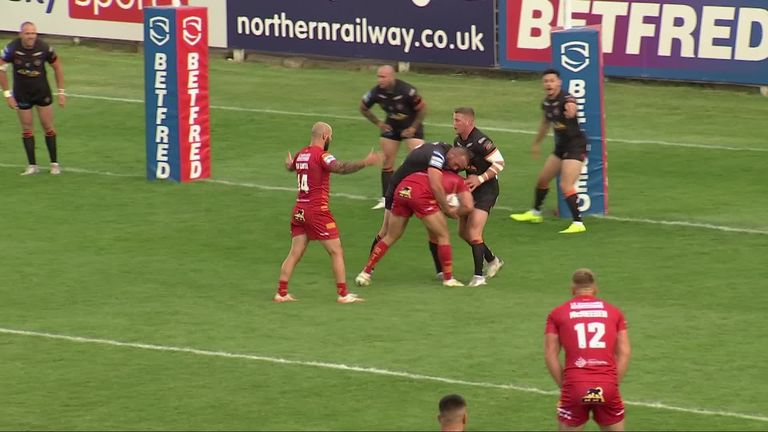 League leaders Catalans Dragons maintained their best ever start to a Super League season with a first win at the Mend-A-Hose Jungle for nine years.

The French side, even without England duo Sam Tomkins and Tom Davies, dominated for much of the match as they defeated Challenge Cup finalists Castleford 16-6 to extend their winning run to six matches.

The Tigers have now lost five of their last six in the league but were once again well below strength and had youngsters Brad Graham and Sam Hall making only their second appearances for the club.

Castleford had Paul McShane on England duty and Peter Mata'utia and Suaia Matagi away with the All Stars and, with Jake Trueman and Gareth O'Brien still injured, coach Daryl Powell opted to start with prop Liam Watts at stand-off.

Watts battled manfully in trying circumstances but the home side struggled for creativity and were trailing 14-0 when winger Derrell Olpherts scored their only try four minutes from the end.

The Catalans were led superbly by prop Julian Bousquet in the absence of injured skipper Benjamin Garcia and it looked routine for them when Josh Drinkwater's cut-out pass gave left winger Fouad Yaha a run-in at the corner for the game's first try on seven minutes.

Catalans coach Steve McNamara was forced to re-jig his team when hooker Alrix Da Costa went off with a bleeding nose on 16 minutes but they coped admirably with the changes.

Maloney looked assured at the back and moving Langi into the thick of the action paid off midway through the first half when he pounced on a Tigers handling error to score his side's second try.

Although Maloney failed with both conversion attempts, the Dragons continued to look the more creative side.

Whitley swooped on a handling error by Olpherts to give Drinkwater a clear run to the line but he dropped the pass and Mourgue had a try disallowed for a forward pass as it remained at 8-0 at the interval.

Castleford's defence kept them in the game and they had to scramble early in the second half to bundle winger Mathieu Laguerre into touch after former Tigers second rower Mike McMeeken had gone close.

Towering prop Sam Kasiano caused all sorts of problems for the home side with his array of ball-handling skills as the French side piled on the pressure.

Yaha had a try disallowed but there was no stopping Laguerre on the other flank when he gathered in another of Drinkwater's passes over the top and this time Maloney kicked the touchline conversion to stretch the lead to 14-0.

Drinkwater kept his side on the front foot with a 40-20 kick but the only addition to their score was a late penalty from Maloney, while Olpherts scored a consolation try for Castleford which Danny Richardson converted.