Highlights from the Betfred Super League clash between Castleford Tigers and Hull KR.

Jordan Abdull barged over in injury time to claim a dramatic victory for Hull KR over Castleford and puncture the festive atmosphere at the Mend-a-Hose Jungle.

A restricted crowd of 3,600 mostly home fans relished their return for the first time in over a year but they watched Abdull's 10-point haul claim a surprise if richly deserved 26-22 Betfred Super League win.

Daryl Powell's men blew an early 14-point lead as well as an eight-point half-time advantage with their only points in a dismal second-half display coming from a Danny Richardson penalty.

"I thought they dominated us physically in the first half - they were just way too quick for us and we gave away too many penalties," Hull KR head coach Tony Smith said.

"So we weren't on the front foot but having said that we still felt confident of bringing it home and I thought we were very good in the second half.

"We certainly need to improve in a few areas - some of our defending wasn't good enough again but it doesn't mean we roll over and get our belly scratched - we dig in and we keep on fighting."

The marginal differences between the sides had been emphasised in the Tigers' golden-point Challenge Cup win earlier this season, and made it a fine fixture to herald the return of fans for the first time since last March. 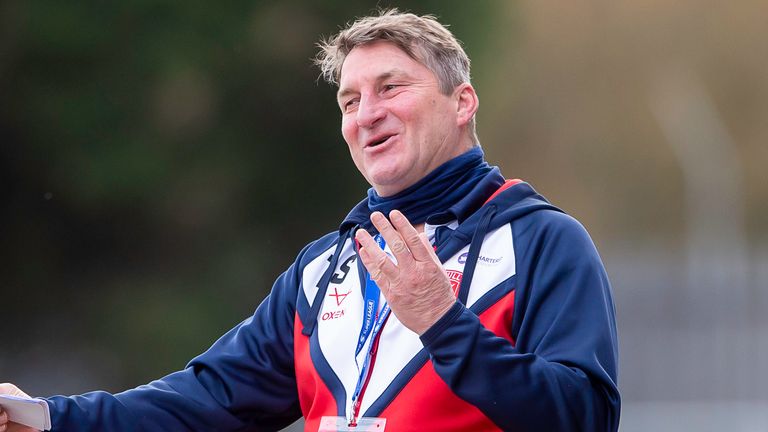 Some of our defending wasn't good enough again but it doesn't mean we roll over and get our belly scratched - we dig in and we keep on fighting.

Castleford looked set to make the most of the occasion as they eased into a 14-0 lead inside the first quarter of an hour, thanks to tries from James Clare and Michael Shenton, and six points from the boot of Richardson.

But even in the early stages Rovers had fired a warning of what was to come as they were held at bay by some resolute defending, before Ben Crooks got his side on the scoresheet after a neat assist from Brad Takairangi.

Matt Parcell evaded Jordan Turner to squirt over in the left corner just before the half-hour mark, with Abdull's second conversion narrowing the home side's lead to just two points.

The hosts may have hoped a gruelling night would be averted when Derrell Olpherts wriggled his way over on the right touchline with Richardson's conversion establishing an eight-point advantage at half-time.

But Rovers' resolute forward line reaped rewards early in the second half when the impressive Ryan Hall capped a sustained spell of pressure by barging over the line after being teed up by Adam Quinlan.

And shortly before the hour mark Crooks erased the remaining deficit by touching down acrobatically in the corner, although Abdull's second consecutive missed kick prevented his side nudging in front for the first time.

For all their delight to be back, there was evident frustration among the home fans as, despite another Richardson penalty restoring their lead at 22-20, Rovers were beginning to look the more likely winners.

Jez Litten was held up over the line, before further pressure yielded its almost inevitable result when Abdull went over on the right, finally nudging his side in front for the first time, and kicking the conversion for good measure.

"We were eight points in front at half-time and we came out and played so far away from a team that has got any control about it that it's untrue," Castleford head coach Powell said.

"We did some ridiculous things at times that players at this level really shouldn't do. There needs to be an honest discussion and then we have to move on. It's a short turnaround to our next game and we need to be a lot better than that."