French scored one try and set up two others as Wigan came from behind to win the derby clash with the Centurions at Leigh Sports Village on Monday night; Harry Smith, Dom Manfredi and Jake Bibby (2) also got tries for the Warriors 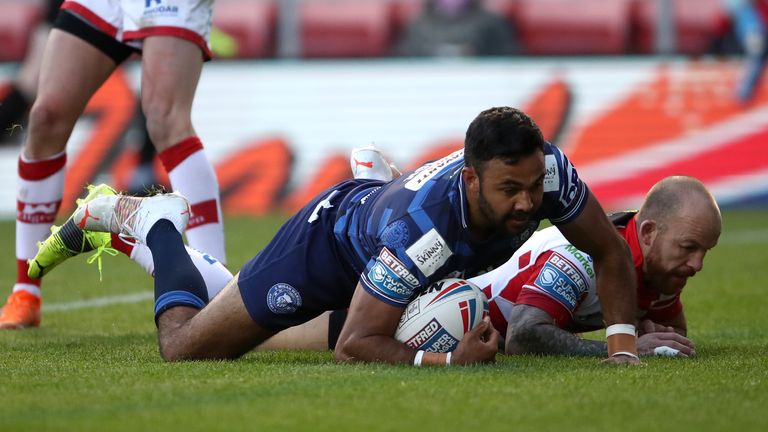 A masterclass from Bevan French helped Wigan Warriors maintain their perfect start to the Super League season as they fought back to see off Leigh Centurions 30-16.

French scored a try and set up two others as the Warriors notched their sixth straight victory of the season, while the Centurions have yet to win a game in 2021 and remain stuck at the bottom of the table.

For Leigh, Lewis Tierney returned to face his old team, with Matty Russell making way, while Wigan moved French back to full-back, with Zak Hardaker shifted to the left-wing. Mitch Clark was named on the bench, while Liam Farrell was moved from the centre back to the second row.

The home side started strongly, forcing a goal-line drop-out in their opening set and they took the lead in the 12th minute when former Wigan centre Anthony Gelling dived over in the corner. Ben Reynolds was unable to convert the try, but Leigh continued their solid start by forcing another goal-line drop-out.

Midway through the first half, the Centurions crossed over for their second try courtesy of a barging run from prop Nathan Mason. Reynolds made no mistake this time from right in front of the posts to push the lead to 10-0.

The Warriors responded when French was held up over the try-line and they pushed for a score but Leigh's impressive defence kept them at bay. Then in the 26th minute, a brilliant grubber from French was snapped up by Harry Smith to score, and Smith converted his own try to reduce the deficit even more.

Wigan were almost in again straight after but French's pass to Dom Manfredi was ruled forward. Moments later though, the visitors tried the same play and this time it worked as Manfredi dived over in the corner to level the scores nine minutes before the break as Smith's conversion from the sideline was wayward.

The Warriors were dominating at this point and searching for another try and they finally took the lead as Jackson Hastings found French on an inside ball and the full-back stepped his way over.

Smith added the extras to make it 16-10 but - with seconds left in the half - Ryan Brierley put through a perfect kick for Jamie Ellis to scoop up and reply for the hosts. Reynolds also nailed his conversion to tie the scores 16-16 at the break.

In the second half, Wigan took the lead back after 47 minutes when Farrell touched down off Hastings' pass, and Smith made it 22-16 with his successful conversion.

The away side increased their advantage when Jake Bibby crossed on the left flank 10 minutes later, but Smith was unable to add the extras.

The contest was slipping from Leigh's grasp and soon Bibby was over again to complete his second-half brace.

Another smart pass from Hastings found the centre in the 60th minute and he crossed for his second.

Smith could not land his kick but the Warriors were comfortably 30-16 ahead, while Leigh failed to manufacture a response and continue their search for a maiden victory.

Leigh coach John Duffy rued his team's poor discipline :"The first half we were outstanding, we stuck to the plan well,"

"Then I just thought we were a bit ill-disciplined after half-time and we got beaten by a great side. We have to keep plugging away, we have to compete for longer periods. We've got to be better at training and have that continue into games for us.

"We are working hard - I've seen a big change for us in that week off. But we need to be smarter, coming out after half-time and giving a penalty in our first set - you just can't do it at this level."

Wigan coach Adrian Lam has praised his side's defence after they fought back to win.

"I thought the way we started was probably a little bit of a hangover from the Challenge Cup. It was a 10-day turnaround, there were a lot of errors and that part was of concern.

"But in the second half we held them to nil which is back to where we want to be."

Lam admitted the atmosphere at the Leigh Sports Village was impressive and believes it will be an asset for the Centurions.

"Whoever comes here, any Super League team for the rest of the year, it's going to be a real tough battle for them because the crowd gets right behind them," he said.

"It sounded like it was full at times. I can imagine them getting on a roll and it being a really tough day for teams.

"I'm glad we've come here and got the two points."