Castleford fans say they were asked not to wave rainbow flags; Catalans say rainbow flags are not banned at the stadium

The Dragons have been criticised for signing the former rugby union international who was sacked by Rugby Australia over anti-LGBT+ comments on social media.

Some Castleford supporters say security at the stadium asked them not to wave rainbow flags during the match. A Catalans spokesman said: "Rainbow flags are not banned at our club. It is not forbidden. We are gathering more information on what happened."

• Grey said security returned later: "We were then told it was against the views of the club for us to have the flags."

• A Catalans spokesperson told SSN: "Rainbow flags are not banned at our club. It is not forbidden. We are gathering more information on what happened."

• Super League - in conjunction Rugby Football League - said: "Everyone should have the right to respectfully express their views. We are investigating. We will receive a full report by the end of this weekend and have more details on Monday."

A joint statement from the Super League and RFL read: "Everyone should have the right to respectfully express their views. We are investigating. We will receive a full report by the end of this weekend and have more details on Monday."

But Folau, lining up at centre in place of the injured David Mead, put the controversy behind him to get Catalans' second try of the game in Perpignan when he leapt highest to catch a huge up-and-under and touch down.

The 30-year-old nearly repeated the trick as Catalans led 14-6, but he hit the ground just short of the try-line after claiming another high kick.

Folau played a part as Catalans went 24-12 ahead early in the second half too as he won a penalty when blocked off challenging for another high ball. The Dragons opted to run the ball and Sam Tomkins, who went on to complete a hat-trick, crossed the whitewash.

The world's media descended on Stade Gilbert Brutus for Folau's debut, and Catalans head coach Steve McNamara praised both the new signing and his entire squad for how they dealt with the attention on them.

"I have congratulated the team because it has been difficult," McNamara said. "To have journalists from all around the world descending on this region, chasing players around in cars and following people and all the other bits that go with it, the players have had to deal with that and credit to them.

"People are judging him on a headline, what they've seen on social media. When I sign a player I look at him from a football perspective then I work out what type of person he is. Is he a good person, is he a good player? Will he add value to the team on and off the field? 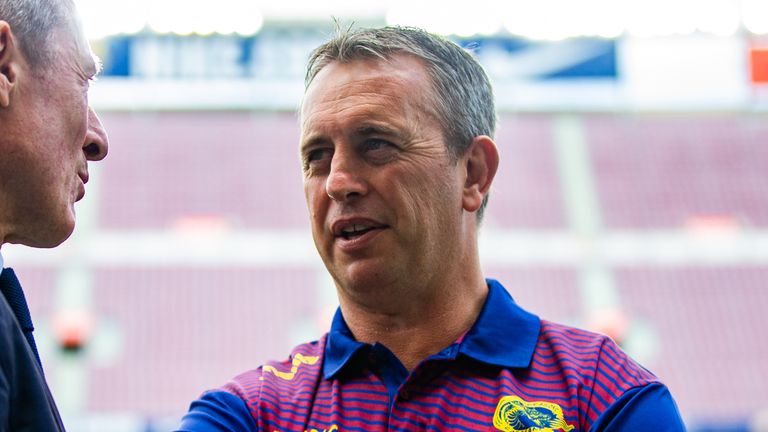 "I'm not judging him on any political or religious beliefs. We quite clearly do not believe in what he has said, we have made that clear in our club statement."

"I'm not judging him on any political or religious beliefs. We quite clearly do not believe in what he has said, we have made that clear in our club statement.

Any attempt by Castleford to steal the headlines were thwarted as early as the second minute when former NRL star James Maloney found a gap for Tomkins to stride under the posts.

Then Folau struck when he collected a high kick from Josh Drinkwater to touch down and Maloney's conversion made it 12-0 with just six minutes on the clock.

Tigers winger Derrell Olpherts hit back with an 80-metre dash from a clever in-goal collect and re-start by scrum-half Danny Richardson, who then converted Olpherts' try from in front of the posts.

A Maloney penalty in front of the posts after 24 minutes put the Dragons back on track and 10 minutes from half-time, Tomkins fielded a high kick 10 metres from his own line and found winger Fouad Yaha who raced 60 metres followed by releasing centre Samisoni Langi for a stunning try.

Catalans withstood early pressure from the visitors after the break with some solid defence and with Maloney marshalling the troops, Catalans capitalised on a penalty 20 metres out.

The ball was moved to the left where England international Tomkins twisted and turned over the line, Maloney scraping the post with his conversion to put the Dragons in the driving seat at 26-12.

Things got worse for Castleford when Olpherts was sin-binned for delaying a quick re-start from Tomkins and 12 men struggled to contain the Dragons, despite Richardson's best efforts.

When Tomkins released Langi, it was Yaha who again capitalised with an unconverted try out wide on the left.

Richardson's 40-metre dash up the middle of the pitch and pass to winger James Clare clawed back some points for the Tigers, with the scrum-half adding the conversion.

Boosted by the return of Olpherts from the sin-bin, Castleford were then able to make the most of a ball-spill by Benjamin Garcia and pressed hard on the Dragons line, yet could not find a way through some resolute defence.

An attempted drop-goal by Tomkins was wide of the mark but when Sam Kasiano returned to the fray from the interchange bench, Catalans pushed for the finish.

Man of the match Tomkins again was chief tormentor with a late try which bamboozled the Tigers defence and Maloney's conversion wrapped things up.