Catalans Dragons head coach Steve McNamara was up against son Ben, playing in the halves for Hull FC, for the first time; two tries from Tom Davies, plus scores from Fouad Yaha, Sam Tomkins and Julian Bousquet helped the league leaders return to winning ways 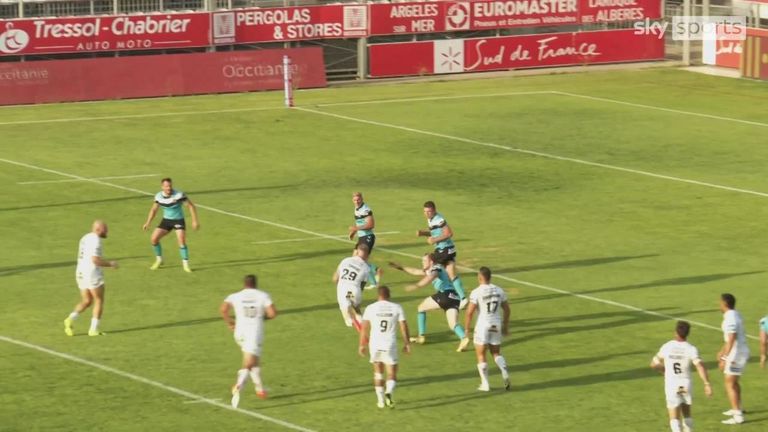 There were no favours from father to son as Catalans Dragons claimed a 31-16 Betfred Super League victory over Hull FC in Perpignan.

Catalans coach Steve McNamara came up against son Ben - in the halves for Hull - for the first time, but family allegiances were set aside as the Dragons strengthened their grip on top spot.

On-field temperatures of 38 degrees proved challenging for Hull's makeshift young side, but they stood their ground for the first 40 minutes and led 14-10 at half-time.

The younger McNamara threatened an upset with his accurate goal-kicking and composure with the ball, but a second-half comeback by the Dragons ruined his chances of claiming the family bragging rights.

Tom Davies was first to score for Catalans in the sixth minute as James Maloney and Dean Whare combined to put their winger over in the right corner, but Maloney hit the post with the conversion.

Catalans then seemed certain to score again before Sam Tomkins' pass was intercepted by Hull centre Carlos Tuimavave, who raced 90 metres to score, leaving McNamara to add the conversion and put Hull 6-4 in front.

Hull missed the chance to go further ahead when McNamara missed a penalty in the 24th minute, but he made amends two minutes later from the same spot as the Dragons were penalised for pushing at the play-the-ball.

Davies scored his second of the night in the right corner following good work from Tomkins and Whare, and this time Maloney was on target from the touchline to put the Dragons back in front at 10-8.

The introduction of giant prop Sam Kasiano from the bench on the half-hour mark seemed to put some fire in the Dragons' bellies and, when Tuimavave was sin-binned for a high tackle on Corentin Le Cam, Hull were under the pump.

However, second row Jordan Lane burst through the Catalans' defence to put winger Bureta Faraimo in on the right, McNamara adding a touchline conversion to give the visitors a four-point lead at the interval.

Winger Fouad Yaha levelled the scores four minutes after the break with a try in the left corner following a break by Tomkins and Samisoni Langi, and Maloney put Catalans ahead with the touchline conversion.

McNamara then levelled the scores again with a 58th-minute penalty, but Catalans turned up the heat, forcing Hull into a succession of goal-line drop-outs before Maloney landed a drop-goal to make it 17-16 with 12 minutes to go.

Tomkins put daylight between the teams a minute later when he climbed to steal the ball from Adam Swift and go over, Maloney's conversion making it 23-16.

French prop Julian Bousquet then wrapped things up with a short burst between the posts, Maloney adding the two points and a further penalty goal for a final scoreline of 31-16.