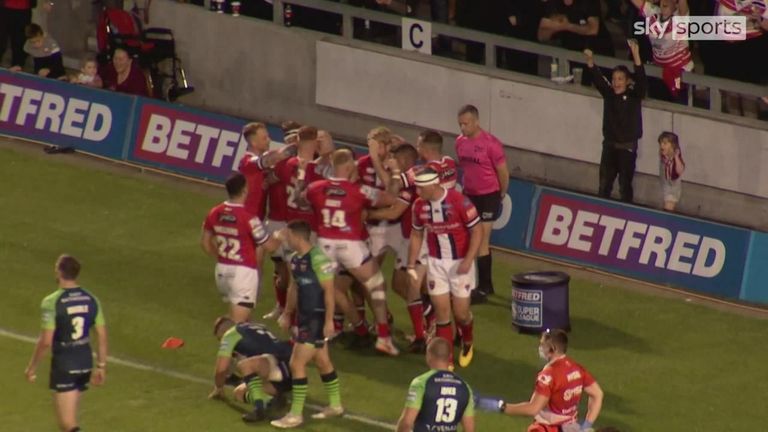 Salford Red Devils ensured there was no happy return for former coach Ian Watson as they completed the double over Huddersfield Giants with an 18-12 victory at the AJ Bell Stadium.

The rejuvenated Giants were on course for a fourth-consecutive victory when they raced into an 8-0 lead but the Red Devils got back to within two points by half-time and shaded a seesaw second half to gain the spoils.

There were also disappointing returns for ex-Salford forwards Luke Yates and Josh Jones - the latter on his 250th career appearance - as former Huddersfield captain Kevin Brown led the home side to victory.

Salford do the double over top four club @Giantsrl! A picture paints a thousand words!

Buoyed by their recent improved form, the visitors made the early running and went in front with a penalty from teenage stand-off Will Pryce, but they suffered a blow when centre Ricky Leutele, just back in the team after a month on the sidelines, was forced off with a head knock after 10 minutes.

Huddersfield did most of the pressing throughout the first half but it took the introduction of front-rowers Matty English and Nathaniel Peteru to add the punch they needed to turn their territorial dominance into points.

English powered his way over for the game's first try after 23 minutes and Peteru thought he had repeated the feat six minutes later and was penalised for dissent after disputing referee Chris Kendall's decision that he had failed to ground the ball.

The visitors were good value for their 8-0 lead but the Red Devils hit back four minutes before the break when centre Krisnan Inu intercepted Jack Cogger's pass near his own line and sent winger Rhys Williams away for an 80-metre try, which Inu converted to cut the deficit to just two points.

The score worked wonders for Salford's confidence and they went in front within four minutes of the restart when full-back Tui Lolohea sliced through the Huddersfield defence for their second try.

But Inu was wide with the goal-kick and Pryce kicked two further penalties to initially bring his side level and then edge them back in front.

The lead then changed hands for the third time after 57 minutes when Salford forward Jack Ormondroyd won the race to hooker Andy Ackers' grubber kick for his side's third try.

Inu kicked the conversion and added a penalty to put his side six points clear and the Red Devils defended superbly to keep the lead intact.

Both sides ended the game with 12 men after Greg Burke and Leroy Cudjoe were sin-binned for fighting.