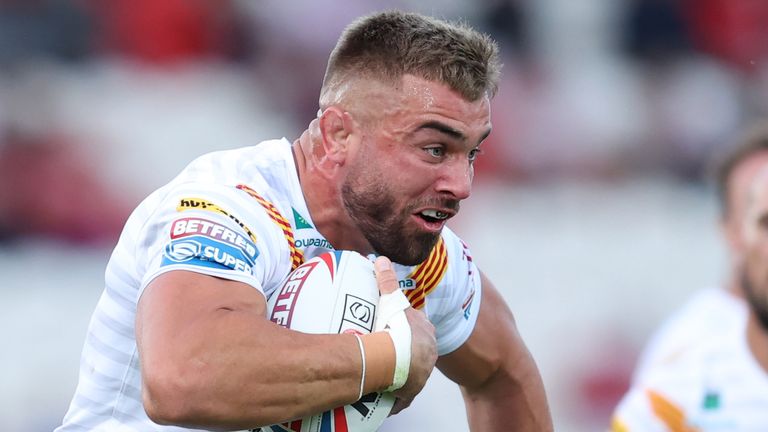 The gulf between top and bottom of Super League was exposed as Catalans Dragons served up a brutal 64-0 battering of Leigh at Stade Gilbert Brutus.

Table-topping Catalans roasted Leigh with an 11-try blitz which extinguished any hopes of a late-season revival following the strugglers' first win of the season last week against Salford.

The game spiralled out of control for Leigh as early as the third minute, when Mike McMeeken was first to cross the line after good work from half-backs James Maloney and Josh Drinkwater, Maloney adding the conversion.

Winger Tom Davies then went close but could not control a loose ball in the Leigh in-goal area.

However, he forced the visitors into dropping out from behind their own line and a simple switch to the left saw Fouad Yaha side-step his way over by the corner flag. Maloney added yet another impressive conversion from the touchline to make it 12-0 with only nine minutes gone.

Leigh then squandered possession with a knock-on on their own 20-metre line and the ball was quickly moved to McMeeken, who sliced cleanly through the defence for his second try, Maloney again accurate with the conversion.

McMeeken was involved again with the next try for Catalans as he steamed behind the posts and back-heeled a loose ball up into the hands of Maloney. who touched down and converted his own try to make it 24-0 halfway through the first half.

French prop Jordan Dezaria was running riot as Leigh's defence struggled to contain the Dragons' pack and, when the Centurions were penalised for a shoulder charge off the ball, it was almost too easy for Catalans to spin the ball to the left for winger Yaha to score his second try, Maloney missing his first kick from out wide.

Yaha hit his hat-trick in the 33rd minute after Catalans resisted a mini Leigh revival, testing Maloney's kicking skills once again from the touchline. This time the Aussie veteran was back on target to make it 34-0.

McMeeken quickly followed with his third try of the game when he climbed highest to catch a Sam Tomkins high kick and crossed to score, and Maloney's sixth successful conversion of the half made it 40-0 at the interval.

Leigh lost control of the ball in the first set of the second half and Catalans went close twice as Leigh were forced to drop out three more times from behind their own posts.

But it took 12 minutes before Leigh's defence cracked when Michael McIlorum put Joel Tomkins through a gap for a close-range try, Maloney converting to make it 46-0.

Then came the try of the night when Sam Tomkins started and finished a dazzling attacking move to score by the posts and Maloney added two more points with the boot.

Sam Tomkins scored a second two minutes later, striding through a huge gap in the Leigh line, with Maloney's conversion taking the Dragons to 58 unanswered points.

Things got worse for Leigh when Arthur Mourgue came off the bench to torment their tiring forwards, who could not grasp Davies on a 75-metre strike four minutes from the end, Maloney adding his 10th conversion.