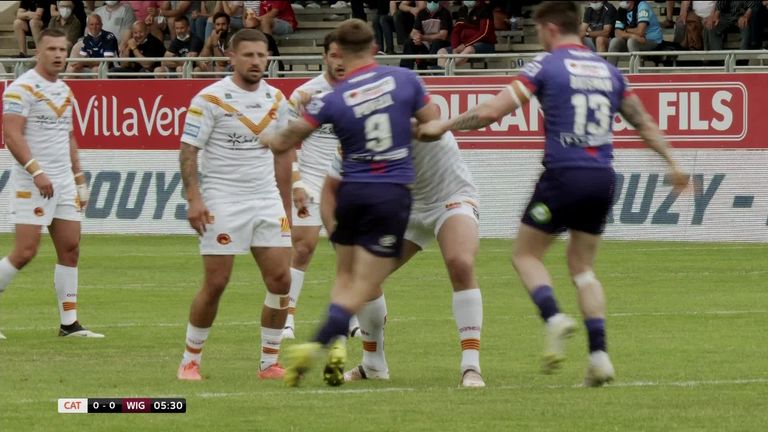 Wigan Warriors' unbeaten start to the Betfred Super League season came to an end as Catalans Dragons proved too hot to handle in a 48-0 thrashing at Stade Gilbert Brutus.

Wigan seemed to wilt in the 30-degree heat and humidity of Perpignan, losing their unbeaten run with a jaded performance riddled with indiscipline and handling errors.

A late sending off for full-back Zak Hardaker for an apparent head-butt on his England rival Sam Tomkins only added to the Warriors' woes.

To rub salt in their wounds it was former Warriors players who did most of the damage as ex-Wigan stars Michael McIlorum and Tomkins scored early tries to put their old team on the back foot.

Tomkins got his second just before half-time to give Catalans a 16-0 lead at the break.

Not even the return from injury of captain Thomas Leuluai could inspire Wigan as they fell further behind to a James Maloney penalty following a dazzling midfield dash by Arthur Mourgue which could only be stopped by a high tackle.

They could not stop him two minutes later when the electric young Frenchman dummied the entire Wigan defence and stepped over the line from five metres out.

At 24-0 Catalans could afford to cool off but Josh Drinkwater switched on the afterburners with a simple grubber and touchdown through a gaping hole in the Wigan defence, Maloney's conversion making it 30-0.

Two minutes later Drinkwater doubled his tally with a powerful 10-metre surge over the line, Maloney again adding the conversion.

Another former Wiganer, Tom Davies, then cut loose on a 40-metre run down the right wing and provided the pass for Mike McMeeken to crash over untouched.

Despite the best efforts of Jackson Hastings and John Bateman, Wigan lacked direction and too often possession was lost through sloppy handling.

Three penalties in a row put Wigan in promising positions towards the end but their handling let them down in the face of ferocious defending from the Dragons.

The step from Mourgue 🔥

Then Bateman threw the ball into the face of Benjamin Jullien and Catalans were back on attack with young French winger Mathieu Laguerre scoring the coup de grace with a try in the left corner.

Catalans have beaten Hull, St Helens and Wigan in their last three games and, with a week off because of the Challenge Cup to allow Matt Whitley and Fouad Yaha to return from injury, the Dragons are looking a real threat.

As for Wigan, they will need to use the cup hiatus to reassess their handling and discipline if Adrian Lam's side are to get back to winning ways.

They may have to do without Hardaker as he appeared to clash heads with his England full-back rival Tomkins at the end of the match and received a red card. Sam's brother Joel was sin-binned for retaliation.