Player-of-the-match and Golden Boot winner Jack Brown inspired England to a big win over old rivals Australia in their first match of this year's Wheelchair Rugby League World Cup; Spain opened the tournament with a win over Ireland in the other Group A match

England lived up to their billing as favourites to win the wheelchair tournament of the Rugby League World Cup with an impressive 38-8 victory over Australia on the opening day of the competition.

Man-of-the-match Jack Brown was the star of the show at Copper Box Arena with two tries during an all-action display, while Joe Coyd and Nathan Collins also helped themselves to doubles.

Collins produced 16 points in total with Lewis King the other try scorer for Tom Coyd's side on what proved a record-breaking day with a crowd of 3,033 across both games at the Olympic Park venue, setting a new best attendance for a wheelchair rugby league fixture.

Seb Bechara signalled England's intention with a huge hit on Australia's Zac Schumacher in the first minute and despite the hosts squandering two early openings, it was the visitors who got the scoring started in London.

Diab Karim made the most of Rob Hawkins' failure to claim a high pass by going over in the corner to put the Wheelaroos ahead by the 10-minute mark.

It only proved to further jolt head coach Coyd's team into action though and it was the younger brother of the England boss who flipped the momentum with two tries in three minutes.

Joe Coyd brilliantly swivelled in between Australia duo Karim and Brad Grove to open the account of the home team in the tournament after 19 minutes and repeated the trick soon after. 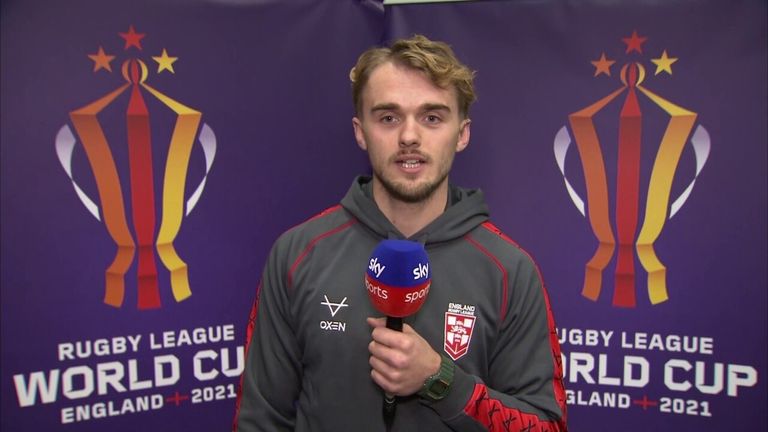 England were going through the gears now and the introduction of Brown as an interchange player only served to increase their threat. He crossed twice in between fellow replacement Collins getting in on the act to ensure a healthy half-time lead of 20 points had been established.

It would have been more had Brown not been denied a treble by some last-ditch Aussie defending, which saw both posts floored alongside the first winner of the wheelchair Golden Boot award.

The hosts were eager not to let their advantage slip in front of a youthful and exuberant Copper Box crowd and quickly added to their 26-6 advantage after the interval. Lewis King touched down after 46 minutes before Brown, one of two non-disabled players permitted in the team, took centre stage.

He came closer to adding another highlight to his showreel when he brilliantly worked his way past Peter Arbuckle and Bayley McKenna only to be held up before the try line by Diab.

Moments later though, Brown showed another side to his ability with a huge hit on Australia's chief destroyer McKenna, which saw the Wheelaroos player eventually leave the court.

England were denied a seventh try at the midway point of the second half when Hawkins was tackled just before he jotted down following Bechara's driving run.

But Collins completed his double after fine work from Joe Coyd before another conversion was added by Collins to take his tally for the night up to 16.

Aussie McKenna successfully kicked a penalty in the final seconds to give the visitors the last word but it was England's night after they showed why many are tipping the 2008 winners to claim a second World Cup during the next two weeks.

In the opening game of the tournament between the other two sides in Group A, a 25-point haul from Theo Gonzalez helped Spain kick off their campaign with a 55-32 win over Ireland.

Gonzalez scored two tries and landed eight conversions from eight attempts, along with putting over a late drop goal. David Berty grabbed a hat-trick of tries for Spain too, with Yannick Martin scoring two as well.

Irish skipper Peter Johnston crossed four times for his team and Phil Roberts' score had put them into an early lead, but ultimately Spain proved too strong.

Brown: England lived up to the hype

Player-of-the-match Brown believes England laid down a marker with the impressive manner in which they beat Australia in their opening game of the World Cup.

"It was an important win," Brown said. "It sets the tone and shows what England are about.

"The crowd was incredible and we've never had anything like this. It is a dream come true.

"It is something when I was a 15-year-old kid playing this sport for the first time, I never imagined anything like this, it was just a push around but this is something really special.

"We said we wanted to come in and put on a good show for everyone. We really wanted to live up to the hype. I think we did that and the Aussies did a good job of matching that too."

England head coach Coyd praised the impact of the record-breaking crowd on a day where the wheelchair tournament got underway to join the rugby league takeover in this country after the men's and women's World Cups got started last month.

It is the first time all three have occurred simultaneously in what is the fourth edition of the wheelchair World Cup.

"As a spectator I thought the atmosphere was unbelievable," Coyd said. The Copper Box is such a good place to play sport. We know that from the Olympics and the crowd really showed up. The boys felt that as well."