Hull FC's Brett Hodgson spent the final three years of his playing career with the Wolves, winning the 2012 Lance Todd trophy in Warrington's Challenge Cup-winning campaign, but his current and former sides could not be separated despite two extra five-minute periods as it finished 14-14 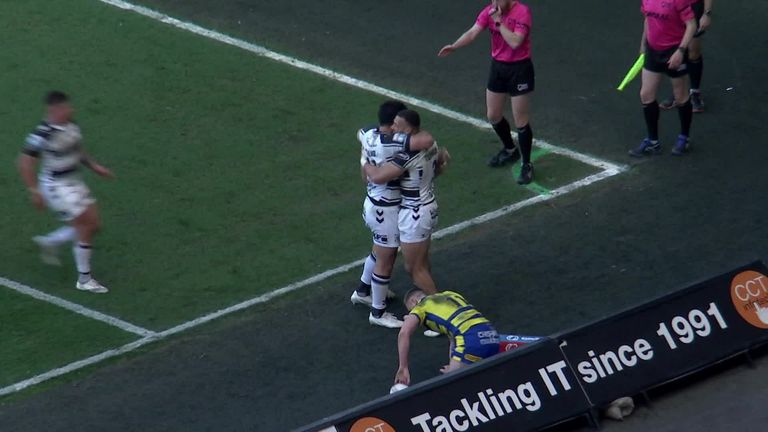 Hodgson spent the final three years of his playing career with the Wolves, winning the 2012 Lance Todd trophy during Warrington's successful Challenge Cup campaign, but his former employers and current side could not be separated despite two extra five-minute periods as the contest finished 14-14.

The first half was devoid of any attacking impetus as they shared a penalty apiece from Marc Sneyd and Stefan Ratchford before Jake Connor and Chris Hill traded second-half tries.

Carlos Tuimavave crossed in the corner with 11 minutes remaining as Hull looked set to make it three Super League wins from three under Hodgson.

However, Jake Mamo slipped through the Hull defence with two seconds remaining to cross and Gareth Widdop converted to level the match after regulation time.

In total, Hull and Warrington had nine attempts between them to snatch victory but neither could convert.

Widdop could not hold onto Ratchford's crossfield delivery and knocked on in one of the few glimpses early on.

The deadlock was finally broken in the 25th minute when Sneyd kicked a simple penalty, taking him to ninth on the all-time Super League list of goals with his 670th successful attempt.

Warrington were level in the 32nd minute with a penalty of their own through Ratchford in a first half dominated by defence.

Widdop almost grabbed the opening try two minutes later with a moment of brilliance as he raced onto his own chip over the Hull defence but could not ground the ball in time as the first half finished 2-2.

Connor tried to offload a sweeping Hull move from right to left but a Warrington hand got in the way before the hosts spurned another half-chance when the full-back fumbled a smart reverse kick from Sneyd.

The home side's pressure eventually told when Connor scored the opening try in the 56th minute but it was Jordan Lane who provided the legwork.

Jack Brown spilled the ball backwards while under pressure from four Warrington defenders, which set up the break with Lane finding a tremendous line to breach the Wolves line.

The second-rower still had half the pitch to cover as he steamed ahead and his neat footwork twisted up full-back Ratchford before feeding the supporting Connor to dive over.

Warrington hit back five minutes later when Daryl Clark managed to wriggle free under the posts, despite four Hull defenders holding him up, to offload to Hill to dot down and level the scores at 8-8.

Hull nudged back in front for the third time with 11 minutes remaining when Lane produced another devastating line-break to get the hosts inside Warrington's 20-metre line.

His offload sparked a flurry of quick hands to create a three-man overlap on the right edge, with Andre Savelio finding Tuimavave who dived over in the corner.

Mamo's quick feet created half-a-yard to sneak past Josh Griffin and Connor for the last-gasp try, which Widdop converted for the extra Golden Point periods.

Blake Austin was off target with his drop-goal attempt before Sneyd scuffed his effort into the post padding.

A penalty from Hull gifted field position to Austin for another chance of a winning one-pointer but his effort drifted wide, with Connor trying an audacious attempt from 60 metres.

A second five-minute period was needed with Sneyd primed for another match-winning kick but he too went wide before Widdop and the Hull half-back shanked further attempts.

Sneyd should have won it as Hull worked upfield but his effort slid wide, despite celebrations on the touchline from his team-mates, while Savelio magnificently blocked Austin as the two teams shared the spoils.