Hooker Leeming, who had scored a try earlier in the match, got the crucial one-pointer for Leeds after missing two earlier in golden point; The Rhinos had trailed by 10 points in the second half before fighting back

Kruise Leeming's first-ever drop goal in the second period of golden point extra-time gave Leeds Rhinos' prospects of reaching the Super League play-offs a huge boost as they closed day one of Magic Weekend in Newcastle with a dramatic 25-24 win over Hull FC.

Just two points separated the sides at the break after Marc Sneyd kicked his second penalty of the afternoon with the last action of the first half to put Hull FC into a 16-14 lead, followed by another penalty and a converted try from Connor putting them 10 points clear early in the second half.

The Rhinos fought back through tries from Leeming and Jack Broadbent to send the match into extra-time, with the former slotting over the crucial one-pointer after missing two previous attempts to help his side cement their top-six place and deal a blow to Hull's hopes of being involved in the post-season shake-up. 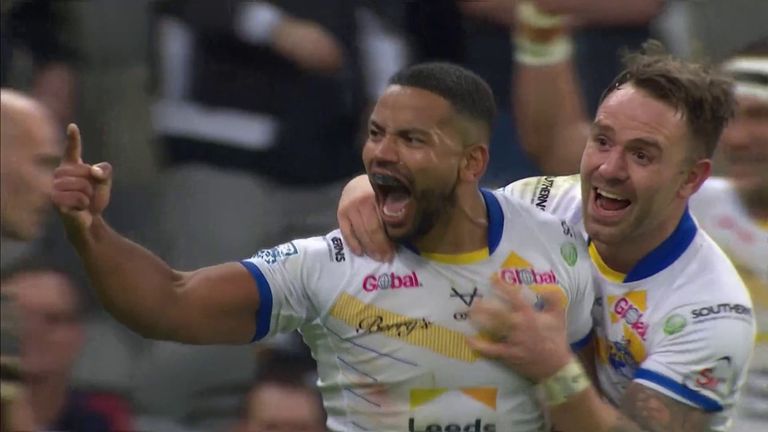 Rhyse Martin put the Rhinos ahead seven minutes into the match, with Richie Myler and then Robert Lui working the ball out to the right for the Papua New Guinea international to force his way over along with converting his own try.

The second row, whose one-year contract extension with Leeds was confirmed on Friday, then kicked a penalty two minutes later after Myler was taken out off the ball by Jake Connor, who was lining up in the halves for Hull FC with Josh Reynolds out and Jamie Shaul available again.

Nevertheless, the Black and Whites struck back in the 11th minute as scrum-half Myler failed to take a testing grubber kick from Sneyd cleanly and Houghton gratefully snaffled the loose ball to dot down under the posts to give his scrum-half a simple conversion.

Sneyd levelled things up shortly afterwards from in front of the sticks following a penalty against the Rhinos for interference after a tackle and then Hull surged ahead midway through the half as Tuimavave collected the ball from Connor's tap back to finish for a converted try wide on the right.

The see-saw nature of the contest continued in the 27th minute when centre Newman showed his strength by breaking free from a tackle and stepping on the gas to power in for the Rhinos' second try, with Martin again converting to bring the sides level.

Connor then had a possible try chalked off for a knock-on, but another Sneyd penalty from in front of the posts restored a slender lead for Hull as the hooter sounded for half-time. The half-back then added a third six minutes into the second half to keep the scoreboard ticking over.

Three minutes later, stand-off Connor extended Hull's lead with another converted score as he threw a dummy then used his strength to get over with two Leeds defenders around him. However, the Rhinos were not out of this one yet.

On 55 minutes, Newman went from scorer to provider, slipping out a deft offload to send hooker Leeming over close to the right corner flag for a try which was followed by Martin landing the conversion from out wide.

Then, after Tom Briscoe had a possible try ruled out by the video referee, full-back Broadbent took a pass from Myler and darted through a gap in the Hull defence to level scores with eight minutes of the contest remaining.

Martin was unable to convert and with neither side able to make the breakthrough before the final hooter, it meant a match on the first day of the year's Magic Weekend once again would be decided in golden point extra-time.

Leeming and Myler both missed drop goal efforts for Leeds in the first additional period of five minutes, with the former then seeing another attempt hit the crossbar on the hooter after Newman had charged down one from Sneyd at the other end and sprinted up field.

It was a similar story early in the second period of extra-time as Sneyd saw a long-range attempt fall short, but Leeming made no mistake at the third time of asking as he slotted one over from around 20 metres out to give the Rhinos' play-off hopes a boost. 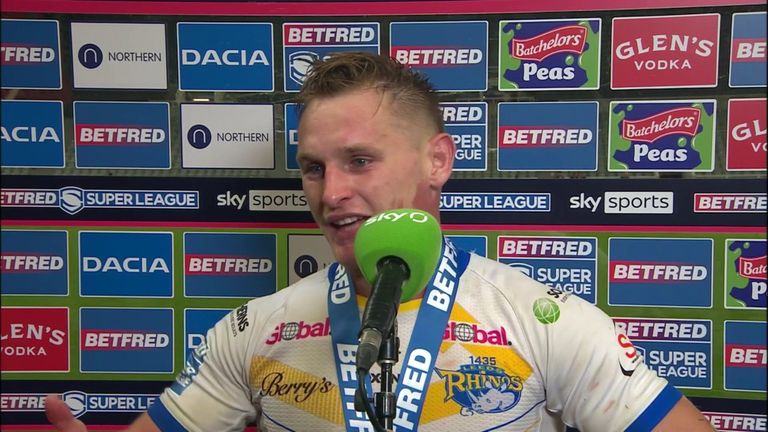