"Castleford deserved that win. It is a harsh lesson to learn because we really needed to be up for this game but we weren't."

Brett Hodgson has not given up hope of Hull FC making the play-offs after his team lost to Castleford on Thursday.

Hull FC scored either side of half-time through Adam Swift and Jake Connor but Castleford were not to be denied and ran out worthy victors.

"That was a disappointing performance - we were way off our best today," said Hull FC coach Hodgson.

"We just lacked energy. We spoke about making sure we were up for a good challenge and all the effort areas we were beaten at tonight which is disappointing for us as a group.

"Castleford deserved that win. It is a harsh lesson to learn because we really needed to be up for this game but we weren't.

"We will go back to the drawing board and make sure we are ready to go on Monday again. We have got four games left and if we win four games then we are in."

Castleford boss Daryl Powell will wait to discover the seriousness of an abdominal injury sustained by England hooker Paul McShane during the 23-12 win.

The loss of McShane during the opening quarter left Powell facing a nervous wait ahead of Monday's home clash with Wigan, which he looks certain to miss.

Powell said: "We are not exactly sure of the injury but it's in that area of abdominal/groin, so they are sort of all interconnected together.

"We will get an idea when he's had a scan, but Paul McShane doesn't come off unless he's injured.

"I expect it could be a decent injury and he will miss the Wigan game on Monday, but Adam Milner was class when he came on." 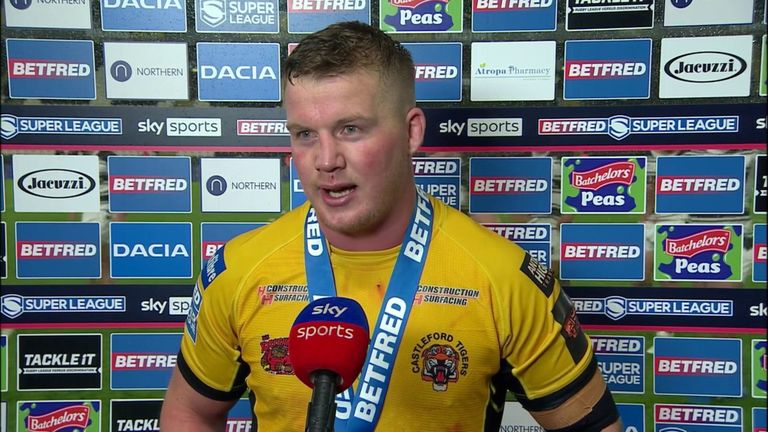 Jordan Turner struck twice during the first half either side of a well-taken effort from Swift and continues to prove an astute acquisition.

The 32-year-old centre or winger was signed from Huddersfield at the end of last season and helped Castleford to reach last month's Challenge Cup final, where they lost to his former club St Helens.

Powell added: "Jordan is coming up with big plays and I think he's playing some of the best rugby of his career.

"It was a tough game which ebbed and flowed and I thought we showed great courage and resilience.

"We were so tough tonight and the boys are handling these short turnarounds really well.

"After losing the Challenge Cup final at Wembley, the boys agreed we could knuckle down and have a real go at making the play-offs. There is a long way to go, but we have a chance."