Huddersfield 42-24 Leigh: Giants end on a high against relegated Centurions 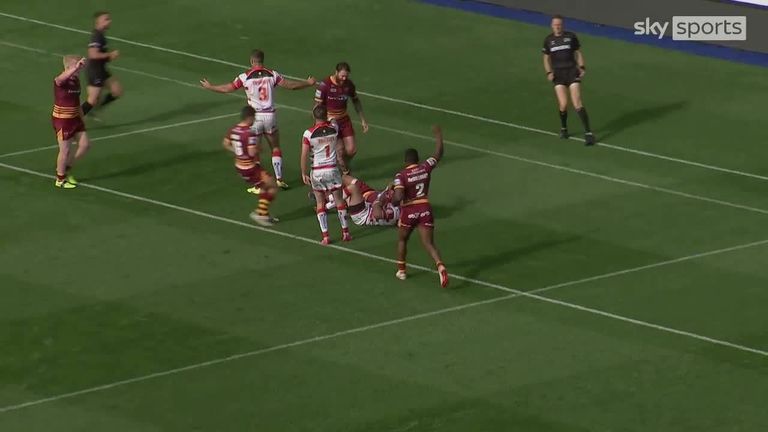 Huddersfield ended their 2021 campaign on a winning note as Louis Senior scored two tries and Olly Russell contributed 14 points in a 42-24 victory over relegated Leigh.

Half-back Russell was outstanding and assisted three of the Giants' eight tries in addition to his own touchdown and five goals.

Leigh, under interim head coach Kurt Haggerty, return to the Championship after winning just two of their 22 games.

They led twice in the opening period and ran in five tries overall but rarely threatened to end a 21-year wait for victory on Huddersfield soil in what is scheduled to be their final top-flight game until at least 2023.

Winger Senior acrobatically touched down after four minutes, with Russell missing the conversion.

Undaunted, the Centurions took the attack to their hosts. Twice they went close before Australian prop Jai Whitbread thundered over from James Bell's pass.

Stand-off Ryan Brierley, who spent 12 months as a Giant in 2016 and is expected to leave Leigh for pastures new next season, converted.

The lead last just three minutes until Russell angled a kick towards the posts and veteran centre Leroy Cudjoe jumped highest to ground for a try which Russell converted.

Leigh were looking to make it third time lucky against their hosts this season after a Challenge Cup exit and defeat in the reverse Super League fixture.

So there was visiting optimism when Iain Thornley crossed unopposed for Brierley to again add the extras.

And it became a double-score lead for the first time when Ricky Leutele played in Russell for the half-back's touchdown.

Russell converted both and then directed a kick towards Senior for the winger to grab a second try after 48 minutes.

If Huddersfield were not already home and try they were after 56 minutes.

Substitute Jack Ashworth, playing against his parent club, was sin-binned for a shoulder charge.

Almost immediately Joe Greenwood rumbled over for the Giants' sixth try and, even though Russell missed the kick, a 32-12 lead was never likely to be clawed back by Leigh.

The Centurions, however, outscored the home side in the final quarter, with winger Brendan Elliot's double and another for fellow Australian Sam Stone.

Leutele and Will Pryce added further tries for Huddersfield, who finished with 12 men after their other Leigh loanee, Nathaniel Peteru, was yellow carded for his part in a late brawl.