From his junior days with Croydon Hurricanes to starring on the world stage for England, Kai Pearce-Paul has made impressive progress in his rugby league career; the 21-year-old has drawn comparisons from some quarters with one of the sport's greats as well

With his deft offloading ability, strong ball carrying and tough tackling, it is perhaps no surprise Kai Pearce-Paul has drawn comparisons to one of the greats from some quarters.

The 21-year-old Wigan Warriors player has been tagged as 'The English Sonny Bill Williams', with the New Zealand cross-code icon being one of the players Pearce-Paul admired as a youngster.

It is a comparison he takes in his stride, although Pearce-Paul is more concerned with being his own man rather than measuring himself against Williams or anyone else.

"I hear that a bit from my friends as well because I like to offload and it's something he did," Pearce-Paul said. "He was the master of that, really, and I've had a few comparisons in my time.

"He's a great guy, an unreal player, and he's done it all, really. He was someone I looked up to as a kid.

"I don't like to compare myself, and if people want to say it then it's okay and they can do that. But I'm my own player and he's a great player as well, and I've got a lot of respect for him."

Pearce-Paul is now a fully-fledged international player too after making his England Test debut in the 94-4 win over Greece on Saturday which secured top spot in Group A of the Rugby League World Cup, capping a memorable day with a try and two assists.

It is the latest step on a journey which began for the Bromley-born second row or centre as a junior player with community club Croydon Hurricanes and continued with him joining the academy set-up at London Broncos.

Impressive displays in the U19s competition for the Broncos and for Lancashire in the Academy Origin series led to Wigan bringing him in on an initial four-year contract in 2019, and Pearce-Paul has become an established first-team regular since making his debut in September 2020.

His performances this year earned him a place in Shaun Wane's 24-man England squad for the World Cup and after sitting out the opening win over Samoa and being 18th man for the match against France, he finally got the chance to fulfil a long-held ambition against the Greeks at Bramall Lane.

"It's been a long journey, and this is something you can only dream of, playing as a young boy for Croydon Hurricanes and down in London," Pearce-Paul said.

"I was a young kid thinking one day I wanted to play for my country and now it's something which has become a reality.

"It was something which took a while to hit me but running out on that pitch and having the crowd roaring, it all became so real and that was a great feeling."

Pearce-Paul is not the only player from outside rugby league's northern heartland in England's squad, with Basingstoke-born former Broncos back row Mike McMeeken another one who has blazed a trail too.

But although he was in the minority among his friends in playing the 13-man code growing up, his progress has attracted plenty of attention from them. 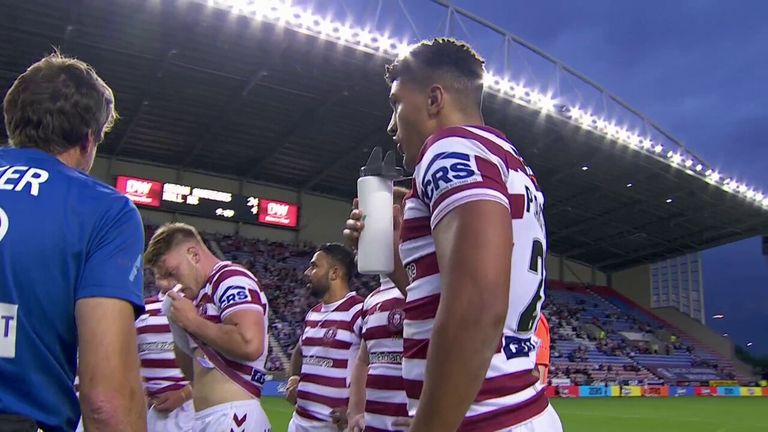 "As a kid, I was one of the only ones of my mates who played rugby league and they all really respected how good the game was," Pearce-Paul said.

"Obviously it's not as big down in London, but I've had a lot of messages from old friends and rugby union friends saying congratulations and watching.

"The support is there, which is nice, and it's good having old friends, teachers and family watching me play."

Pearce-Paul will now hope he has done enough to retain his place in Wane's matchday 17 when England head to his second home of Wigan for the quarter-finals on Saturday, November 5, where Papua New Guinea are their most likely opponents.

He already knew Wane from the 58-year-old's role as the Warriors' leadership and management director and is enjoying his time being coached by the man who guided Wigan to three Super League Grand Final triumphs as part of the England squad.

"It's been really good," Pearce-Paul said. "He's an honest man and very straightforward - he tells you how it is.

"The boys respect that about him and that brings the respect of wanting to play for him. That's a way of paying him back, playing well and doing what he coaches us.

"It's what you expect with Waney. Having him around Wigan, I always knew the kind of guy he was and he's a great guy, and it's the same at England.

"It translates onto the pitch in how we're playing in these last few games, which is really good."