Kieran Dixon has spent a large part of his life proving people wrong.

Told he was "too small" to make it in rugby union - where he made it to county representative level as a schoolboy - and initially in rugby league, the goal-kicking winger is now one of the stars of the London Broncos team.

It is a similar story for the club as well. Written off as relegation fodder by many pundits ahead of the 2019 campaign after winning promotion back to Super League, the Broncos made the top flight sit up and take notice after beating Wakefield Trinity 42-24 in the season opener.

Defending champions Wigan Warriors, dominant League Leaders' Shield winners St Helens and Catalans Dragons on their home turf have all fallen victim to the Londoners, who head into the final two rounds of the regular season with their destiny still in their own hands.

"We got written off before we'd even touched a ball in the top flight, people said we wouldn't win a game and there would be no other club near us," Dixon said.

Like many youngsters from Hackney, Dixon's early sporting dreams involved playing with a round ball at his feet rather than an oval one in his hands.

He got into playing the 15-man code through a friend, but the visit of community rugby league coach and former professional Callum Irving to their secondary school led to them heading down that path instead.

"It was fun," Dixon said, recalling his first experience of league. "You got to run into people, run around people, push people over, tackle them over - it was a lot different to football. 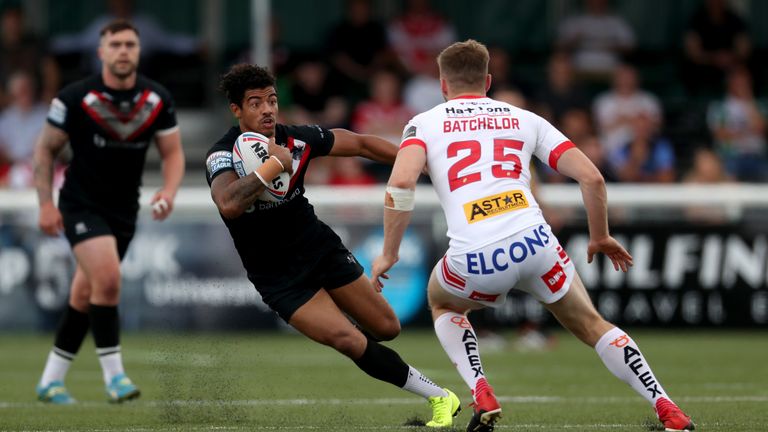 "We got written off before we'd even touched a ball in the top flight, people said we wouldn't win a game and there would be no other club near us. Round One, we were able to prove a lot of people wrong and that was a special day."

"I was told I was pretty good at it, so it started in secondary school and just went from there."

Having returned to the Broncos in 2017 after two season with Friday's opponents Hull Kingston Rovers, Dixon is one of a core of players from London who have come through the youth system to play for the club.

Full-back Alex Walker is another. He went to school with ex-Broncos and now Bradford Bulls' Enfield-born half-back Joe Keyes, who convinced the promising footballer to take up rugby league.

Good enough to earn a trial with Ipswich Town in his youth, football's loss has proven to be the Broncos' gain and the Scotland international is delighted to be playing a part in helping the Ealing-based club try to establish themselves back in Super League.

"I've been here since I was 15," Walker said. "Being back in Super League is definitely where the club belongs, and it means a lot for us to stay in Super League and keep fighting to stay up.

"It's been a tough journey. My dad has been driving me around the M25 countless times, we've been at Feltham, Barnet and to be settled here with the scholarship and academy, it's fantastic and what a club should be like."

When they were relegated from Super League in 2014, having been founder members of the competition when rugby league switched to a summer sport in 1996, there were many questions about what the future held for the sport in the capital on a professional level.

Along with proving they are capable of mixing it with the rest of Super League, the team have won many admirers around the division as well.

"I think a lot of fans around the league are taking London on as their second team," Broncos media manager Neil Reynolds said.

"I do all of the social media and every single day of the week now it's 'I hope you stay up; we really want to see London in the top flight; we've loved coming to London; London have been a breath of fresh air'.

"It's continued throughout the season, so I think we can safely say London has brought something to Super League 2019."

Ward, who has been with the Broncos since they were still playing at the Twickenham Stoop as Harlequins RL, is optimistic the club have got some stability off the field as well at the Trailfinders Sports Ground after a nomadic history.

"We've got a great facility here on the 4G as well and the owner is developing the ground as well, so it is a fantastic set-up here," Ward said.

"The core of the club is still there and what we're all about. It's the same owner, same people working here and the same fans, who are passionate London rugby league whatever name it comes under.

"We believe in rugby league in the capital, we think it's good for the game and we want a competitive club around here."

Still all to play for

Despite all of the positives to come out of this year though, the Broncos remain in danger of dropping back into the Championship after just one season.

Last Sunday's 36-10 defeat at home to Leeds Rhinos left the team two points adrift of Hull KR and final-week opponents Wakefield at the bottom of the table, making those must-win games.

It is a similar situation the team found themselves in last year to make the Qualifers and then the Million Pound Game, and Walker is optimistic those experiences will benefit them for the trip to KCOM Craven Park.

"We've won a fair share of games a lot of people didn't think we would, but it's going to come down to these two games how we sum up the season, really," Walker said.

"We've been involved in a lot of big games over the past few years and a lot of must-win games, so I think the boys have got a lot of experience in these big games and hopefully that will get us over on Friday."

Dixon is candid about the prospect of being relegated, but he knows it is within both him and the club to rise to the challenge of those saying the Broncos are not capable of avoiding the drop.

"The thought of relegation is scary and it's something you wouldn't wish upon anybody," Dixon said.

"It's part of the game, you can't help that, and we've got two games to prove a lot of people wrong and prove to ourselves we are worthy of being here."