England coach Wayne Bennett admits the national team have gone backwards as Great Britain as he waits to find out if he will remain in charge.

The veteran Australian made the admission after watching the Lions go down 23-8 to New Zealand in the second Test in Christchurch to lose the series 2-0.

After guiding England to the 2017 World Cup final and a 2-1 series victory over the Kiwis on home soil 12 months ago, Bennett had hoped to use the return of Great Britain after a 12-year absence as key preparation for the next World Cup in 2021. 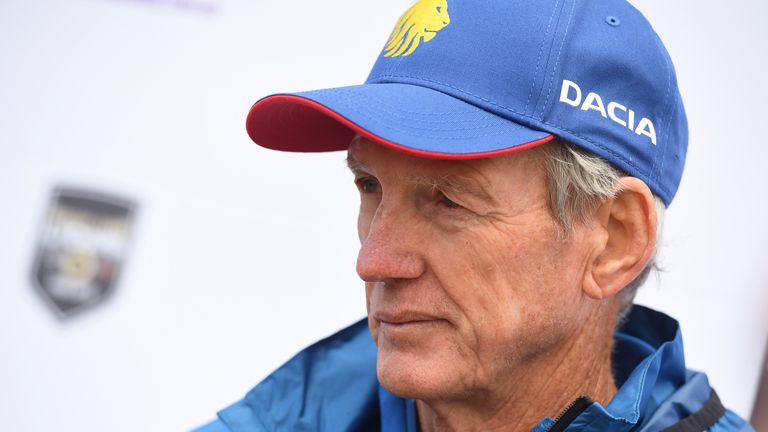 "If we have to have a stumble, this is the year to do it in."

Before then, England host the Kangaroos in a revived Ashes Series next autumn and Bennett is still waiting to hear from the Rugby Football League if his contract will be renewed.

"That's a decision they've got to make," he said. "My contract finishes next week so we'll see what they want to do."

Bennett's men started their four-match tour with a 14-6 defeat by a Tonga Invitational XIII and now move on to Papua New Guinea where they will hope to avoid a whitewash.

They trailed 20-2 at the Orangetheory Stadium after conceding tries to Joseph Manu, Shaun Johnson and Ken Maumalo before staging a brief revival sparked by a 50th-minute try from Josh Hodgson.

"They played much better than we did, that's probably the best way to sum it up," Bennett said.

"We didn't get off on the right foot against Tonga two weeks ago and we haven't picked it up from where we were the last time we played, respecting the opposition enough to realise how much discipline we've got to play with.

Bennett, who has made no secret of his desire to stay on as England coach, insists there are positives to take from the Lions tour as he looks to the future.

"We can take a lot out of it," he said. "The next year and obviously the World Cup years are the prime years. We've brought a lot of players here who haven't played before and tried a few new combinations.

"If we have to have a stumble, this is the year to do it in.

"We've lost obviously Sam (Burgess) and Sean O'Loughlin, which are big losses for us, but there's a strong group of players that will get us through the next two years.

"I just want to try to get them altogether at one time and go from there.

"I think one of the things that has affected us this year is that we didn't have a mid-season Test and also I think our preparation time probably wasn't long enough to go into the Tonga game.

"But their attitude to training and all the other stuff is outstanding. Their behaviour, all the things you want out of your footy team, they match up on, we've just got to get back to playing the way we did before."

"I thought he [Austin] was one of our best ball carriers," he said. "He made a real contribution.

"John Bateman is always one of my favourites. He's still playing when everybody else has stopped."

Bennett says half-backs George Williams and Jake Trueman will almost certainly play against Papua New Guinea after being the only members of his initial 24-man squad not to get a game so far.

"There won't be any wholesale changes," he said. "I'll make a few because a couple of the boys haven't had a game.

"I don't want them away for a month without giving them a game of football. They are quality players and I need to see how they go."