It is fair to say Will Lovell's journey from promising junior to captain at London Broncos has hardly followed a conventional route.

Not just because he hails from the rugby union hotbed of Northampton, but also due to having to contend with injuries and being released by the club earlier in his career.

All of those hurdles have been successfully overcome, however, and seen him handed the captaincy for the 2020 season as the Broncos fight to regain their Super League status - although even Lovell cannot believe how he has come to arrive at this point.

Overwhelmed with all the support! Can’t wait to get started 👍🏻🏉 https://t.co/ovD2qPKPLl

"It's crazy," Lovell told Sky Sports. "These are the conversations I have with my parents and say 'how has it come around this way?'

"Everything happens for a reason, as they say, but it's been a fantastic journey so far and hopefully we can go well again this year.

"Coming through the system at London from the U16s, the U18s and the reserves, it's something you never really expect. It's a huge honour for me and my family, and I'm really proud about it."

Originally a promising union player at Northampton Saints, Lovell got his start in the 13-man code playing in the junior set-up at amateur club Northampton Demons and was then picked up at U16s level by the team which at that time were known as Harlequins RL.

A sign of how highly-regarded the second row was came aged just 19 when he made his debut for the re-formed Broncos at Magic Weekend in 2012, featuring off the interchange bench in the 42-18 defeat to Catalans Dragons at Manchester's Etihad Stadium.

Lovell would go on to make 10 further Super League appearances for the club that season, but injury problems led to him being released following the team's relegation to the Championship in 2014 and moving to the capital's other professional team, London Skolars.

Two seasons of impressive displays for the part-timers in League One saw him return to the Broncos on a short-term deal, only for injury to wreck his playing hopes again and leading to him working in the club's community department.

Nevertheless, he impressed enough in training to earn a full-time contract for 2018 and has been a mainstay of the squad ever since, with head coach Danny Ward hailing Lovell as the perfect person to take over the captaincy following Jay Pitts' departure to Wakefield Trinity at the end of last season. 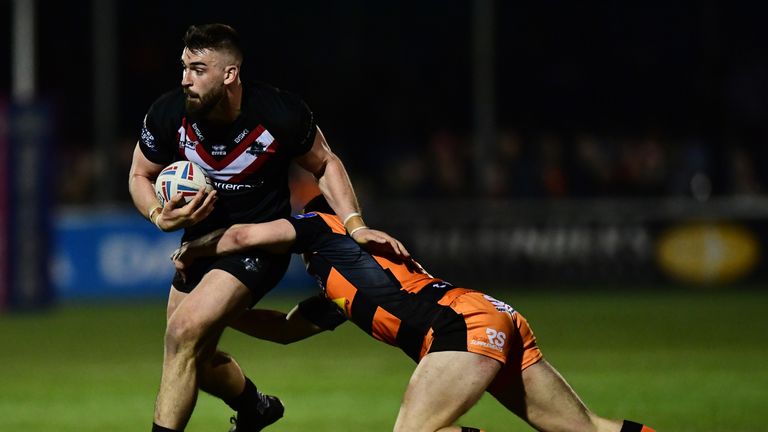 "Everything happens for a reason, as they say, but it's been a fantastic journey so far and hopefully we can go well again this year."

"He leads by example," Ward said. "He's a fantastic bloke, to start with, which is what we're all about at London.

"You want the right people on board with the right character and he's a great ambassador for the club. He works hard and the lads have respect for that, and he's come through a lot of adversity.

"It takes a lot of character to deal with that adversity and to work hard to get himself where he is. I'm proud of what he's achieved and I'm sure he'll be a fantastic captain."

For his part, Lovell has taken all of those challenges in his stride and almost looks upon injuries as little more than an occupational hazard for a professional rugby league player.

He hopes his experiences can help the younger members of the squad through any adverse circumstances in his role as skipper as well.

"There have definitely been a few curveballs in there along the way, but that's part of the job isn't it?" Lovell said. "Injuries and things like that happen, and you have to get on with it.

"I pride myself on that sort of stuff, just shrugging it off, getting my head down and working hard, so hopefully that side of things I can help some of the younger lads with.

"Then with the experience of Danny, he can help me with the other side of the game and helping some of those other blokes."

The immediate challenge for him and his Broncos team-mates is trying to secure an instant return to Super League, having been relegated on the final day of the 2019 regular season on points difference after finishing level with Hull Kingston Rovers.

That starts on February 2 when they travel to former Super League champions Bradford Bulls in the 2020 Championship opener and Lovell knows the Broncos will be seen as a scalp by the rest of the division.

"We know a target is going to be on our back this year, coming down from Super League, and our aim is to get ourselves back up," Lovell said.

"To come ever so close to that only to lose out on points difference and be relegated was tough to take.

"But that's the goal, to get some sustainability up there and have a London side in Super League for many a year to come."