John Kear will be watching the Pacific Island nations closely in the build-up to next year's Rugby League World Cup, but is convinced the rest of the Northern Hemisphere should be doing the same.

The Wales head coach and his charges will face stiff competition in the form of the Cook Islands, Papua New Guinea and emerging international power Tonga in Group 4 of the 2021 tournament in England.

Tonga forcing themselves into the reckoning along with the international game's big three of England, Australia and New Zealand has made the rugby league world sit up and take notice, helped by regular Test matches against their regional rivals along with the Kangaroos and the Kiwis.

Kear, who combines the job with the same role at Championship side Bradford Bulls, is in no doubt that is the model which needs to be followed closer to home if the likes of Wales are to be able to compete with the top nations.

"What the international game in the Southern Hemisphere have done is work really hard with all of the Pacific nations and have regular internationals which are intense and meaningful, which has obviously raised the standards," Kear told Sky Sports.

"More and more people are putting their hand up to play for Tonga and Samoa, and that makes them more dangerous.

"They've shown us how to do it, now we in the Northern Hemisphere have to do the same with France, Ireland, Scotland and Wales to grow our game so we can match that and make games against the Southern Hemisphere intense, meaningful and where the result is difficult to predict."

Wales are two-time semi-finalists at the World Cup, with their team of cross-code all-stars reaching the last four in 1995 and a squad comprised mostly of England-based heritage players leading Australia at half-time in the 2000 semis before succumbing to the eventual winners.

Since then, there has been little to cheer about at the tournament. The Dragons surprisingly failed to qualify when the World Cup was reborn in 2008, while the 2013 and 2017 editions saw them suffer group-stage exits without winning a game.

Nevertheless, there is much optimism around the current squad going into next year's World Cup - particularly given as there are plenty of Welsh native stars like Regan Grace, Rhys Williams and Gil Dudson.

"They're as Welsh as you can be and they've come through rugby league systems, and that's what we're really proud of," Kear said. 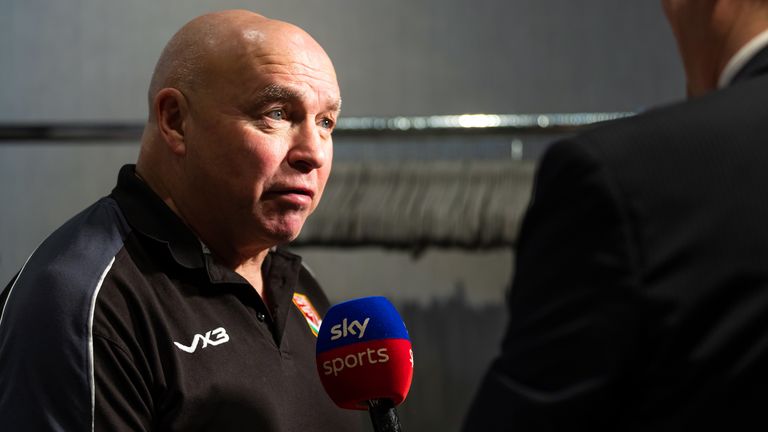 "They're as Welsh as you can be and they've come through rugby league systems, and that's what we're really proud of."

"There are systems and structures in place to develop Welsh players and we're seeing the benefits of that.

"No, we haven't got the likes of Jonathan Davies or John Devereux or the eye-catching names like 1995, but we have got Welsh born and bred players who have come through the system.

"We feel if we stick with it, we'll get to where we are aiming to be which is within the top eight of the international game."

Much work has been done in Wales on developing a pathway for players from the country's small but thriving junior and amateur competitions, through to the professional ranks and the national team in recent years.

The presence of two professional clubs, Wrexham-based North Wales Crusaders and Llanelli outfit West Wales Raiders, in League One is giving further opportunities to players as well, with Kear convinced the growth of the amateur game in Wales will in turn drive those on.

The 65-year-old, who coached England at the 2000 World Cup, is pleased with the progress the Wales team has made since he took over five years ago and sees no reason they cannot make an impact in 2021.

"It's loads better now because they'd hadn't won for something like 10 games," Kear said. "Then we had a really tough European Championship where we were really on our uppers, but gradually we've rebuilt.

"We won the European Championship in 2015, qualified for the 2017 World Cup and were really disappointing in that, re-qualified then had a successful Nines tournament.

"So again I feel there is a rebirth and a growth, and I'm pretty confident we'll do well in this year's European Championship and win the first game at a World Cup since 2000 by a Wales men's team."