Jenna Brooks takes a look at the major issues in the NRL following Round 4, including the latest from St George Illawarra Dragons, the fall-out from Brisbane Broncos' record defeat and news of a new CEO...

What does the future look like for St George Illawarra Dragons?

It's a question everyone is asking after the Dragons lost their fourth straight game of the season, making them the only winless side in 2020.

"It's a horror show, it really is," Braith Anasta said in commentary when St George made yet another mistake with 20 minutes to go.

They lost 22-2 to a Canterbury Bulldogs team who are also under pressure. Dragons coach Paul McGregor said he would understand if the club let him go.

"If they make that decision, I'll understand it," McGregor said. "I'll be disappointed, obviously, but I understand the situation and the conversation that is around every day - which doesn't help the team. I believe in the players and have confidence in my staff. I know how hard they work through the week. We’re just not going out and playing the way we are doing things. That’s the disappointing side of things

When asked if he had lost the support of his players, he was adamant that was not the case.

"No one at the club has come forward and said anything to me," McGregor said.

"I believe in the players and have confidence in my staff. I know how hard they work through the week. We're just not going out and playing the way we are doing things. That's the disappointing side of things."

The Dragons, who have the most experienced side in the NRL, have not scored a try since Round 2 and have only tasted success four times since Round 6 last year. It's not just McGregor coming under the microscope.

Ben Hunt is in the third year of a $6M (£3.3M) five-year deal. Playing at five-eighth he made six runs, two errors and got caught on the last tackle.

Many are suggesting this should be Hunt's last game in first grade for a while.

Up next for the Dragons are the Cronulla Sharks on Sunday. The question is, who gets selected for the game against Cronulla and will McGregor still be coach?

Brisbane were handed their biggest defeat in the club's history on Thursday. They lost 59-0 to the Sydney Roosters.

After the humiliating defeat, the Broncos failed to front the media, causing Brisbane legend Steve Renouf to criticise the behaviour.

"The thing is when the clubs on the front-foot you hear them talking and Locky or whatever, whoever's at the club, show some leadership," Tallis told Fox League. 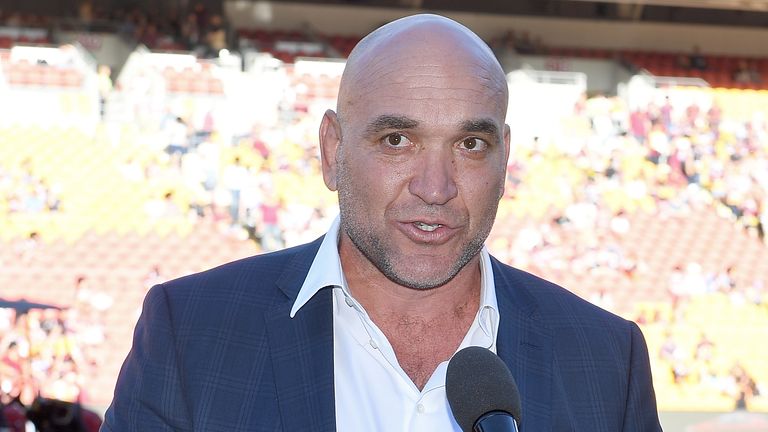 The thing is when the clubs on the front-foot you hear them talking and Locky or whatever, whoever’s at the club, show some leadership

"You don't have good days every day, come out and talk.

"They all ran and hid and no one's facing [the media] - Paul White's not, Darren Lockyer's on the board - Locky you've been there a long time, you're super successful, you're one of our most successful players, one of our greatest players, come down and tell me what's happening at the club."

Broncos forward Matt Lodge defended his team and said it was miscommunication.

"Everyone here's down about what happened and they're copping it on the chin, and you know, hiding from the media," Lodge said. "That was honestly a mistake

"We walked off filthy and just showered, but no request ever came through to the players to come and do media. No one here has ever said 'no, we're not talking to them'. We're not hiding behind anything."

The NRL has not fined Brisbane, instead handing them a warning letter.

Andrew Abdo is set to be named the new NRL chief executive after replacing Todd Greenberg on an interim basis earlier this year.

The Sydney Morning Herald reports an official announcement is still some time off, but Abdo will eventually be given what is known as the toughest job in Australian sport, after the search for the next CEO has been called off.

It's believed Abdo has the support from every club's CEO and chairmen and the message has got back to ARLC chairmen Peter V'landys.

In the two months that Abdo has been the acting CEO, he has been involved in a new broadcast deal and overseen the strict biosecurity protocols which ensured the game got back underway.